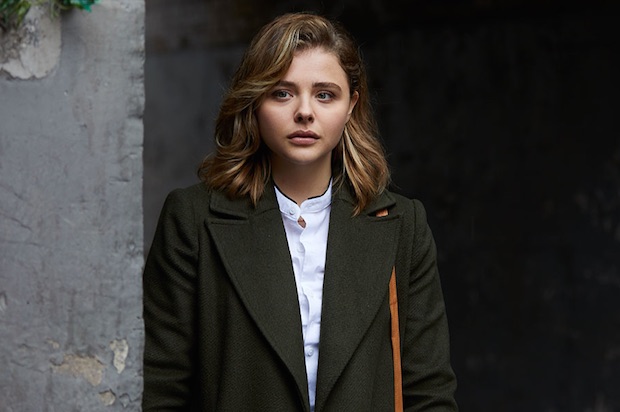 The customer, a petite European redhead, has just been poured a glass of Chablis by her nervous waitron. Taking a sip, she says appraisingly, “It’s like you. Promises a lot, then disappoints.”

The same could be said about “Greta,” a stalker-cum-Bluebeard story with a twist. The customer happens to be the title character, Greta (Isabelle Huppert), a sixty-something widow living in Brooklyn. Her server is Frances (Chloë Grace Moretz), a fresh-faced newbie to the city, currently sharing a trust-fund loft in Soho with her roomie from Smith, Erica (Maika Monroe). 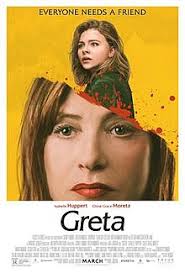 Erica is a yoga enthusiast with a thing for asparagus colonics. But she’s not the sickie here. That’s Greta, as Frances will soon find out.

It begins innocently enough with a purse left on the subway. Inside is a driver’s license, making it all too easy to return the bag to its owner. According to Erica, you find a purse, you either take the cash or call the bomb squad. But Frances wants to do the right thing — take it back to this Greta Hideg.

No good deed, as they say…

Greta is a piano-loving semi-recluse whose only daughter lives in Paris. Frances is a recently motherless millennial, still feeling her loss. It would seem to be a perfect match.

Perfect, that is, for Greta who, we soon learn, is not exactly who she appears to be. When their friendship goes south – it’s a really nifty little “uh oh” moment with a really nasty little chill – Frances discovers “nobody leaves Greta.”

Alas, despite Huppert’s wonderfully weird performance and director Neil Jordan’s slick direction, “Greta” slides too easily from shock to schlock. The film’s early reveal of Greta’s nefarious side gives Huppert a lot of screen time to scenery chew (and she does so with wicked effectiveness). But it also leaves the story with little room to grow.

So Jordan, who co-wrote the script, resorts to gratuitous padding to stretch out his tale (and even then it clocks in at a mere 99 minutes). Stephen Rea, a Jordan stalwart since “The Crying Game,” shows up inexplicably as a private detective who all but has Dead Meat stamped on his forehead. And while the film starts out trying to embrace some sort of logic – say, why the police can’t get more directly involved – it eventually goes off the rails.

Still there’s always Huppert, an Oscar nominee for “Elle” and one of the best of the best.  Whether playing Liszt (anyone who saw her in “The Piano Teacher” will get the willies), or contemplating her next move, she’s almost irresistible. A monster, sure, but somehow difficult to dismiss. No wonder the ending leaves plenty of room for a “Greta 2.”

SPOILER ALERT, PETA DIVISION: If you have a rescue dog or just love animals, you need to know Greta is no nicer to her shelter adoptee than she is to Frances. Just saying…

Previous Article
Hip Hop is one of Atlanta’s greatest exports; so why isn’t it embraced like it?
Next Article
The job wasn’t what he thought