GRTA is marking a few milestones this summer with customer appreciation events at each of its park-and-ride locations. The first events were held Tuesday in Gwinnett County.

The Xpress bus service has now been operating for 10 years. The service has provided more than 17 million passenger trips during that period and now provides about 2 million trips a year, according to GRTA.

The commemorations occur even as mobility remains a major public issue in metro Atlanta. The latest example unfolded Tuesday in Clayton County, when MARTA GM Keith Parker presented an overview of how MARTA could serve the county if Clayton resumes bus service.

Clayton’s board of commissioners is deciding whether to put a transit referendum on an upcoming ballot. Gov. Nathan Deal has signed into law two bills passed this year by the state Legislature that enable Clayton to resume transit service and contract with MARTA to manage it.

To celebrate the 10th anniversary of Xpress service, GRTA staffers and some board members are slated to attend the series of appreciation events. They intend to greet passengers and thank them for riding the Xpress coach buses. Small gifts, candy and other tokens are to be distributed.

The schedule of events is posted on this GRTA website. 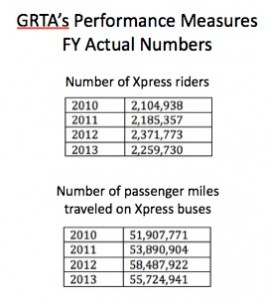 “We are very pleased with how Xpress has been embraced by our customers and by leaders at the state and local level over the past ten years,” GRTA board Chairman Sonny Deriso said in a statement. “Xpress has become an important part of the state’s transportation strategy to improve mobility and lessen the burden that congestion has on people and commerce, and we are excited to see what the next ten years holds for us.”

“Since the first buses started running in 2004, we have been successful because our customers love the service and spread the word to their friends and coworkers,” GRTA acting Executive Director Kirk Fjelstul said in the statement. “Our customers are our greatest asset, and we want them to know how much we appreciate their support.”

The program has expanded in the past 10 years to provide service along 33 routes in 12 metro Atlanta counties.

Deal  provided additional security for the Xpress service in his budget proposal this year. The governor included $8.2 million for GRTA’s bus services in a portion of the budget that makes it easier for the funding for regional transit service to be continued in future years, rather than being debated as a stand-alone item.