Local governments across the nation have yet to fall off the cliff and plunge into default, as predicted in September by superstar analyst Meredith Whitney.

That said, the near- and long-term fiscal future for local governments in metro Atlanta is grim, according to a panel of finance and fiscal experts who met Thursday at Georgia State University.

“Overall, we had these real-world people make presentations and their general conclusion is that it’s not going to get any easier,” said Dr. Michael Bell, a former CFO for DeKalb County and Atlanta who’s now a GSU professor of practice in the Andrew Young School of Policy Studies.

All around metro Atlanta, there are numerous examples of cash-strapped local governments struggling to balance budgets:

Whitney apparently has moved the muni bond market with her predictions of default.

After ringing the bell with her report in September, Whitney went on the CBS show “60 Minutes” in December and said that cities across the U.S. will default on hundreds of billions of dollars in debt. She reaffirmed her prediction in May, at the Milken Global Conference in Los Angeles.

In the months after Whitney’s initial report, investors pulled about $4 billion from municipal-bond mutual funds, according to a report by Bloomberg.com. that cited reports by Lipper US Fund Flows.

Against this backdrop, two programs at Georgia State teamed to sponsor the Thursday seminar on the financial obligations of local and state government.

The programs are the Department of Public Management and Policy and the Fiscal Research Center. Both are part of the Andrew Young School of Policy Studies. 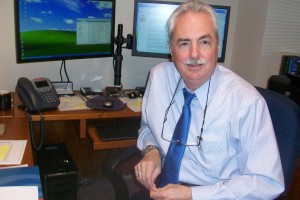 Between 50 and 60 persons showed up to hear at least a portion of the program, which was hosted by Bell.

Mitchell and Daws stayed a few minutes after the program to talk about what they learned. Adrean had to leave to attend another event.

“The take-away for me,” Mitchell said, “is that we have to be very prudent and vigilant about pension reform. The alarm should be sounded, but we shouldn’t push the panic button.

“Pushing the panic button puts us in a reaction mode, and that could put us in a bad situation,” Mitchell said.

“It is disappointing and a failure of leadership that the City Council President would choose to block reform under the false guise of needing more time,” Reed said in a statement posted on his City Hall page.

On Thursday, Mitchell met the mayor’s statement with a media release that praised a pension reform proposal Adrean has submitted to the Finance Committee.

Daws said his take-away from the seminar was need for careful consideration of any pension reform proposal.

“Don’t panic,” Daws said. “These are issues that can be dealt with, with sound strategy and good planning. They can be done in a diligent manner.”