For Handel, ‘all hands on deck’ means just that

In this business, every day’s inbox is loaded with entreaties from politicians of every stripe, under subject lines designed to get contributors to reach for their checkbooks. Most of these go straight to the trash bin without a glance, but not when the politician is Karen Handel and the subject line is “Donald Trump.”

Handel has expressed her gratitude for the president’s support after ending up in a runoff with Democrat John Ossoff for the 6th District congressional seat formerly held by Secretary of Health and Human Services Tom Price. But she has walked a careful line, as a close reading of her email attests.

“I wanted to make sure you saw this tweet from Donald Trump: ‘Dems failed in Kansas and are now failing in Georgia. Great job Karen Handel! It is now Hollywood vs. Georgia on June 20th.’

“I’ve been saying it for weeks, and now President Trump agrees: The Democrats are putting everything they have into defeating me.

“Make no mistake — this is an all-hands-on-deck situation.

“That’s why I’m excited to announce that a group of generous … etc.”

It took no great insight to predict before last week’s general primary that Ossoff’s prospects had been so oversold that anything short of an outright victory would be treated as a disappointment. Trump’s tweet confirms that. The short-selling of Ossoff’s runoff chances after last week’s vote seems equally mistaken. 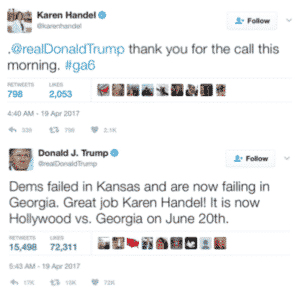 The conventional wisdom, which we’ve heard a lot of, is that in a heavily Republican district, Handel’s biggest hurdle was getting into the runoff, and she’ll get enough Republican votes to carry her easily over the top. That has happened before, but not always, or a Democrat wouldn’t be governor of Louisiana.

Just by the numbers, Handel faces a challenge. Ossoff got 92,390 votes. If Handel got all her votes plus every vote cast for the top three Republicans behind her — Bob Gray, Dan Moody and Judson Hill — she’d have 92,590 votes.

Make no mistake — that is an all-hands-on-deck situation. The chemistry and the numbers change in a runoff, but Handel’s margin for error is a lot tighter than is being generally estimated.

This race has received a lot of national attention as a straight-on referendum on Trump, and that story line will be underscored by the president’s visit to Atlanta Friday to address the National Rifle Association.

But voters are a little more complicated than that. It’s interesting that in Price’s district, one of Ossoff’s closer ads last week was about preserving the Affordable Care Act. If a Democrat can run on that issue in this district, it has legs.

The Trump effect on everything in politics has been so great that at times it’s worth stepping back to consider what would have been there, with or without Trump. Suppose that in some alternate universe, Ted Cruz had been elected president and the Republicans had proved equally incapable — there’s nothing too Twilight Zone about this — of repealing and replacing ObamaCare?

A lot of 6th District voters have problems with Trump that go beyond one issue or another. But it’s not hard to imagine that in that parallel universe, we’d have a race much like this one. This isn’t just a speculative point when it comes to the dangers ahead for Republicans in 2018. They risk as much thinking Trump is their only problem as they do thinking he’s their only salvation.

The White House said Monday it may be weeks before it hammers out a reworked health care plan with Republican congressional leaders, dampening speculation the administration would try some kind of Hail Mary pass in Trump’s first 100 days. That still is within the window of the 6th District runoff campaign. If this is a referendum on Trump in general, at a somewhat deeper level it may be an early referendum on health care reform, by which he and the Congressional Republicans are joined at the hip.