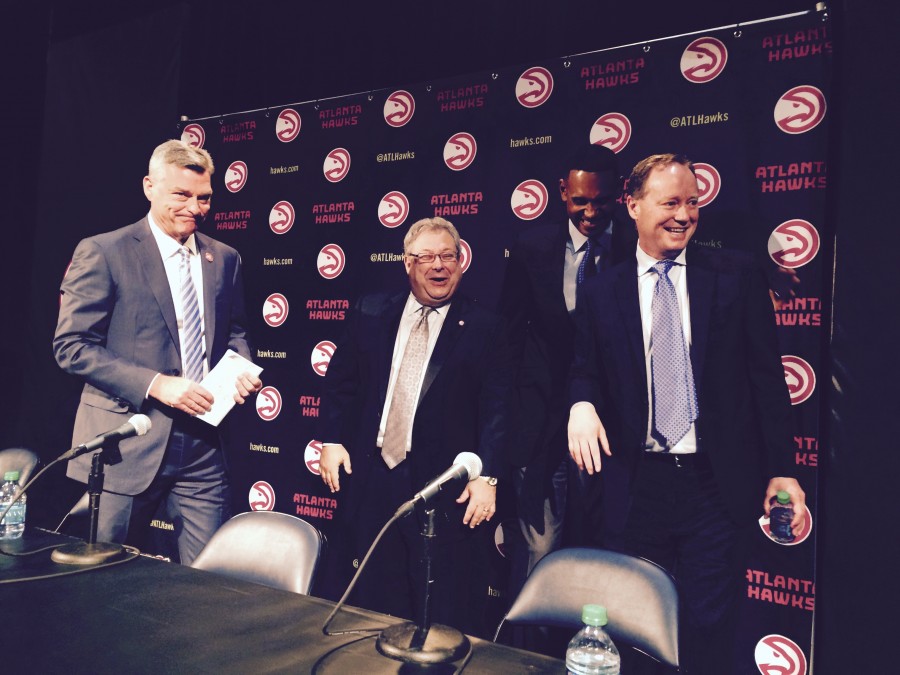 A jubilant mood filled the room as the new owners of the Atlanta Hawks met with the local media for the first time on Thursday.

“That was my first press conference ever,” Tony Ressler, the principal owner of the team, admitted after it was over.

It also was the first time that Atlantans were able to get an up close and personal look of the man who will own perhaps the city’s most beloved sports team in 2015. 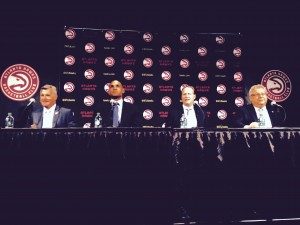 But Ressler, who is from Los Angeles, stopped short of making a permanent and definitive commitment to Atlanta – refusing to say he would keep the team in the city “forever and forever” – a concern that several observers made after the press conference.

It is a sensitive issue for a city that has lost its professional hockey team to Canada and is losing its baseball team to Cobb County.

The future of the Atlanta Hawks undoubtedly will be up to Ressler, who acknowledged during the press conference that he owns about half of the team – and that there are about 15 owners who have pieces of the franchise. The price tag of the team is estimated to be nearly $800 million before accounting for the existing debt.

The new ownership group bought the team from the Atlanta Spirit, an entity that has owned the team for the 11 years and had to survive several shifts in ownership and legal battles as well as personality clashes.

“The good news is that all of our investors and partners have an appreciation…that we will be speaking with one voice,” Ressler said.

Although that voice undoubtedly will be Ressler’s, he made it clear that he would be working collaboratively with the other owners. And there are several Atlanta owners who are part of the new group.

Michael Gearon Sr., Michael Gearon Jr., Rutherford Seydel and Beau Turner own 1 percent of the team. Marquis Jet co-founder Jesse Itzler and his wife, Sara Blakely (founder of Spanx), are thought to own about 4 percent.

Other Atlanta owners with ownership shares in the single digits are Mitesh Shah of Noble Investment Group; Robert Sheft a managing director of the Roark Capital Group; and Jim Chambers, who is related to Anne Cox Chambers, an owner of Cox Enterprises. 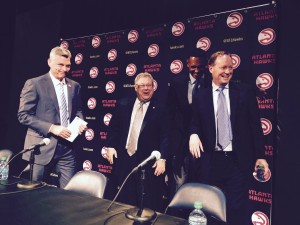 Despite the number of Atlanta owners, it is thought that when all their shares are combined , they likely would own an estimated one-tenth of the team. That ownership stake would not be enough to stop Ressler from moving the team to another city, if he were so inclined.

The second largest ownership group of the Atlanta Hawks is Steven Price and Bob Goodman, two businessmen from New York who became owners of the team about a year ago. Their ownership share is about 10 percent.

Other owners include Rick Schnall, a partner with Clayton Dubilier & Rice LLC; and former NBA player Grant Hill, who is one of the high profile owners of the team serving as its vice chairman. He is thought to own about 2 percent of the team.

When talking about Atlanta, Hill was quite bullish about the city.

“This team belongs to this community, to its fan base,” said Hill, who added that he couldn’t sleep the night before because he was so excited. “I have had an interesting relationship with Atlanta for many years. We are fired up.”

Ressler did try to assure people from Atlanta when he said that he and his actress wife, Jami Gertz, had bought a house in town.

Gertz later said the house was in Buckhead where she would be close to restaurants, shops and MARTA. Because one of their sons is still in high school, she said they wanted him to be able to graduate with his friends before being able to move the family to Atlanta.

And Ressler did say he has business interests in Atlanta, an office here, and he understands that it is the gateway to the Southeast market.

“We know this is a spectacular market,” he said. “This is a booming marketplace, truly.” 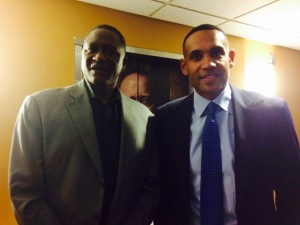 Both Ressler and Hill said they would rely on Coach Mike Budenholzer and Steve Koonin, CEO of the Atlanta Hawks and Philips Arena, to guide them in getting a better handle on the Atlanta market.

One issue concerns the future of Philips Arena – what kind of improvements might be needed or if there is a possibility that the team would want a new facility.

Koonin responded by simply saying: “Philips Arena is in the epicenter of what’s happening in Atlanta.

Hill, who has not yet found a place to live in Atlanta, said that he and his wife considered moving here last year – long before he knew he would have an opportunity to buy into the franchise.

He gave a couple of shout-outs to folks in town – Morehouse College President John Wilson, who has made him an honorary Morehouse Man; and former Atlanta Mayor Andrew Young.

“His mother and my grandmother were best friends,” Hill said of Young. “He is like family.” Hill also remembered coming to Atlanta and playing against the Hawks – including Dominique Wilkens. He remembered how tough it was to play against him, which was music to Wilkens’ ears.

Ressler also has ties to Atlanta that date back more than 20 years.

“In the early 1990s, I actually purchased the Hanna-Barbera library (from Turner Broadcasting System),” Ressler said. “Ted Turner taught me early on the value of having a vision. I’m a really big fan.”

Although he was participating in his first press conference, Ressler seemed quite at ease in his new role. He had been the owner of an NBA franchise for only 24 hours- something he said he had wanted since before he could afford a pair of sneakers.

As a journalist, it wasn’t absolutely clear to me that he had envisioned the team would be in Atlanta.

But one person who was all smiles was Dominique Wilkens.

“This is the right ownership group for Atlanta,” Wilkens said. “I’m very happy. Tony is a great guy.”