Manatees on the move in Georgia as researchers track their health, environment 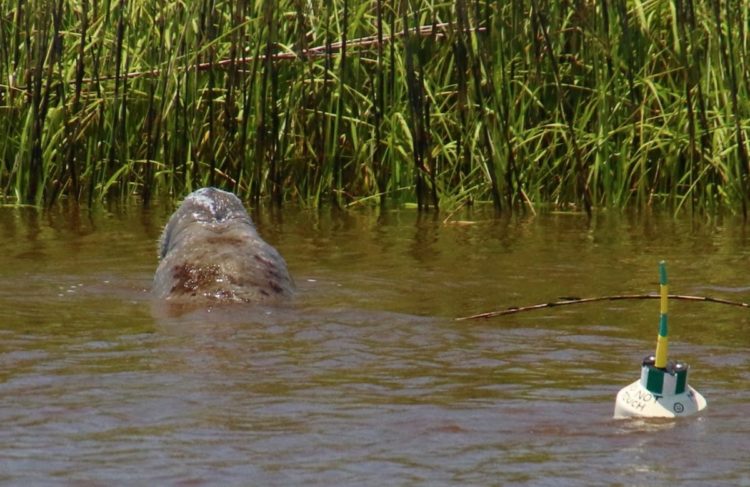 A team of scientists who are studying migratory patterns of manatees are among those gathered along Georgia’s coast as Memorial Day marks the unofficial start of summer.

Early findings show two of five tagged manatees are swimming in waters north of Brunswick. Two others are hanging out in Camden County. One has turned south, heading to warmer waters in Florida.

Wildlife agencies and organizations from Georgia and Florida attached GPS devices to five male manatees earlier this month, on May 2 and May 3, and returned them to Cumberland Sound.

The job now is to track the hefty creatures, known as sea cows, as they traverse the coastline. Special attention is being paid to the area around Kings Bay submarine base, south of Brunswick. Routine visual inspections are planned, as well.

“At least every two weeks, we’ll get eyes on each animal to see what they are doing, check the equipment and take the opportunity to photo ID other animals they might be with,” Monica Ross, a behavioral scientist with Sarasota-based Sea to Shore Alliance, one of the project’s leaders, said in statement released by the Georgia Department of Natural Resources.

“If at any point the tag activity is abnormal, we will get eyes on the animals immediately,” said Ross, who is to monitor the GPS broadcasts every day.

Manatees were captured with nets, according to the catch-and-release process outlined in DNR’s statement: 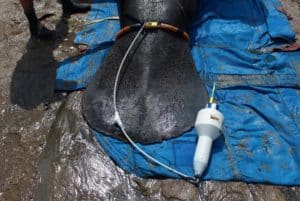 Researchers say the GPS and the belt it’s attached to will not impede the manatee’s movement or risk entanglement. Credit: Sea to Shore Alliance under USFWS Permit MA37808A-0

Health assessment studies are being directed by the Georgia Aquarium. The studies are patterned after the aquarium’s research on bottlenose dolphin in Florida’s Indian River Lagoon, said Gregory Bossart, the aquarium’s senior vice president and chief veterinary officer.

“We are starting to generate important first-time health data from manatees in Georgia,” Bossart said. “This information tells us not only about manatee health but also provides important new clues about the health of the environment and potentially human health.” 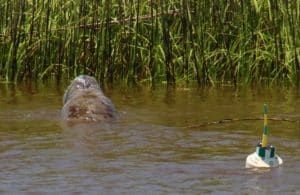 Manatees have been classified as endangered, largely because of hunting, according to nationalgeographic.com. Though now protected by laws, they remain at risk from being hit by boats and getting caught in fishnets.

The manatees seems to occur only in warm water areas of the Atlantic Ocean. Three species are distinguished mainly by their location – one group ranges from Florida to Brazil; another along the Amazon River; and the third traverses the west coast of Africa, according to nationalgeorgraphic.com.

This is the second year manatees have been tagged in Georgia. Surprising results have already been recorded, due to the pin-point accuracy of the GPS data. 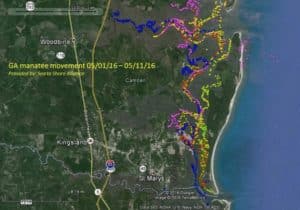 The five manatees tagged this year in Georgia have covered a range so broad that it surprised researchers. Credit: Sea to Shore Alliance under USFWS Permit MA37808A-0

Manatees have been found in small creeks in Georgia. They traverse the Intracoastal Waterway, the navigable inland corridor that stretches along the east coast, from New Jersey to Key West. Another segment covers portions of the coast along the Gulf of Mexico.

The project is funded by the commander of the Navy Region Southeast; U.S. Fish and Wildlife Service; Georgia Aquarium; Georgia Nongame Wildlife Conservation Fund; The Environmental Resources Network, or TERN (friends group of DNR’s Nongame Conservation Section); and, Sea to Shore Alliance, according to DNR.

Keep up with the project at DNR’s photo stream: