As reactions from the announcement of the Atlanta Medical Center (AMC) closing continue to pour in, one person says that shock should not be one of them.

The hospital has been a lifesaving staple in the Historic Old Fourth Ward area since before WellStar acquired it in 2016. The challenges that led to the decision for its closure including a decrease in revenue, an increase in supply costs, inflation and the pandemic contributed to a $107 million deficit. Leadership attempted to save the medical center by closing its East Point location before making the final decision to close AMC.

Greene served on the board for over seven years but noticed the decline in the quality of service, which resulted in the loss of health equity to the Old Fourth Ward.

“Health equity is an opportunity for every individual to achieve their full health potential. It is also reflected with differences around life expectancy and the quality of life and other healthcare outcomes for which we see a lot of disparities but a key component of health equity is access to health services,” Greene said.

Greene resigned from his board position last year. He said his concerns were not being heard by leadership and his opinions were no longer valued or respected. This is not the first time he has voiced his opinion on this matter. 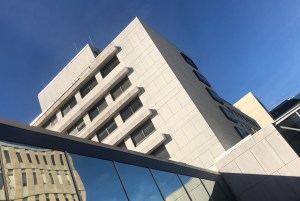 “The Southside of Atlanta is experiencing significant economic development activity with a strong focus and successful track record of creating jobs and investment,” Greene said to Georgia Health News in 2021. “To sustain these opportunities, the companies and families in these communities deserve and need a strong health care provider partner that is focused on how it can itself be positioned as an important asset in the area’s economic renaissance.”

Now that WellStar is closing, the city will only have one Level 1 trauma center — Grady hospital. This jeopardizes the health and safety of Atlanta residents and creates greater health disparities between lower-income residents and those with better access to health care, especially for minority residents.

Unlike Greene, Mayor Andre Dickens said in a letter to the healthcare system that he was blindsided by their decision to close the hospital.

“The closure will leave an open wound in the heart of this community with no articulated plans for its conversion or transition once the hospital ceases operations,” Dickens wrote.

With the closing of AMC happening in a predominantly minority community, Greene wonders if the lacking operational excellence that he saw at the hospital could be found in other health centers in the metro area.

“I think we know that in a suburban hospital environment, a strategy would have been in place or there would have been stronger leadership where the focus would have been on execution,” Greene said. “I don’t want to suggest that WellStar is a place of promoting racism, but that the lack of intentionality that was exhibited in this situation versus what you might exhibit and your other hospitals.”

Greene is excited that local officials are understainding the possible consequences of the closure. He also hopes it results in a healthcare partner with experience revitalizing urban hospitals.

“I would like for an established provider to come in. One that has a history and track record of rehabilitating financially challenged hospitals in communities that serve Black and Brown populations,” Greene said.

Dickens’ letter requests to meet with WellStar on Sept. 16. No word on if the meeting has been confirmed.

Intuit + Mailchimp pledge to continue its support of the Atlanta community