Ambitious women in business are often advised to learn to play golf, for greater success in law, banking and such careers. Julia Forbes used her lifelong passion for the sport to move up in the museum world, by curating the new exhibit at Atlanta’s High Museum, “The Art of Golf.” 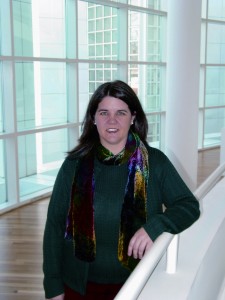 Her story illustrates how speaking multiple languages can position anyone to uniquely shine. In the case of Forbes, she spoke art and golf.

Her entire exhibit, from Dutch masters to New Yorker cartoons, depended on communication skills, passion and building trust – all of which started for her as a girl on the golf course.

“My interest and understanding of the game of golf, its history, and its ‘stars’ was very important to the development of the exhibition,” said Forbes, who was grounded enough to shepherd golf icon Jack Nicklaus through a video shoot.

“Many of the people [collectors, museum professionals, etc.] I dealt with to secure the loans for the exhibition are passionate about golf. So being able to speak that language with similar passion and understanding added great credibility to my requests on behalf of the museum.”

Negotiation had not been her strength or necessity as a museum storyteller. Materials such as the labels on the walls, the guided audio tours, and the recent ArtClix app  passed through her critical eye as the High’s Shannon Landing Amos Head of Museum Interpretation. Forbes made sure the message and language fit the High audiences.

To use a golf metaphor, she was more caddie than player – an important support to the enterprise, but not the lead role. That belonged to the curators, whose vision and negotiation skills assembled the artwork.

At 47, she might have stayed put if not for “The Art of Golf” and Michael E. Shapiro, the High’s Nancy and Holcombe T. Green, Jr., Director, who saw the potential of marketing this niche in a state that hosts the Masters each spring. If the High was going to pull off an exhibit this distinct, the museum needed a curator to match. 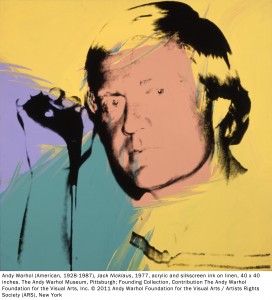 Forbes grew up playing in public courses with her father and grandparents around Washington D.C. “Part of what I love about golf is that it is a family game that you can do together,” she said.

“It’s a game that makes you feel like you have control over it, because you have some strokes of genius – just one or two – that make you think you might just be good at it. Golf is about the hope and promise. It’s so complex. That mental part is so appealing.”

The invitation to curate her first show was like a chance to play Augusta National. You don’t say no, because when might it happen again?

Forbes set off on a quest across the United States and Europe for what Shapiro called “rare and sometimes whimsical works ― some that have never been on public display ― into an artistic narrative exploring the history of the sport.”

To achieve that, Shapiro basically told her: Tee it up, swing away and call if you need a ruling.

The challenge was finding what she needed. No one had ever collected art of golf, and her detective work took her to museums, private clubhouses, golf associations and secluded homes. She recalled tracking one major piece of Victorian-era golf art to a private club in New York: “I had to go down a strange street, and there might have been a secret knock involved.”

In the States, she stumbled onto a panoramic series of golf landscapes by photographer John Yang, using a Cirkut No. 10 camera. “Like Chinese scroll paintings,” she said. Discovering a gem was only the first step; she had to draw upon her communication skills and passion for golf secure the artwork’s loan. 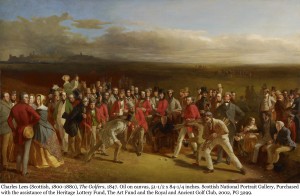 "The Golfers," on loan from the Scottish National Portrait Gallery, is considered the most famous golf painting in the world

“Look at the amazing photographs taken by Harold Edgerton,” she said of the portfolio of this pioneer in high-speed photography — a jewel unearthed at the U.S. Golf Association in New Jersey.

“He chose Bobby Jones’s swing as his subject, as it was considered to be almost perfect, and in his photographs, I believe Edgerton has captured that perfection and its aesthetic beauty.”

In all, the exhibit covers about 90 works from artists as diverse as Rembrandt, Charles Lees, Norman Rockwell and Andy Warhol. It touches on the game’s origins, its foundation in Scotland and its growth in America in the 20th century. After closing June 24, it will tour other cities that have yet to be announced.

As Forbes sought out golf art of all kinds, at her side was a consultant with her own niche: golf history. Catherine Lewis is the executive director of museums, archives and rare books at Kennesaw State, author of nine books and is one of the foremost authorities on famed Atlanta golfer Bobby Jones. Though she has far more experience than Forbes in curating and golf, Forbes trained Lewis’ eye to the standard set by the High. You could say Forbes gave a museum lesson to a more veteran pro.

“Julia reined me in,” Lewis said with admiration. “We looked at 200 pieces and rejected many that were not museum quality. It was very much a puzzle.”

Forbes’ achievement with “Art of Golf” is also notable, Lewis pointed out, because she negotiated successfully in a universe of wealth and power that remains dominated by men and infused by stereotypes.

“When I go to lectures, people still ask me if I’m Dr. Lewis’ secretary,” Lewis said. “And when I open my mouth and they can tell that I know something about golf, they ask me if I’m married. I’ve had so many marriage proposals in this line of work.”

Forbes faced down another given in both art and golf: criticism. Both are creative works that are held up to a spotlight, and require a thick skin. “This show belongs in a golf museum, not an art museum,” wrote Catherine Fox for accessatlanta.com. “It’s a shame to waste time, money and real estate on such a flimsy curatorial premise.” 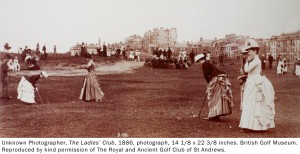 Forbes’ response can be seen, surprisingly, in her merry appearance within the exhibition.  In the exhibition’s highest floor, in a film projected on a large wall, she is the unidentified woman swinging from a sand trap and making other shots on some of the world’s most famous golf courses. The film aims to show the passion of regular golfers, and Forbes qualifies (“a good day for me is shooting 116.”) Seeing Forbes out there swinging, smiling in her element,  speaking the language of pure enjoyment.

“The videographer said, ‘This is boring.  We need some people,’” she said. “I got an old 5-iron at a thrift store and had a lot of fun.”

Exposing her golf flaws on camera was part of meeting the challenge that made Forbes a curator, and her passion frames the “The Art of Golf.”