The best thing about “Hillbilly Elegy” is its title.

As a book, it was of some interest, examining the dead-end existence that defines the South most of us don’t think about much. 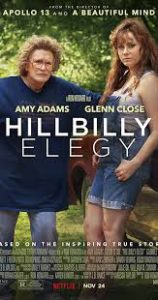 Not the South of moonlight and magnolias or Civil Rights and the Civil War, but the ragged end of the South, more dirt-poor than debutantes. If you saw “Winter’s Bone,” the movie that introduced us to Jennifer Lawrence pre-“Hunger Games,” you know the territory. If you saw “Winter’s Bone,” you also know just how clichéd and inept “Hillbilly Elegy” is.

Ron Howard, who apparently learned nothing during his days as Opie on “The Andy Griffith Show,” has given us a flavorless film with only the thinnest veneer of regional insight. It could just as well be called “A Tree Grows South of Brooklyn.”

Screenwriter Vanessa Taylor, whose script for “The Shape of Water” was hardly that picture’s strong point, has extracted a family melodrama from J.D. Vance’s book. Our protagonist, J.D. (Gabriel Basso), is a smart cookie trying to deal with his half-baked family – most especially his true-gritty grandmother, Mamaw (Glenn Close), and his loving but erratic mom, Bev (Amy Adams).  J.D. has made it as far as Yale Law School, but now he faces the final hurdle of interviewing for that all-important first clerkship.

For a boy from Appalachia, this means being presentable enough to know which fork to use at a fancy dinner. Of course, he could probably just fast-forward to that scene in “Pretty Woman,” but luckily, he has a smart, gorgeous girlfriend (Frieda Pinto) who can talk him through it. But she can’t talk him through what to do when he receives a mid-meal phone call that his mom is back in the hospital, having almost OD’d. 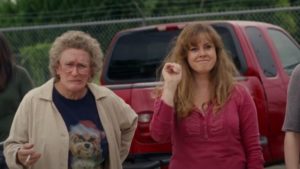 A scene from “Hillbilly Elegy”

“Hillbilly Elegy” bounces back and forth between the grown-up J.D.’s travails and those of his young teen self in the late ‘90s.  It’s a tired, distracting device that drains us of whatever empathy we might’ve felt for J.D. at any age. And some scenes are just pure junk – like Bev getting high on painkillers and roller-skating through the hospital where she works as a nurse.

In one of her earliest films, “Junebug,” Adams showed us she could do True-South like nobody’s business. But there’s nothing here for her to act. Just stuff to over-act.  And yes, Close looks amazing – from the mountain-momma jut of her jaw to her favorite Dollar Store t-shirt. But it’s an impersonation at best – like Mammy Yokum in a high school production of the ‘50s musical, “L’il Abner” (OK, Boomer…. I know). Then again, like Adams, given what she’s been given by the script, you want to applaud her just for showing up.

That doesn’t mean you have to show up. Or tune in. Or whatever we’re doing in these plague years.

“Hillbilly Elegy” is available for viewing on Netflix.