Is it a park? Is it a drainage basin?

This Historic Fourth Ward Park is taking shape south of North Avenue just west of the Beltline — one of the most incredible green projects in Atlanta’s history.

Here is a beacon of hope — we can invest infrastructure dollars — in this case water and sewer funds — into parks with water features for the public to enjoy.

If only we had had this wisdom 10 years and $4 billion ago when the city was under the gun to improve its century-old combined water and sewer system.

Environmentalists at the time — led by activist Bill Eisenhauer — urged the city to explore green solutions to meet the requirements of the federal consent decree. 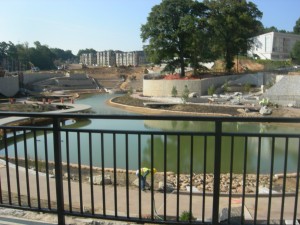 The city dismissed that approach, saying it would take too long and that it was too experimental. (Since then, the city has asked for a 15-year extension to meet that decree).

So in the past decade, billions of dollars have been buried in an underground network of tunnels — hidden from public view and not contributing to our quality of life.

But there was one signature exception — Historic Fourth Ward Park.

“To think we almost had another $40 million tunnel here,” said Angel Poventud, a citizen activist who has worked tireless on the Beltline, during a tour of the park this past Saturday. 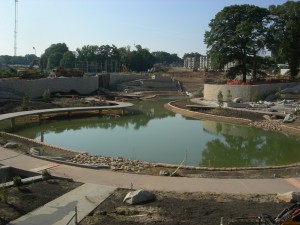 Instead, the city has saved more than $15 million on a green, enjoyable solution to one of its toughest water sewer problems. And the city will win on the backend. It has created an amenity that is contributing to vibrant development in the area.

The park will create stronger neighborhoods with higher property values — a far cry from the acres and acres of surface parking lots that contributed to the flooding of City Hall East. (By the way, the city could not have sold City Hall East without addressing that problem).

Poventud explained that the Historic Fourth Ward serves as a drainage basin for a 985-acre area of Atlanta. Water flows down from a host of neighborhoods in the northeast quadrant of the city converging into this basin. 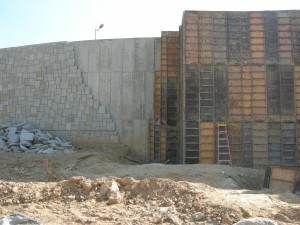 Kevin Burke, project manager of intricate construction of Historic Fourth Ward Park, said the first phase is a five-acre parcel with a two-acre pond. At full pool, the pond will hold nine million gallons of water.

Burke said that because the pond is part of the ground water table, it will always store water. 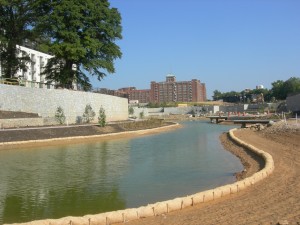 “We will be able to tap into that water for irrigation of this park,” Burke said. “We also will have a floating fountain to circulate the water.”

The first phase of the five-acre park will be open to the public by the end of the year while some finishing touches are made. A grand opening of the 12-acre park should occur in the spring.

The public will see all sorts of features — artistic granite outcroppings, a 350-seat natural amphitheater area, pedestrian walkways and landscaping that will require minimal maintenance. 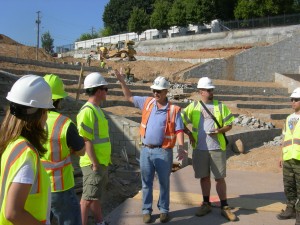 “This is one of the coolest projects I’ve ever worked on in 20 years,” said Burke, who also worked on Boston’s Big Dig project and is now working for Atlanta Beltline Inc. He looks forward to when the park is complete and when the Northeast segment of the Beltline trail will open at the end of next year.

The total cost of what eventually will be a 17-acre park is about $52 million. The portion being paid for by the City’s Department of Watershed Management is $25 million (instead of $40 million). 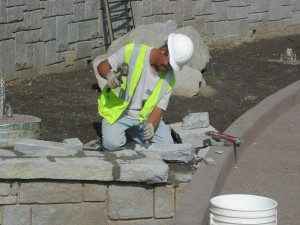 The City also will get some other benefits. The parcel of land between the pond and City Hall East we be available for festivals. An 18-foot main walkway is being planned for the large crowds that the space could hold. 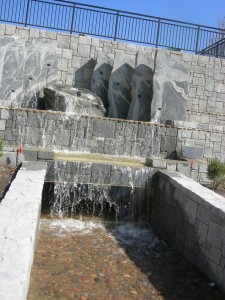 Poventud said this project is not only significant for Atlanta but for the nation as a whole. It can serve as a precedence of what can be done to improve our infrastructure while contributing to the quality of life in our cities.

“We could have done this all over the city,” Poventud said. “Imagine if we had 10 of these.”

Well, maybe we still can.

In the last couple of days of the past legislative session, the City was authorized to go back to voters for the final, four-year extension of the water-sewer sales tax (Municipal Option Sales Tax).

If we invest those dollars wisely, we can transform this city — where we can solve our storm water problems by investing in parks and green space.

Historic Fourth Ward Park proves it can be done. 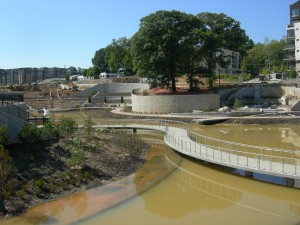