A railroad bridge over Ormewood Avenue and a reconstructed 1800s farm at the Atlanta History Center have been nominated as official landmarks as the City continues to expand its definition of “historic.” 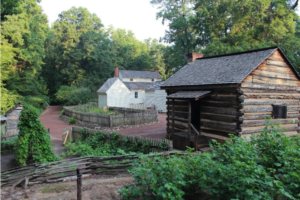 Part of the Smith Farm at the Atlanta History Center as seen in the landmarking report.

The landmark nominations of the Ormewood Avenue Bridge and the Smith Farm were approved enthusiastically by the Atlanta Urban Design Commission at an Aug. 25 meeting. Next up is a Zoning Review Board hearing, and if they move ahead, a City Council decision on the designation, which would afford various historic protections.

Both are first-of-their-kind nominations in Atlanta, where preservation has traditionally focused on individual buildings. Landmarking a piece of railroad infrastructure and a farm that was relocated and reconstructed for educational purposes are new territory. It’s part of the City’s deliberate effort to expand the focus of historic preservation sites. Other recent landmark nominations in that vein include the legendary Midtown gay bar the Atlanta Eagle; the Fuller-Freedom House in the Old Fourth Ward, which served as an organizing refuge for members of the Student Nonviolent Coordinating Committee during the Civil Rights movement; and the Capitol View Masonic Lodge, which doubled as an office for a union founded by Black federal workers to combat racial discrimination.

The railroad bridge over Ormewood Avenue in Southeast Atlanta is a concrete arch about 40 feet high dating to 1899-1900. It’s a traditional gateway between the neighborhoods of Grant Park and Ormewood Park, and is now part of the Atlanta BeltLine trail and transit corridor. 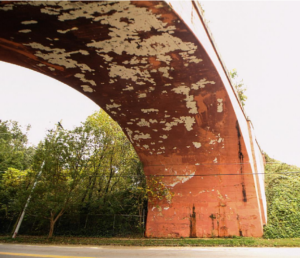 The arch of the Ormewood Avenue Bridge as seen in the City landmarking report.

Doug Young, director of the City’s Historic Preservation Studio, presented the nomination to the UDC. He called the Romanesque Revival structure “an exceptionally unique design and style… and very early example of cast-in-place concrete railroad bridges” in Atlanta and probably in Georgia. It would be the “first piece of pure infrastructure” protected with landmarking in Atlanta, he said.

“The Ormewood Avenue Bridge dominates the street scene as the gateway, boundary, and as a connector between the historic residential neighborhoods of Ormewood Park to the east and Grant Park to the west,” said David Yoakley Mitchell, executive director of the Atlanta Preservation Center, in an email immediately after the UDC vote. “…This will be the first structure like this in the city and create diversity in the catalogue of our landmark sites.”

The APC worked with local neighborhood associations, elected officials, Atlanta BeltLine Inc. and Neighborhood Planning Unit W on the landmarking proposal. Mitchell told the UDC that the effort is a “zenith example of using a symbol like a bridge to show all the unity that exists” in the neighborhoods.

“It’s a beautiful thing to see communities coming together to protect a piece of history…,” said UDC chair Desmond Johnson in support of the nomination resolution. UDC member Robert Reed praised it as an example of “thinking creatively about our landmarks” and said he hopes it inspires similar efforts.

The Smith Farm, located on the Atlanta History Center’s Buckhead campus at 130 West Paces Ferry Road, is a reconstruction of a pre-Civil War farm, where costumed actors help to educate visitors about the lives of farmers and enslaved people. 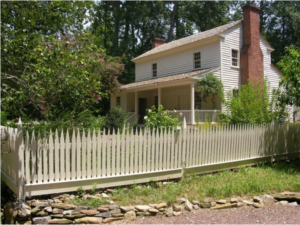 The Tullie Smith House at the Atlanta History Center’s Smith Farm, as seen in the landmarking report.

It includes the circa 1845 Tullie Smith House, which was moved and partly reconstructed from North Druid Hills Road in DeKalb County in 1969, and an “enslaved people’s cabin” dating to around 1850 that was moved from Cliftondale in South Fulton, along with various outbuildings.

The relocation, reconstruction and subsequent alterations remove the classic standards for historic designations, in contrast to the center’s existing landmarked structure, the Swan House mansion. But the farm is already on the National Register of Historic Places, and Young told the UDC is has meaning all its own after roughly 50 years as a component of the center.

“What makes this property unique is both the history of the buildings themselves and the fact that it’s acquired its own significance since the buildings have been moved and assembled on the site, because part of the significance is as an educational function in the city of Atlanta,” he said. 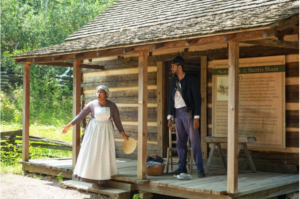 Costumed actors educate visitors at the Smith Farm’s enslaved people’s cabin, in a photo from the landmarking report.

The nomination is “unusual and it’s the first of its kind,” said Young, calling it part of the “expansion of what is considered landmark- and historic [designation]-qualifying.”

“We sought the designation to showcase the historic nature of the property,” said Claire Haley, the center’s vice president of public relations and programs, in an email prior to the UDC vote. “The farm accurately represents a working slaveholding farm of the Atlanta area in the 1860s with historic buildings moved to Atlanta History Center for preservation and interpretation. The property provides a cornerstone of our school tour programs.”

The proposed landmarking would apply to the house, the cabin, a dairy, a corn crib, a barn, a smoke house and the landscaping between them. Considered “non-contributing” as recent additions are a blacksmith’s shop, a chicken coop and a privy.