Matthew Wesly Williams is the 11th president in the school’s 60-plus-year history.

Last month, President Rev. Matthew Wesly Williams was officially celebrated as the 11th president of the Interdenominational Theological Center (ITC). At 45, he is the youngest to hold the position.

“I consider it a homecoming,” Williams said. “It’s a place that changed my life. I have a testimony that’s not unlike many other students who came for a degree and ended up with a transformation.” 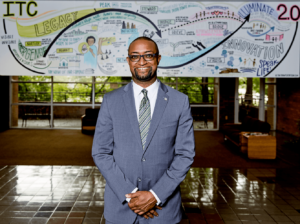 Williams, a 2004 graduate of ITC, took an interim role in July 2019. He was appointed in June of last year and has already hit the ground running, shaping the future of ITC.

The Chicago native spent 15 years at the Forum for Theological Exploration (FTE) in Decatur before accepting the position at ITC. FTE, a leadership incubator, inspires young people to make a difference in the world through Christian communities.

“I was part of the leadership team that led a transformation that kept the brand equity and shifted its identity programming and organizational model in 2014,” Williams said.

“In 1958, it was out of necessity that these five Black theological schools try to figure out a future for themselves,” Williams said, recalling the old adage that necessity is the mother of invention.

“What [the founders] did not realize at the time was that they were engaged in innovation and its model remains unique in the U.S. There is no institution that represents as wide a swath of the Black church and by extension, the Black community, like ITC,” Williams continued. 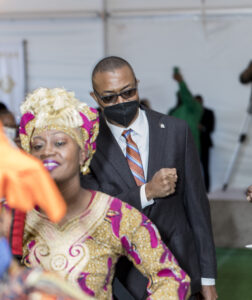 Early in its collaboration, the students played a pivotal role in Atlanta’s contribution to the Civil Rights Movement.

Maddox’s refusal led to him closing and selling the restaurant, which is now part of Georgia Tech’s campus. Sixty years later, Tech commemorated this historical moment with a memorial in the three students’ honor.

Although being in charge of your alma mater is an honor for most people, leading it during a global pandemic was not an ideal situation for Williams. 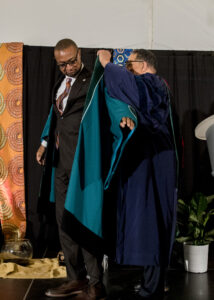 Like all colleges, universities and seminaries, ITC also had to close its doors for a virtual alternative to help prevent the spread of COVID-19 throughout the Atlanta University Center (AUC).

When asked if ITC will rejoin the Atlanta University Center Consortium, he told SaportaReport, that they continue to enjoy the collaborative relationship with the organization and wants to explore what may be even more possible going forward.

“Preparing the kind of leaders that our communities need,” Williams concluded, “if students leave ITC only knowing how to preach, teach and administer the sacraments, we failed them.”

It’s a game of 6-degrees