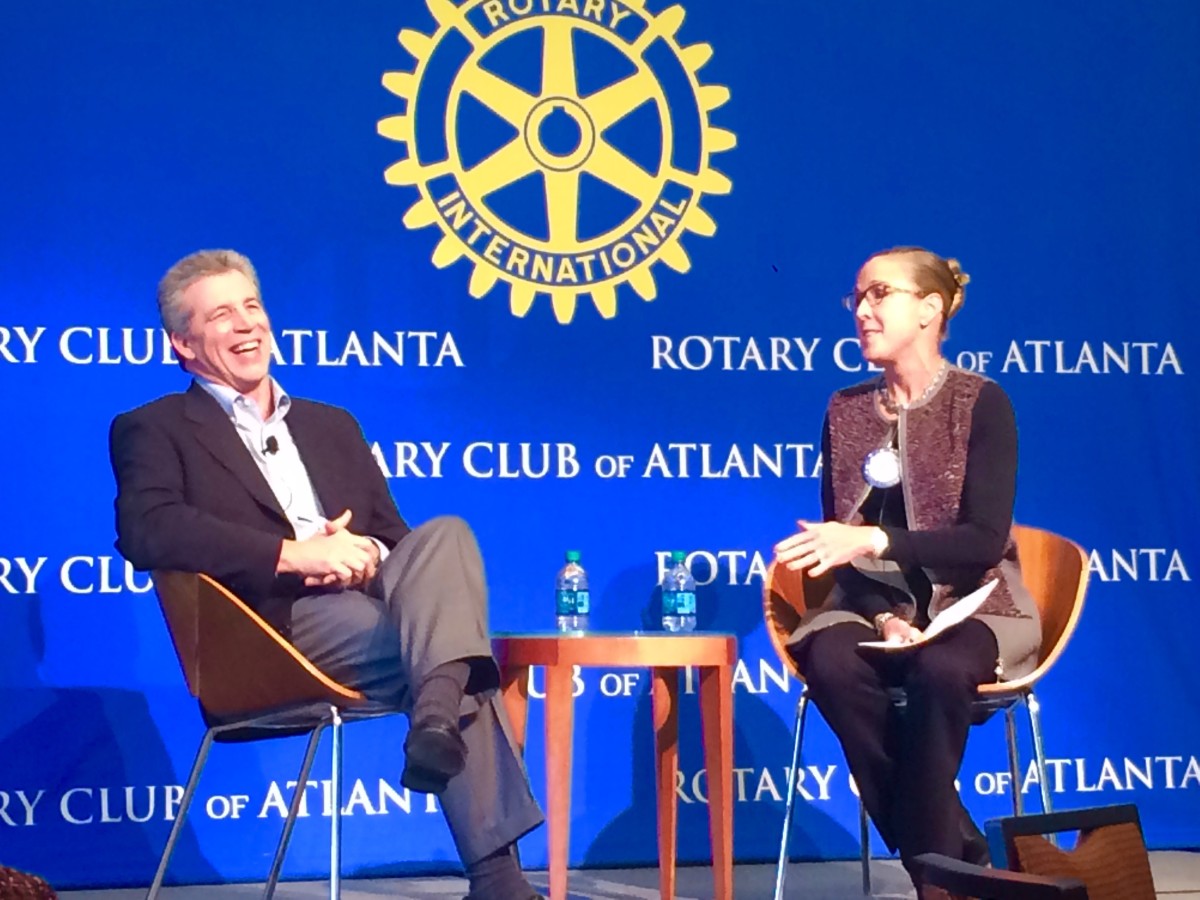 When introducing her boss at Monday’s Rotary Club of Atlanta, the Home Depot’s Kelly Barrett admitted that she was a little worried when Craig Menear became CEO following Frank Blake in November 2014.

“Craig had tremendous shoes to fill as our beloved CEO retired,” said Barrett, who is vice president of internal audit and corporate compliance for the company. “The stock was trading at an all-time high.”

But Barrett went on to say that Menear has not missed a beat. “Our stock is trading at an all-time high,” she said.

During the “fireside chat,” Menear said he grew up in Flint, Michigan – home of nine General Motors plants – and that he was one of only two members of his family to escape the automobile business. 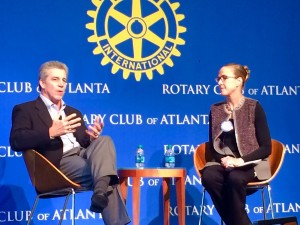 Now after 36 years in the retail industry, Menear shared a few rules to go by.

Menear, who said he is a “do-it-yourself” Home Depot executive saying his most difficult job has been redoing a bathroom, said the company has been expanding in Atlanta with a 1 million square foot distribution center in Locust Grove. it also has a technology center near its headquarters in Cobb County and an innovation center on the Georgia Tech campus.

“It’s great to be doing business in an environment like Atlanta where you have incredible talent and opportunities to work with Georgia Tech students,” Menear said.

When Barrett asked him about the home of the future, Menear said the industry is moving toward “smart homes” that will be able to make them operate more efficiently with greater securing.

As for economic trends and how they will impact Home Depot’s business, Menear was upbeat. He said the economy will continue to grow by 2 percent to 3 percent a year, home values will continue appreciate in value – perhaps to their 2006 peak and the turnover of homes is about 5 percent, higher than projections.

“That actually drives the (home) project business,” Menear said. “We are happy to see an improving housing environment and a growing economy.”

Without mentioning names, Menear said the company lost its customer focus during the early and mid 2000s. As a result, Menear said: “We lost out on the greatest housing boom.”

But under Frank Blake’s leadership, the company was able to rediscover its core values and its culture that had been set by the founders – Bernie Marcus and Arthur Blank. 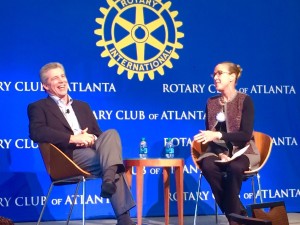 Home Depot CEO Craig Menear cracks up at a comment made by Kelly Barrett, a Home Depot vice president and Atlanta Rotarian

“We have a wonderful business,” Menear said. “The greatest gift we go from Bernie and Arthur was our culture. It is our competitive advantage. It’s really hard to copy the culture of a company.”

Central to that culture is the inverted pyramid where customers and associates are on the top rung and the executives are at the bottom tip.

Menear also talked about the company’s giving, which sifted in 2011 to focus on veterans – especially housing for people who had served the United States. Menear said the company has committed more than $105 million to that effort.

Locally, Home Depot has been working with Habitat for Humanity – Atlanta, focusing on housing for veterans and their families.

After his talk, Menear also said that the company will focus on the Westside – the neighborhoods west of the new Mercedes-Benz Stadium.

“A long term transformation needs to take place,” said Menear, who has toured the communities with Atlanta Mayor Kasim Reed and Richard Dugas, CEO of Pulte Homes and chair of the Westside Future Fund. “How do you do on the Westside what they did on the east side (East Lake)? There’s so much history on the Westside. It’s an area that needs help. It’s got to be right for the community.”

Menear said Home Depot “is just beginning to formulate” how it will contribute to the Westside, but Menear said: “We are going to do what we can to support Riechard and the Westside Future Fund.”