How Buckhead cityhood’s politics play into the Red-vs.-Blue battle of 2022

Amid all the controversy about the political question of Buckhead cityhood, it’s easy to overlook the significance of the date voters would be asked to answer it: Nov. 8, 2022.

The debate so far has swirled around hot-button issues of crime and race and the nit-picking details of dueling pro-and-con financial studies. The political forest missed by all those trees: The cityhood effort is led legislatively by non-local Republican officials, has been greeted by Buckhead residents with a wide partisan divide, and would just happen to appear on the 2022 ballot alongside the Congressional midterms and a probably epic Red-vs.-Blue battle for the Governor’s Office.

In this sense, the Buckhead City advocacy is another showy way for GOP state politicians to mess with Blue Atlanta to remind it who’s boss, a political move “that is as old as Atlanta is important,” says J. Benjamin Taylor, a political science professor at Kennesaw State University. But cityhood could be different from such classics as talk of taking over the airport, he says, as it is fraught with political uncertainty that could surprise anyone involved. 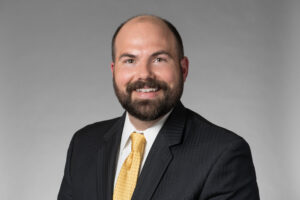 “If this issue is on the ballot in 2022, I have no doubt it’s going to be a big deal in the governor’s race. It has all the makings of the old South with political divides and economic divides and [the motto] ‘Atlanta is the city too busy to hate,’” said Taylor, an expert in voter behavior and political advocacy.

“If this [cityhood] happens, it would be a stick in the eye of the Keisha Lance Bottoms administration. For the rest of her days, she would be known as the mayor who lost Buckhead,” Taylor continued. “…That would be a huge black eye to the long-established leadership of Atlanta. And that can’t be underestimated as part of it. You want to show Atlanta they don’t have any power.”

However, he says, the political trick always has been to make Atlanta feel less important without actually making it unimportant, with it being Georgia’s economic engine and all. Threading that needle with Buckhead City could make a lot of political hands tremble.

“So it makes for a snappy campaign to say, ‘Buckhead should be its own city and we’ll show you, Atlanta!’” says Taylor. “But is there a practical side to this? I don’t know.”

Within Buckhead, both sides of the debate have downplayed the partisanship and politics. Cityhood has certainly had grassroots rumbling for years and this latest effort emerged from advocacy from local real estate agent Sam Lenaeus. The pro-cityhood Buckhead City Committee says it is nonpartisan and claims to be politically diverse, though the identity of its membership and funders remain private. (Ditto for the anti-cityhood Committee for a United Atlanta.)

But the advocacy so far has a decidedly Republican tilt. Bill White, who emerged as the BCC’s chairman and CEO, is a major fundraiser for former President Trump and was appointed to the Georgia Board of Corrections by Republican Gov. Brian Kemp. He has been featured twice on the conservative Fox News talk show Tucker Carlson Tonight to tout cityhood. The state lawmakers driving the cityhood legislation are Republicans who do not represent Buckhead or Atlanta: Rep. Todd Jones of Cumming and Sens. Brandon Beach of Alpharetta and Clay Dixon of Buford, who is also one of Kemp’s floor leaders, meaning he promotes legislation on the governor’s behalf. Beach was previously a supporter of another separatist movement: creating a “Milton County” in the northern metro suburbs to break away from Fulton County, which faded about a decade ago. On Sept. 27, the BCC announced legislative support from another 10 Republican lawmakers who also don’t represent the neighborhood.

The state lawmakers who actually represent Buckhead are all Democrats who either oppose or are taking a wait-and-see stance on cityhood, in a neighborhood where President Biden won nearly 61% of the vote. A recent BCC internal poll of Buckhead voters found about 61% in support of holding a cityhood vote, but with a huge partisan divide: around 86% of Republicans backed the vote while a 48.3% plurality of Democrats opposed it with only around 38% in support.

Within Buckhead, where neighbors have to live with neighbors and businesspeople have to cut deals with each other, few of the cityhood combatants are eager to talk about the partisan implications. One concern some — both Republicans and Democrats — have mentioned quietly is the possibility of a cityhood vote boosting 2022 turnout for the opposing party.

Taylor says that, with Buckhead’s wealthy and well-educated demographics, turnout will be high no matter what. The big political question is how the cityhood debate is localizing major, national hot-button issues of crime and “where are our tax dollars going.”

“The issue is, it’s increasingly the case that politics, even down into local races, has become increasingly nationalized,” and those politics have stark partisan divides, Taylor said. “That’s a trend that’s been 25 years in the making and it’s slowly trickled its way down to the local level.” 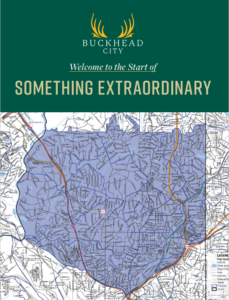 The front of a pro-cityhood mailer sent to local voters in September by the Buckhead City Committee, showing a map of the proposed city.

Another political trend is the growth of suburban voters. Appealing to those voters with stances on crime and taxes could be part of the “strategic calculation” of those non-local suburban lawmakers who are sponsoring the cityhood legislation and “trying to generate political activity in a place they don’t represent,” Taylor said.

But trying to refocus national issues at the local level is tricky, he said, and can create what politicians hate the most: uncertainty. That is reflected, Taylor said, in the most obvious oddity of the cityhood movement: “If this is a thing people from the area want, why aren’t the politicians there the ones doing it?”

“The politics of [cityhood] are very muddled because it’s difficult to know exactly how the people think about it,” said Taylor, who said accurate polling at such a hyperlocal level is challenging. The debate is also fraught with issues of income and racial divides, Taylor said, and “from an optics point of view, it certainly looks troublesome.” That could breed hesitancy among local politicians, who might be supporting cityhood behind the scenes or figuring how it affects them. The BCC has claimed that some unnamed Democratic officials are in support of cityhood but feel they must remain quiet until after the City of Atlanta’s 2021 elections.

Taylor said voters might start using the cityhood question as a factor in choosing candidates and suggested that could even change Georgia’s role in the predictability of the midterm elections, where it’s virtually a historical law that the president’s party loses seats in Congress. (It’s already affecting the 2021 municipal races as a major issue for mayoral and City Council candidates.) In those veins, it’s notable that the BCC’s poll did not ask directly about support for cityhood, just the notion of voting on it, and also asked whether a politician’s cityhood stance would sway voters’ support for them.

‘Governing is different from campaigning’

Regardless of the merits of cityhood, Taylor said, “from a political point of view, this is an excellent way to get attention.” That’s a major motivation the BCC has cited, claiming it might have been happy with some concessions from the mayor before deciding to advocate for cityhood. But if the effort is successful, that’s a whole different ball game.

“There’s always the chance for unintended consequences in something like this because it’s so high-profile,” Taylor said. “… And governing is different from campaigning.”

Cityhood could raise policy and practical challenges and surprises, he said. “Regionalism and consolidation is a trend in government, and this is the exact opposite of that,” said Taylor, adding “that doesn’t make a lot of sense” from a policy standpoint.

He also noted that leaving an existing government to create a new one is complex and that previous “secessionist movements” have been unsuccessful with Milton County and the politically similar 2018 attempt of an area called Eagle’s Landing to leave the city of Stockbridge. “In some ways, this is kind of the Milton County issue writ large,” he said.

Taylor also had a warning for cityhood’s conservative backers, with an eye on some of the political trends: “You might be careful what you wish for, because you might create a Democratic city with a big tax base.”

Whatever happens with cityhood, another impact might be the future of how metro politicians bluff each other. Loose talk about cityhood has come and gone in the neighborhood for years, and Buckhead-area City Councilmember Howard Shook is among the elected officials who say they’ve used its threat from time to time as a lever to get something done with the mayor or City Hall. Taylor says that kind of saber-rattling makes perfect political sense.

“But that’s always the danger of talking about these so-called nuclear options,” he said. “At some point, there could be someone who comes along who wants to drop the bomb.”