The major candidates for mayor took strong stances on the fate of the city jail and issued some zingers about the Buckhead cityhood movement at a July 21 forum. 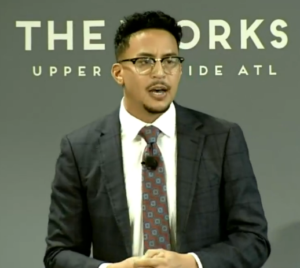 Incumbent Keisha Lance Bottoms has said she will not run again in the Nov. 2 election, bowing out after a single term that virtually all of the current candidates are blasting from virtually all directions.

The movement for the wealthy Buckhead neighborhood to separate into its own city remained a major issue and one where the candidates repeated their earlier public stances of opposition tempered with empathy for crime concerns. But this time, the subject drew some of the night’s most memorable quotes.

Moore referred to the cityhood backers’ use of divorce metaphors while warning separate cityhood would be expensive. “I’ve heard it said Buckhead wants to divorce from the City of Atlanta, and you know, with divorce comes alimony,” she said to laughter. “… As they say, it’s cheaper to keep her.”

Reed said Buckhead separatism would be devastating to Atlanta and said it motivated him to run again. He cited the slogan popularized by Civil Rights-era Mayor Ivan Allen about Atlanta being “the city too busy to hate” — a term dating to a still-debated incremental approach to desegregation variously aimed at minimizing extremist violence and protecting status quos.

Reed said officials must restore the relationship with Buckhead residents, “because they are our brothers and they are our sisters, and if Atlanta breaks apart, our reputation as a city too busy to hate breaks apart with it.”

Crime and the jail 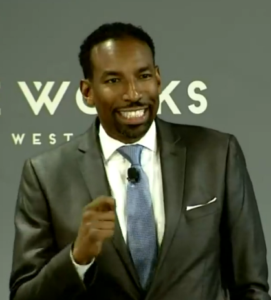 With crime still the biggest issue in the race, the candidates took clear stances on the fate of Bottoms’ controversial proposal to close the Atlanta City Detention Center and rework it into a mixed-use facility with social services. Fulton County Sheriff Patrick Labat has proposed using it to house county prisoners amid overcrowding and Bottoms herself indicated willingness to compromise in the short term.

Five of the six mayoral candidates in the forum said they would reverse course on Bottoms’ plan, with only Brown saying he would seek to close the jail. He said he was influenced by his mother’s incarceration and repeated offenses when he was a child, which he said was due to her inability to get post-imprisonment social services support like the new facility might offer. The other candidates said the jail is needed to aid Fulton’s overcrowding, avoid sending low-level offenders to other facilities, and as symbolism in a crime wave.

Brown and Dickens were put in the hot seat and pushed to affirm that they do not support “defunding the police” to their votes last year in favor of a failed proposal to withhold part of the Atlanta Police Department’s budget pending a reform proposal. The move came in the wake of the George Floyd protests and the controversial killing of Rayshard Brooks by APD officers. The City Council never defunded APD.

However, there was no direct question about the federal legal problems, actual and potential, involving two of the candidates, though the forum included many allusions to “corruption.” 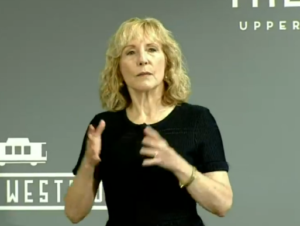 Brown is under indictment on federal fraud charges, which he says are untrue and the product of his whistleblowing on someone else’s corruption. And Reed’s previous administration is the subject of an ongoing bribery and corruption investigation that has led one official to plead guilty and seen indictments for several others; Reed himself may be under investigation, the Atlanta Journal-Constitution recently reported. Reed has said he did nothing wrong and was not aware of the other officials’ actions.

Dickens, without naming names, contrasted himself as a candidate who got on the City Council with promises of “restoring public trust and integrity… and I won because corruption is a crime… [that] tears at the fabric of our public trust.”

“So we can’t have a mayor that can fight crime in the City of Atlanta when they’re facing federal investigations,” Dickens said.

“I know there’s a cloud of corruption that’s still over City Hall that we have to get rid of,” Moore said. She said she agreed with Dickens that City contracts for such work as road improvements are still slowed down due to hesitancy and lack of bidders resulting from the bribery scandal, resulting in delays on work like road projects.

Zoning and many, many other topics

Zoning changes to allow small apartment buildings or accessory dwelling units in single-family districts was another major controversy the candidates addressed. It’s also one with an unspoken Buckhead angle, as the neighborhood has been the hot spot of opposition. 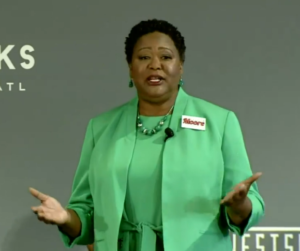 Reed was the only candidate to flatly oppose such a change, in another policy contradiction with Bottoms, his one-time protege. The other candidates said they supported the idea with various qualifications. “I’m a lawyer. I can’t give a yes or no answer,” said Gay in response to the organizers’ attempts to get the candidates to write the yes-or-no answer on a whiteboard before explaining themselves.

Gay frequently gave answers revolving around collaborations and partnerships, echoing deals she has brokered as an attorney. While sometimes speaking at a high level — she was the only candidate to use such spelling bee stumpers as “sclerotic” — Gay also had a blunt answer about the city’s contract process: “I would blow it up.” (Which still meant collaborating with experts to come up with a better system.)

Brown, who was elected to the City Council in 2019, said he had already accomplished more system changes or analyses than some of his competitors, who have served longer in government. 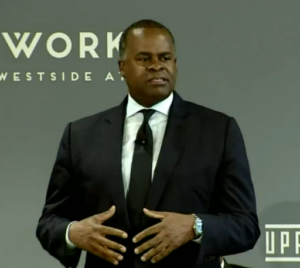 “And I’ve heard a lot of people on this stage speak about a lot of things that they will do,” he said. “The question that you have to ask yourself right now is, why hasn’t it been done yet? Why hasn’t this work been done in this great city that we love so much?”

Some other topics related to local issues in the northwest neighborhoods. The area’s rebranding as the “Upper Westside” has generated some controversy as a sign of gentrification, but was not mentioned in the forum, though a few viewers of its live-stream commented on the term with jokes or eyeroll emojis.

Many, many other topics were discussed, and many more details of candidates’ plans provided, in the forum, which can still be viewed on the Upper Westside Improvement District’s Facebook page.

While moderator Lisa Rayam of WABE referred to “all” of the candidates being present, there is an ever-growing list of other contenders who were not on the stage. As of July 21, those who have filed fundraising paperwork or announced runs included Brandon Adkins, Alex Barrella, Daniel Davenport, Rachele Fruit, Johnathan Geter, Kenneth Hill, Rebecca King, Amanda McGee, Walter Reeves, Devonta “Sully” Sullivan and Robert “Bobby” Wilkes.