How is Midtown Going to Handle All of this Growth?

One question we’re asked often is, “how is Midtown going to handle all of this growth?” It’s not a surprising question. We did the math recently and since 2000, the 1.2 square-mile ‘core’ of Midtown has seen the delivery of more than 80 major development projects. That’s a lot of change, a lot of investment and a lot of risk capital being put to work. 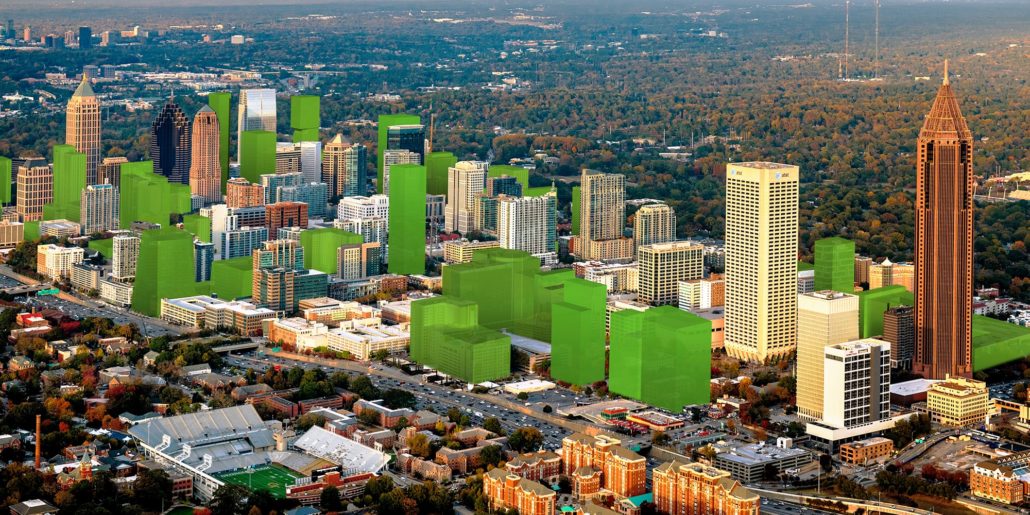 Projects in Midtown delivered since 2018, under construction or cleared the Midtown development review process. 46 total projects, 14 not shown.

In asking how Midtown will handle all this growth – the implicit question is, “how do we grow while improving the quality of people’s lives?” This is what Midtown Alliance has been committed to for the last 41+ years, and we’ve seen a lot of progress. There are many essential elements to creating a place that gets even better as it grows. Among the most visible are the buildings that get built. We’ll all be living with them for the next 50-100+ years, so it’s critical to get these right – especially where buildings connect to the street. Here’s how Midtown has approached new development over the last 20 years, and what we’ve learned in the process.

Happy People on Foot: With the adoption of the Blueprint Midtown master plan in 1998 and its associated zoning, we’ve been working to create a community that offers more convenient choices, more opportunity, more things to do and a place that is more beautiful. The foundation for this work relies on safe and convenient travel on foot. To this end, we were about walkability long before there was a Walkscore. Today, you could sum-up our economic development strategy in four words: Happy people on foot. And we’ve heard it time and again, as recently as our 2019 Midtown Community Survey: if we get the walkability right, the rest follows. 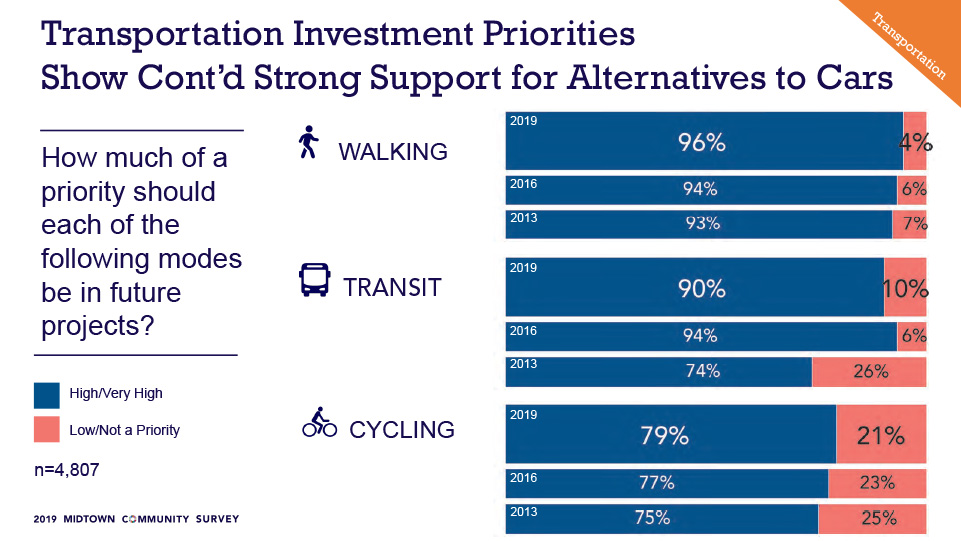 Our 2019 Midtown Community Survey garnered responses from 5K people who spend time in the district. Their feedback on transportation priorities underscores the continued importance of supporting walkability, transit and cycling.

And a major hat tip to Sally Flocks, the founder of the pedestrian advocacy group PEDS, who recently passed the baton after 24 years as its top executive. As we look proudly at the multiple “Golden Shoe” awards her organization has bestowed on Midtown, we thank Sally and team for their creative and relentless advocacy, with more to come.

Get the Zoning Right: It starts with a vision, and zoning is the source-code for what gets built.  Working with the City, nearly 1.5 square miles of Midtown became the most progressive zoning district in the city, known as a Special Public Interest (SPI) district. We’re sometimes asked, “with all this density, aren’t concerned citizens showing up in matching ‘NIMBY’ shirts at each of these zoning hearings?” The short answer is no. Some reasons are physical, with Midtown’s street grid and strong transit service that provide more choices for travel to balance land use.

In Midtown, the density and scale of new development is established at a district-level, with more density near MARTA stations, bonuses for things like buried parking and utilities, street-level retail and affordable housing. Since Midtown’s zoning does not attempt to mandate or control “use,” specific parcels are not designated specifically for “office” here, “residential” there. Instead, everything is zoned “mixed use” because this results in the kind of fine-grained development pattern that works. Planners call it “urban fabric,” and it’s critical for a walkable urban place. Buildings need to connect with, and add value to the public realm. So buildings are required to pull up to the sidewalks rather than being set back from the street, with active uses at the street level with windows, because nobody feels inspired walking by a blank wall. 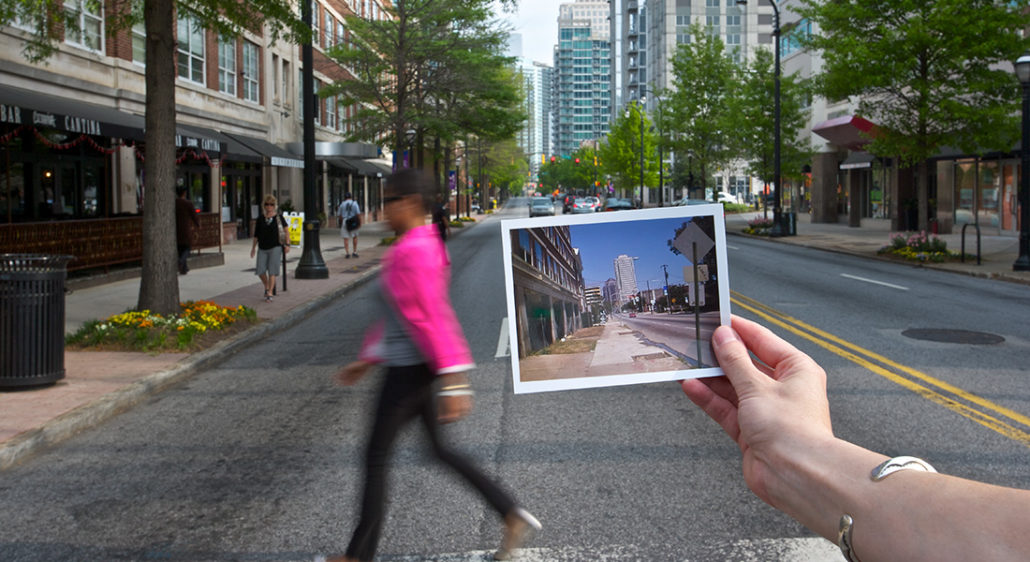 When coupled with the work of the Midtown Improvement District, more than 15 linear miles of streetscapes have been built in one square mile since 2000. This has been a game changer that has been largely self-implementing due to the SPI zoning requirement.

Go Beyond Zoning: As important as zoning is, it only gets you so far. Since the SPI zoning was put in place, we’ve seen project designs that work well – and some that don’t, and we’ve learned from the experience. Each project is unique and zoning is not intended to address all the design decisions that create a great project, so a successful project will go further than mere compliance with zoning. To this end, our work includes early sit-downs with design teams before their development projects even start the official approval process.

A few years ago, we launched our Midtown Owner’s Manual specifically tailored for developers and design professionals, heavy with pictures and graphics to inspire the very best design and answer frequently asked questions about design requirements. 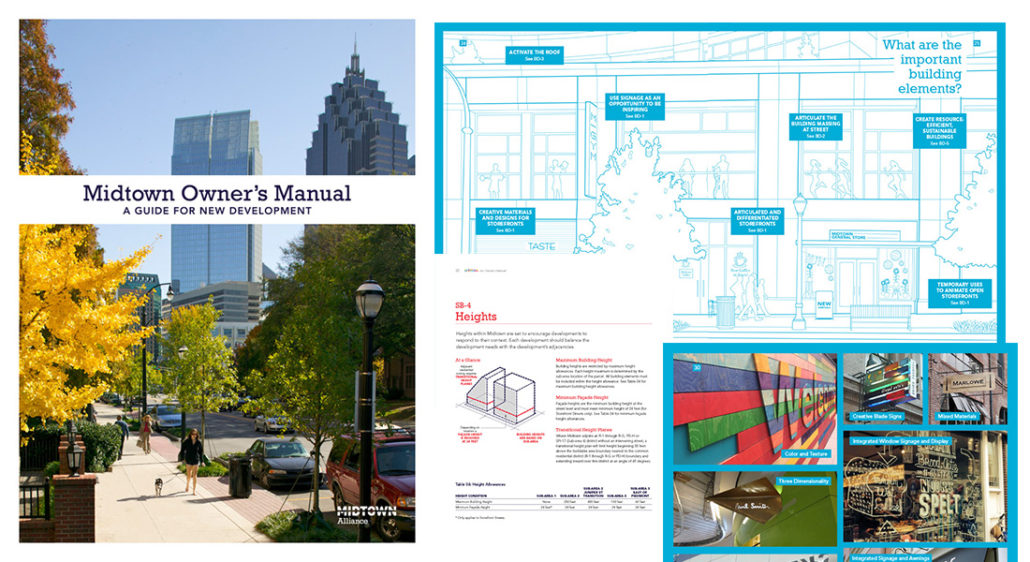 Look for an update in early 2020 to this resource that inspires developers and architects to raise their game for what gets built in Midtown.

Finally, the Midtown Development Review Committee (DRC) is essential to this process. Staffed by Midtown Alliance, the Midtown DRC is comprised of 10 subject matter experts representing residents, property and business owners, Midtown institutions and MARTA. These are volunteers that provide hundreds of hours of expertise annually and we are grateful for their participation and insights. In partnership with the City’s Planning Commissioner and staff, we’ve seen this process evolve to add considerable value for all concerned. In our experience, these mutual wins and a proactive, collaborative approach have made all the difference.

As noted, there are many essential elements to creating a place that gets even better as it grows. We’ll have lots more to unpack in future articles around strategies like safe multi-modal transportation choices, parks and open space, attainable housing and much more.