Anthony Rodriguez, the new executive director of the HUB404 Conservancy. (Photo provided by the Conservancy.)

Planners of “HUB404,” a 9-acre park that would cap a highway in Buckhead, have long nurtured a grand vision for public art and placemaking. Now they finally have someone to lead the $270 million fundraising — a Gwinnett County theater founder with experience at both.

Anthony Rodriguez has been named the first executive director of the nonprofit HUB404 Conservancy. He co-founded the 26-year-old Aurora Theatre, which is now the anchor of the new, $40 million Lawrenceville Arts Center and runs a bevy of programs. That’s a background the Conservancy was seeking as it plans a park that would be heavily programmed with arts and events.

“I don’t just have the project management skills to get this funded and done, but I also have a wealth of experience with that kind of programming,” said Rodriguez in a phone interview. “…As I like to say, I’m a creative solution to a complex problem.” 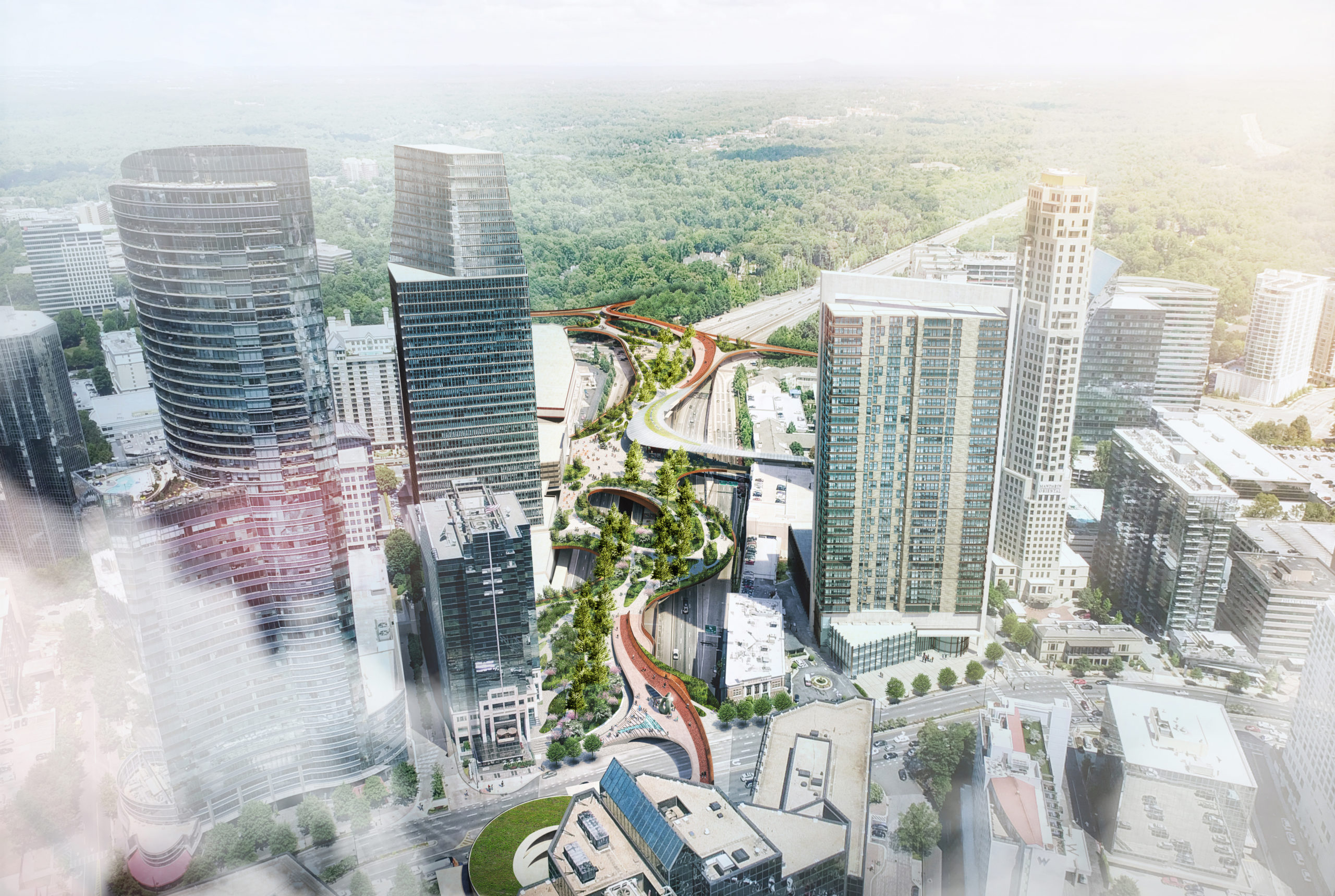 A conceptual illustration of the HUB404 park capping Ga. 400 in central Buckhead. (Illustration by HUB404 Conservancy.)

Bringing in a Gwinnett leader for a Buckhead project may seem avant-garde. But, as the area-code name implies, HUB404 is intended as a regional attraction, as the Aurora Theatre has been. And Rodriguez was raised in the Hampton Hall neighborhood of nearby Brookhaven, where he attended Marist School.

“I grew up in that area, and Buckhead was — in all of my high-school years — the place to be,” Rodriguez said. “And it still in many ways is the place to be, but this [park] literally will be the cap on this.”

The park — formally named HUB404 Atlanta GA — is largely the brainchild of Jim Durrett, who wears several local hats as head of both the Buckhead Community Improvement District (CID) and the Buckhead Coalition as well as serving on the MARTA Board of Directors. The project has been in a conceptual stage for years.

The idea is a half-mile-long cap built over Ga. 400 between Peachtree and Lenox roads, with a direct connection to the Buckhead MARTA Station. Conceptual illustrations show a curving, serpentine structure with such amenities as green spaces, plazas and an amphitheater. The project is intended to expand park space in a business-dominated area that is increasingly residential and to reconnect the neighborhood where the highway plowed through in the early 1990s. The Conservancy claims it would generate billions of dollars in property value and investments, as well as tens of thousands of jobs, along with community and environmental benefits.

Plans for engineering and fundraising were hit by a double whammy in 2020. The COVID-19 pandemic was obviously a challenge. The Conservancy also lost its board chair, Jay Gould, when he was terminated as CEO of the Midtown-based company Interface in a messy dispute. Now the Conservancy is emerging from the pandemic with a new interim board chair, Court Thomas of Atlanta Property Group, and has conducted enough behind-the-scenes fundraising to hire Rodriguez as the new public face of the effort.

“We’re thrilled to have Anthony join the HUB404 Conservancy team,” said Durrett in a press release. “Through his leadership and experience, he will ensure that HUB404 will add accessible public greenspace in Buckhead’s commercial core — a necessity which is critical to create a connected, sustainable and walkable community.”

“Bringing this park to life will depend on funding and partnership from a range of public and private sources,” said Thomas in the press release. “Anthony’s experience makes him well-suited to secure the support needed for a project of this scale and turn it into a reality.” 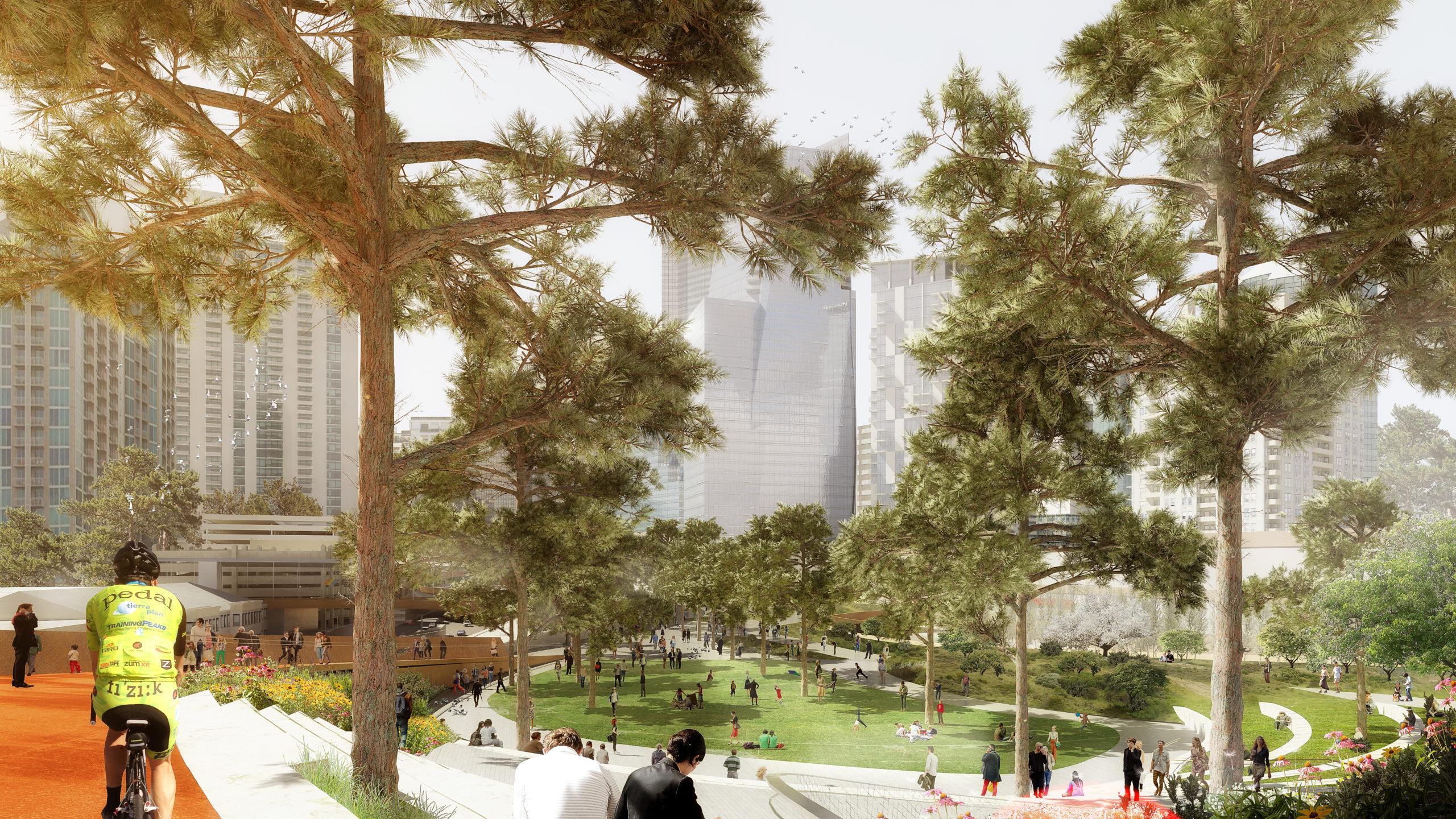 A conceptual illustration of the highway-capping park. (Illustration by HUB404 Conservancy.)

As for Aurora Theatre, it will remain in the hands of its other co-founder, Ann-Carol Pence, who is also Rodriguez’s life partner, and other staffers.

A son of Cuban immigrants and a University of Georgia grad, Rodriguez had early challenges in life that have shaped his approach to projects and the interconnected worlds of arts and business.

“Besides being a son of immigrants, I was born half-blind and I had cancer at 27. Overcoming obstacles is just standard operating procedure for my life,” Rodriguez said. He recalled a former National Endowment for the Arts head saying, “‘The beauty of artists is that we stand in the middle of ambiguity and see it as opportunity,’ and that really struck me because that is absolutely true. If you can do that when everything else around you is unclear and see it as an opportunity, that is very helpful.”

Aurora Theatre has seen enormous success and become an anchor of downtown Lawrenceville redevelopment. Launched in 1996 with one employee and a $50,000 budget, the nonprofit professional theater now has nearly 30 staff members and a $4.2 million budget. In 2007, it turned a historic church into a $7.5 million theater complex, and now is part of the even bigger Arts Center that opened in October. Aurora oversees five venues with Broadway and contemporary theater, comedy shows, concerts, children’s programs and the Spanish-language Teatro Aurora, and even runs the city’s “ghost tour.”

Rodriguez is giving up his roles as the theater’s president and CEO, though he will keep a hand in as a board member and informally as Pence’s partner. He said that with Pence as producing artistic director and Katie Pelkey as managing director, Aurora is in good hands. “Their vision is clear… and at some point, new voices are needed in the room. It doesn’t always need to be mine,” he said.

Well-connected in the business and political worlds, Rodriguez serves on the boards of the Gwinnett Chamber of Commerce and Georgia Hispanic Chamber of Commerce. He also attends the Atlanta Regional Commission’s annual LINK program trips to other cities, where leaders see new programs in the works and network among themselves. (He spoke while attending this year’s LINK trip in Austin, Texas.) On a 2016 LINK trip to Dallas, he and Durrett saw a similar highway-capping project, Klyde Warren Park.

“This one has been something Jim and I have talked about for years,” Rodriguez said of HUB404. “…This is Jim’s vision. And the beauty of working with someone like Jim is that he invites everyone else into that vision and allows what they bring to the table to be part of it.”

Rodriguez said it’s a vision he is passionate about. “We’re literally bridging communities… There is not a bunch of activity in that area except traffic. This will ameliorate that and bring it together,” he said. 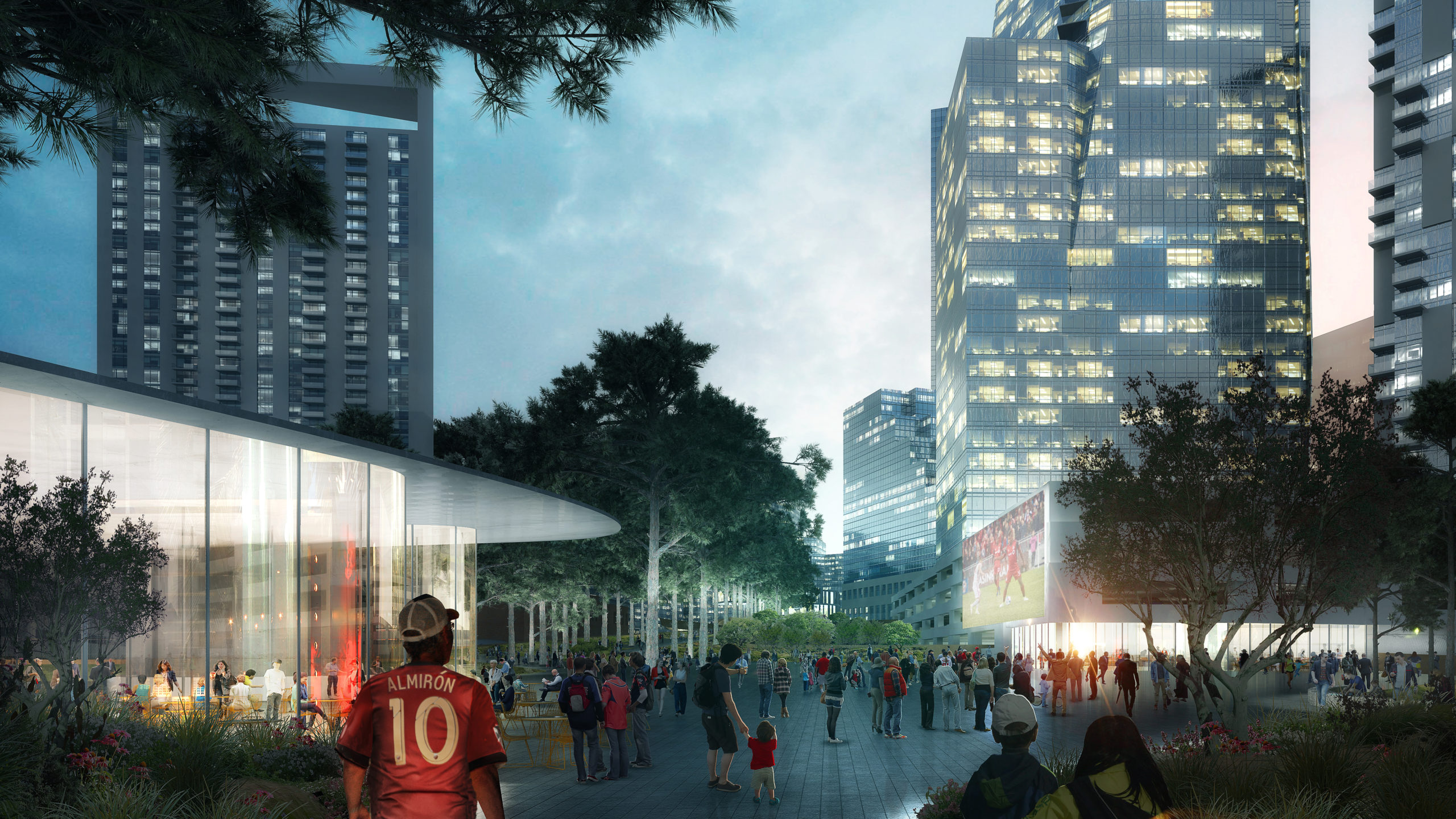 A park plaza as seen in a conceptual illustration. (Illustration by HUB404 Conservancy.)

Among the perspectives he brings to the table is one of cultural diversity in both planning and programming. “I’m the son of Cuban immigrants, so I bring that with me wherever I go,” he said. “That’s who I am. That’s part of my makeup.”

He cited the community engagement principle that planning is “not for us without us,” and said Aurora has aimed to serve the “global majority” with diverse and multilingual programming.

Rodriguez also has experience in running a north metro regional draw. He said only about 60 percent of Aurora’s audience comes from Gwinnett. He’s sure HUB404 can be a similar magnet.

“People are going to want to come to this project and be part of it,” he said. “It’s not nearly as expansive as Central Park in New York City …[but] I have no doubt HUB404 will be the same sort of attractor for folks.”

Rodriguez will remain a resident of Duluth. “And I imagine that I will regularly take MARTA into the Buckhead station,” he said. “I will wear out my Breeze card.”

HUB404 is one of three highway caps proposed in Atlanta in recent years, with the other including a “Midtown Connector” and a Downtown “Stitch.” Rodriguez said he hasn’t heard specific update details on the other projects but would be willing to work with them.

“I think these are incredible projects that are much-needed in our communities. To have something like this, to have three of them — wow — would be incredible,” he said. “If those [others] aren’t completed, the success of HUB404 will inspire those to get done.”

Rodriguez will start work on June 1 in a transitional phase while still working at Aurora, then will go full-time with the Conservancy on Aug. 1. Of the $270 million the Conservancy estimates it needs, the CID is aiming to secure about $170 million in public funding, with Rodriguez seeking the other $100 million from private sources. But those numbers and smaller milestones for such needs as engineering are still being fine-tuned.

“We’ll raise what we need to raise,” says Rodriguez. Stay tuned for more details at hub404.org.