Atlanta was the second stop in the “HUD on the Road” tour.

Dr. David Thomas, President of Morehouse College and others affiliated with the institutions that represent the Atlanta University Center Consortium (AUCC), welcomed Fudge at the AUC library to see how they can help alleviate the housing crisis in the Atlanta metro area.

The Secretary’s tour, called the “HUD on the Road,” is a local community initiative that brings together HUD leadership with local officials, stakeholders, and others to discuss the department’s programs, policies and priorities. 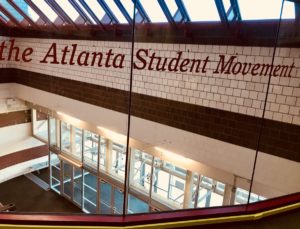 The Woodruff Library at AUC. (photo by Kelly Jordan.)

“I have made it my goal to visit all of the cities with large minority populations because I think that until we start to deal with the most underserved, we cannot continue to grow as a nation,” said Fudge.

“Because of the cost of housing in the community going up, students have been priced out and have become creative either to have to move extremely far away from campus to find reasonable, affordable homes or ‘couch surf’ with their friends and bump through friend-to-friend-to-friend,” said Michael Hodge, Executive Director of the AUCC.

Clark Atlanta University, Morehouse College, Morehouse School of Medicine and Spelman College make up the AUCC to create the world’s largest consortium of HBCUs that educate thousands of students each year. Its purpose is to encourage collaboration within the institutions and offer services that benefit students and the West End community with shared resources.

“At least 50 percent of our students are Pell eligible, meaning they have a certain income that qualifies them for assistance,” Hodge said. “So we’re working on trying to seek ways in which we can use that status that they have to help them with their housing,”

Fudge mentioned that the Biden administration has been working to create solutions for those in need. For example, neutralizing student debt will reduce the amount owed on student loans resulting in mortgage lenders considering them credit-worthy when applying for a home loan or renting an apartment.

The Urban League of Greater Atlanta’s Housing Program gives approved counseling from HUD that helps with financial preparedness and mortgage readiness for applicants to purchase their own homes.

The Biden administration is also working on adding $100 million in funding down payment assistance nationwide.

“People who rent, whether in public housing or any other kind of housing, don’t normally have credit. So we’re now saying any credit you have for paying rent on time to comply to your credit score,” Fudge said.

The Secretary thinks that bringing housing assistance to the residents of Atlanta is not an individual effort. Getting help from local, state and federal government officials along with community partners like the AUCC will resolve this long-time crisis.

“I would say that it is important for every single group of people, from the mayor to HBCUs, who can make a change to come together and make that change. We can’t work in silos and take care of entire communities. We have to work together,” Fudge said.