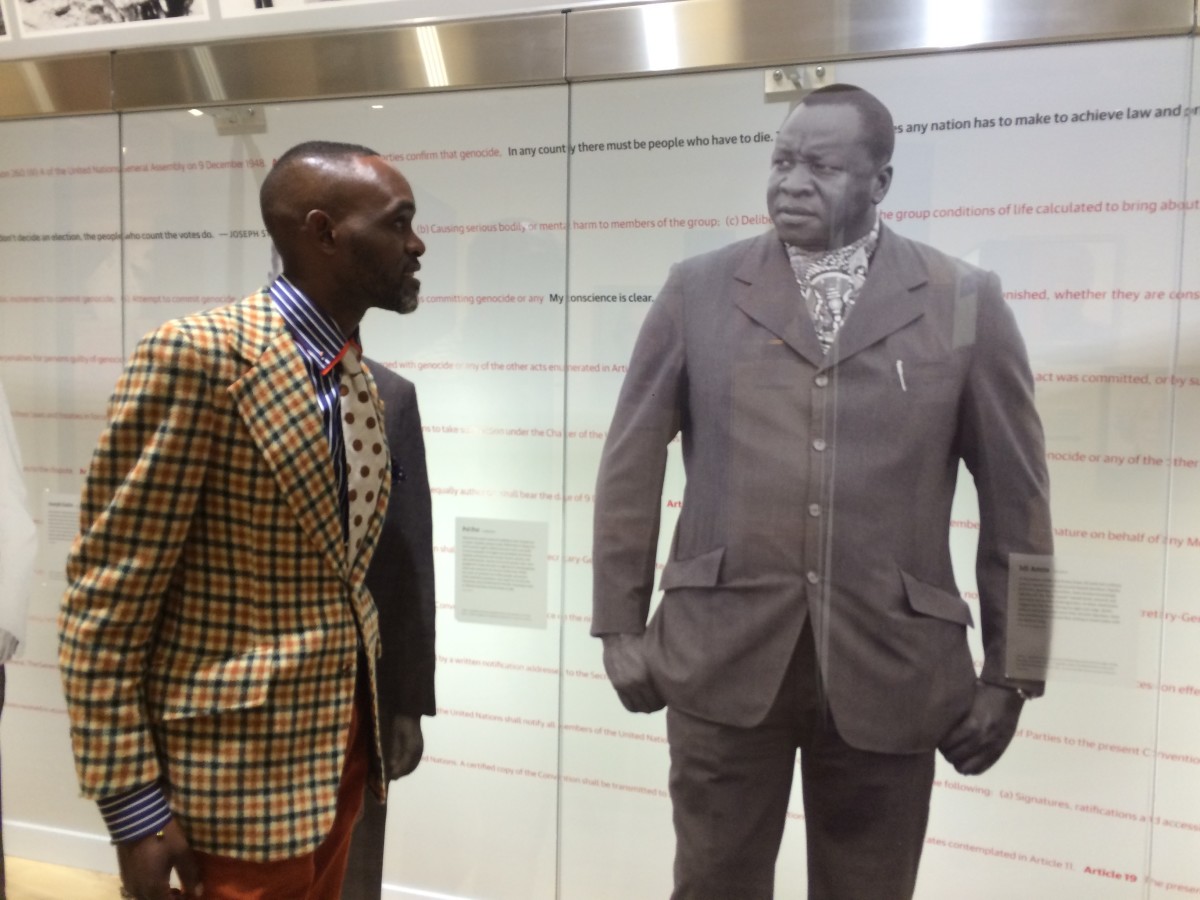 By Maria Saporta
As published in the Atlanta Business Chronicle on December 4, 2015

The new CEO of the Center for Civil and Human Rights ­— Derreck Kayongo — is a living embodiment of the Center’s mission.

As a native of Uganda, he and his family fled the country because of the tyranny of its former president, Idi Amin. They became refugees living in Kenya for five years until Kayongo was able to come to the United States as an international student in 1995.

In one of his first stays in a U.S. hotel, he became obsessed with the three bars of soap in his bathroom. Amazingly, every day there were three new bars of soap. Knowing the value of living in sanitary conditions in the developing world, Kayongo began thinking how the soap that was being thrown away could be recycled and sent to places around the world where soap was a luxury. 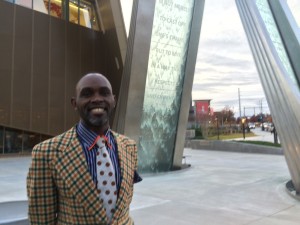 When he told his father, who had returned to Uganda and become a member of Parliament, about his idea, Tom Kayongo told his son he first needed to work in the United States. “Go learn,” he told him. “Pay attention.”

Finally in 2009, Kayongo founded the Global Soap Project, working with hotel chains and other partners to recycle discarded soap and ship it around the world.

Along the way, he met then-Atlanta Mayor Shirley Franklin, who introduced him to Phil Kent, then-CEO of Turner Broadcasting System Inc. Kent became the first donor of the Global Soap Project.

Fast-forward to 2015 when the Center began searching for a new president and CEO following the departure of founding executive Doug Shipman. Veronica Biggins, a managing partner of Diversified Search who was helping the Center find its new leaders, called Kent, who coincidentally had made the first philanthropic gift to the Center. Did he know of a potential leader? Kent recommended Kayongo.

“The universe has kind of conspired for me being here,” said Kayongo, 45, during his first week in his new job. A press conference to introduce him was scheduled to be held on Dec. 4 at the Center.

Kayongo remembered when he first toured the Center. When he went to the Human Rights gallery on the third floor, he stood face-to-face with a visual cut-out of his nemesis — Idi Amin — standing among other men of evil including Adolf Hitler. “When I saw Idi Amin, the Center was speaking to me,” Kayongo said. “We all can find ourselves in the Center. Nobody has occupied that space yet, to turn civil rights and human rights into a global voice. We have so much to do to make civil and human rights sexy.”

Franklin, who chairs the Center’s board, said it was fortunate to find “someone like Derreck, who has a long history in the field, both personally and professionally.”

Franklin said Kayongo is “passionate about the subject; he’s informed; he’s experienced; and he’s been in Atlanta.” She added that he also will reinforce the international mission of the Center. 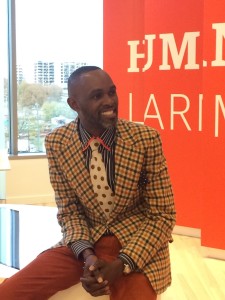 “We will expand everything we are doing to include more people, more issues and more debate, and hopefully out of that, more inspiration,” Franklin said about the Center’s next chapter under Kayongo’s leadership.

Biggins said the search ended up selecting a nontraditional leader for the Center rather than a museum director.

“It’s not a museum, it’s a center,” Biggins said. “Derreck is a global person. He will open the doors and invite people in. He made me realize the value of soap. I will never, ever look at soap in the same way again.”

When meeting Kayongo for an interview, this reporter was struck by his flamboyant attire — a polka-dotted tie, a plaid jacket, a striped shirt, corduroy pants and multi-colored socks. He credited his mother, a seamstress, who turned him into a mannequin as she sewed everything from wedding dresses to other colorful clothes. “Fashion is a form of language that tells a story,” Kayongo said. “If you are good at it, it becomes a a conversation piece. I’ve always enjoyed colors. Most Africans love color.”

A.J. Robinson, president of Central Atlanta Progress and chair of the Center’s search committee, said he has met with Kayongo at least five times, and his outfits always have been memorable — guaranteed to give the Center a new flare.

“Derreck hit on a number of themes,” Robinson said. “He’s got presence and charisma, and he is a very engaging leader. He has a passion for trying to solve the world’s problems, big and small.”

Robinson continued: “His personal story is relevant to the Center’s mission. He has had really good relevant experience. He captured our imagination. The critical thing for us as a board was finding someone who could articulate the mission of the Center beyond its geography. We want to be a place to discuss the big issues that impact our world today.”

Kayongo will focus on three areas. “We want to be known globally. We want to drive as much traffic to the Center. And I want to make it sustainable and make sure we are well-endowed,” he said. “We can’t afford to have these stories die.”

Even though Kayongo has had more experience in the human rights area, he said he grew up learning of Martin Luther King Jr., Nelson Mandela and Mahatma Gandhi, the “great trifecta” of leaders who preached nonviolence and civil rights. 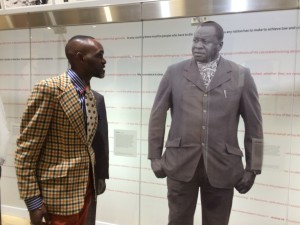 “When you get here in Atlanta, you are swallowed up by this incredible history,” said Kayongo, who has lived in Atlanta since 1998 with his wife Sarah and two children. “My whole talent and skill has been crafted in Atlanta.”

Kayongo said Shipman and his team did a wonderful job getting the Center developed and opened. Now the challenge will be to make it a Center for dialog, discussion and debate on today’s issues.

Robinson agreed. “All of us old-timers see the potential,” he said. “We wanted to find the right person to take us there. We cannot rest on our laurels of being a civil rights center. It’s not expansive enough. It has to be relevant today and in the future.”

And whenever he will need inspiration, Kayongo will go up to the third floor, stare the image of Idi Amin in the eye and tell him, “You destroyed us. You ruined our lives,” Kayongo said. “But now I have a chance to reverse some of that destruction. You are not the only voice here. We have other people who can speak up against evil. I’m so eager to use that story to help people remember. I will do a good job here.”

Previous Article
Metro Atlanta Chamber in 2016 to push transit and an inclusive region
Next Article
Company that offered best financial package chosen to rebuild interchange at Ga. 400/I-285