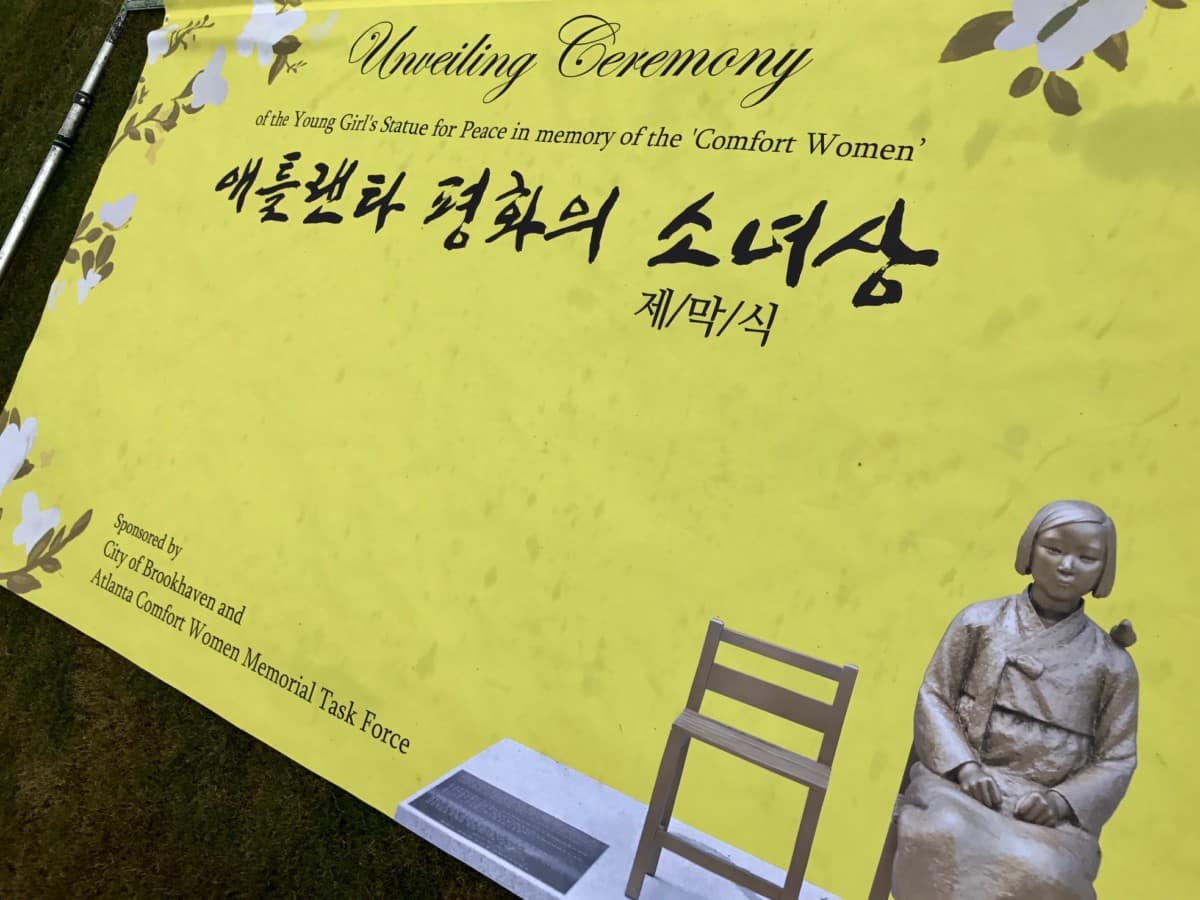 In Brookhaven, a new 'comfort women' statue of a seated girl memorializes women and girls who were trafficked and sexually enslaved by the Imperial Armed Forces of Japan before and during World War II. Credit: Kelly Jordan

The new statue in a Brookhaven park of a seated woman is small — about five feet high. But the attention for the comfort women memorial was large, making headlines across the Pacific Ocean and sparking opposition from the Japanese Consulate in Atlanta.

More than 200 people gathered in the drizzle at Blackburn Park II on Friday morning for a ceremony part in English, part in Korean, about sex trafficking past and present. 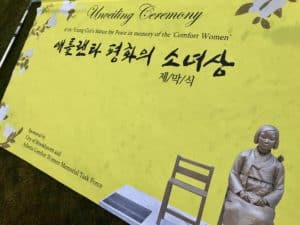 In Brookhaven, a new ‘comfort women’ statue of a seated girl memorializes women and girls who were trafficked and sexually enslaved by the Imperial Armed Forces of Japan before and during World War II. Credit: Kelly Jordan

The statue commemorates as many as 200,000 girls and women from 13 Asian-Pacific nations who were trafficked and sexually enslaved by the Imperial Armed Forces of Japan before and during World War II.

The victims and survivors, mostly Koreans, are known euphamistically as ‘comfort women.’ A Japanese official in Atlanta has maintained that there are widespread misconceptions about comfort women. But identical statues in Busan and Seoul, South Korea, serve as rallying points for people who say that Japanese apologies for wartime sex slavery in Japanese military brothels so far are not sufficient.

At the Brookhaven ceremony, a riser in the back of the tent accommodated several TV news crews. Some spectators huddled under umbrellas at the edges of the crowded tent, while others stood under a nearby pavilion.

The statue commemorates girls and women like Kang Il-chul, who was a young woman when the Japanese armed forces came to her home in Korea.

“I was one of those girls … who were dragged by Japanese people, just like [a] dog or animal, not like a person, to China,” Kang said via an interpreter.

She said she had no way to get home after World War II and that she made her life in China. Kang said she wanted to let people know about this historical issue and what happened to her during the war.

“I don’t know if Japanese people are aware of this historical issue or not, but now you are building this memorial, the girl statue here, it is truly amazing,” Kang said.

Baik Kyu Kim chairs the Atlanta Comfort Women Task Force, the group that worked to get the statue installed. He said the purpose of the task force is to stand together and bear witness to one of the darkest moments in human history.

“Only by remembering and acknowledging the human truth can we move forward to eradicate sexual violence and human trafficking in our community, both local and global,” he said.

Brookhaven Mayor John Ernst said that the statue commemorates an important and tragic history and is an educational reminder of the worldwide atrocity of human trafficking.

“By establishing this memorial we raise the awareness of the ongoing problems of sexual and human trafficking taking place in the metro area and the world today. The city of Brookhaven is proud to join the growing list of progressive cities around the world that have installed this memorial to recognize comfort women and to talk about their suffering,” Ernst told the crowd.

The statue found a home in Brookhaven after Atlanta’s Center for Civil and Human Rights backed out of an offer of space in March. That came after  objections from the Japanese Consulate in Atlanta, which warned that the statue would be divisive. 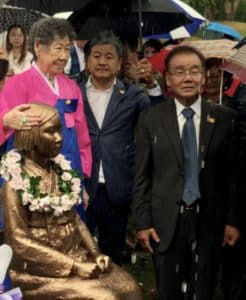 Kang Il-chul, a surviving ‘comfort woman’ stands with the new memorial statue in Brookhaven alongside Baik Kyu Kim, who led the task force that pushed to have the statue installed. Credit: Kelly Jordan

At the time, the consulate said in a written statement that the governments of Japan and South Korea have resolved the comfort women issue and that the statute may cause discrimination, humiliation or bullying of members of the Japanese community in Atlanta.

In the days before the statue was unveiled, the Japanese consul in Atlanta made headlines in Korea for an interview with Atlanta’s Reporter Newspapers, in which he said that there were not 200,000 comfort women and that they were not taken by force.

The Japanese Consulate in Atlanta did not reply by Friday afternoon to a Tuesday email or voice mails left on Thursday and Friday seeking comment.

The evening before the ceremony, Tomoko Ohyama from the consulate spoke at the regularly scheduled Brookhaven City Council meeting.

She said her government’s stance is that the city should take a pause to reconsider installation of the statue.

“The comfort women statue involves a very sensitive issue between Japan and the Republic of Korea. Few believe that this statue is not aimed at Japan and only intends to promote a totally different issue; and this statue will cause disunity and even confrontation among the local communities in Brookhaven and beyond, which is in the interest of no one,” Ohyama told council.

She also said that the government of Japan has maintained that there are widespread misconceptions about comfort women.

“The full-scale fact-finding study by the Japanese government in the 1990s did not find any historical documents that showed hundreds and thousands of women were forced into sexual slavery, all phrases which are used in the city council resolution of May 23rd,” she said.

After the Friday ceremony, Mayor Ernst deferred questions about the international politics around the statue to diplomats and foreign ministers.

“[Our statue] is about human trafficking and a historic reminder of a current event,” he said.

In front of a crowd of reporters and TV news cameras , he said he hopes the statue gets people talking about sex trafficking.

“Would you all be here if I was doing a press conference about sex trafficking? Probably not. But the fact that we did something that has a historical reminder, has some context and history … brings people out to discuss it.” 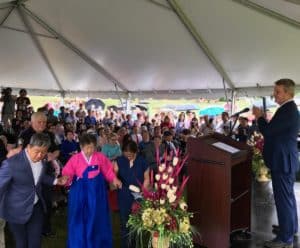 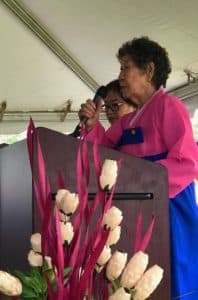 Kang Il-chul speaks at the dedication of the comfort woman statue in Brookhaven. Credit: Kelly Jordan 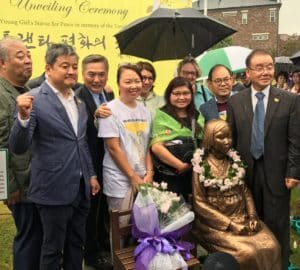 Members of the Atlanta Comfort Women Memorial Task Force pose with the statue that they worked to have installed in metro Atlanta. Credit: Kelly Jordan 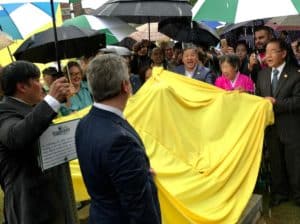 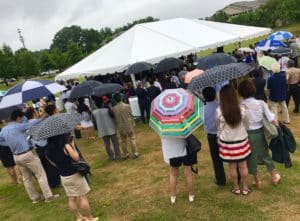 Spectators huddled under umbrellas in Brookhaven Friday, ahead of the unveiling of the city’s comfort women memorial statue. Credit: Kelly Jordan 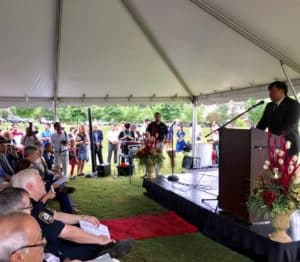 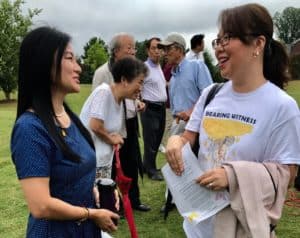 Jiyeon Lee, left, a Korean pop star who’s also an Atlanta restaurateur, sang at the dedication of the comfort women statue. Helen Kim Ho, right, is a leader of the Atlanta task force that found a home for it. Credit: Kelly Jordan 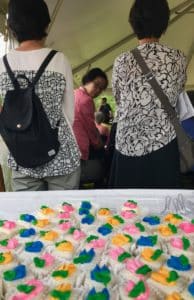 A guest peers at snacks served at a ceremony to mark the dedication of Brookhaven’s comfort women statue. Credit: Kelly Jordan