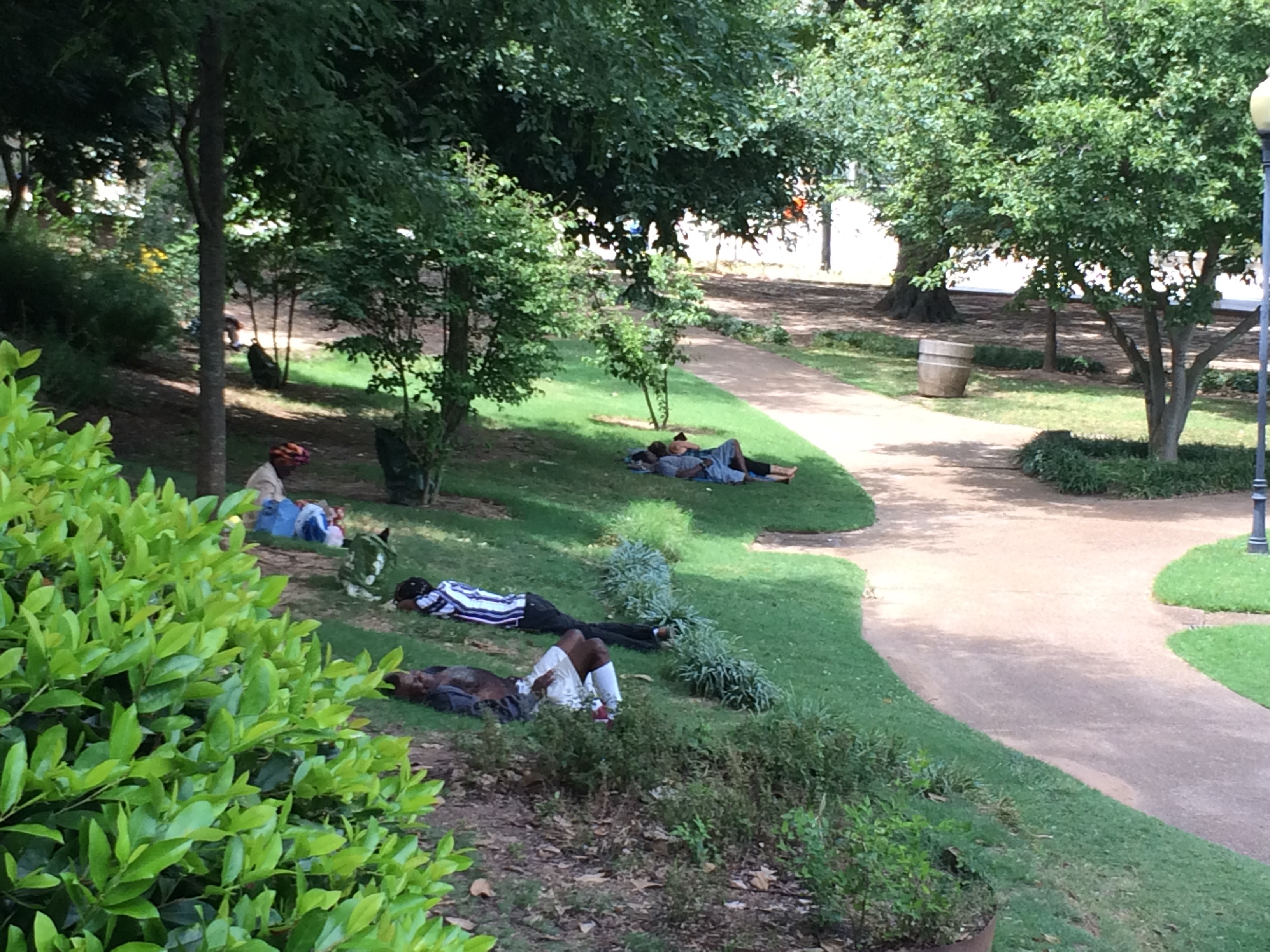 A fence with gates that can be locked is be the solution for managing homeless and other individuals who linger in Downtown Atlanta’s Hurt Park. Yet to be determined is the impact on routine homeless programs provided there – including one sponsored by Mrs. Georgia America 2017. 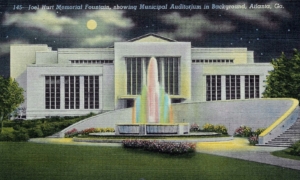 Hurt Park, once a picture postcard site that featured an illuminated water feature, is to be restored and managed by Georgia State University. Concerns are arising over how the park’s future operations will affect the homeless who spend time there. Special to SaportaReport

The concern about locking the homeless out of the park – and having them spread to other sections of Downtown Atlanta – is capsulized in one sentence in a staff report from Atlanta’s Urban Design Commission:

Atlanta owns Hurt Park and Georgia State University has been working since at least 2016 on an effort to refurbish the park, offer an array of programs and control the gates. Hurt Park opened in 1940 and later was heralded as a major accomplishment in the first administration of legendary Atlanta Mayor William B. Hartsfield. The park is located along the Atlanta streetcar route on GSU’s northern border, a few blocks west of Grady Memorial Hospital.

The fence planned around the perimeter of the park has already been approved by Atlanta’s Department of Parks and Recreation, according to the staff report by Atlanta’s Urban Design Commission. The board that oversees the UDC accepted the report and without comment at its Sept. 25 meeting, according to minutes of the meeting.

The Parks Department’s approval of the concept of a fence evidently supersedes concerns raised by the UDC staff. The staff report suggested that locking the park would make it less attractive to average passersby and compel the homeless to find other places to spend time. Details of the design of the fence are to be approved at a later date, according to the report. 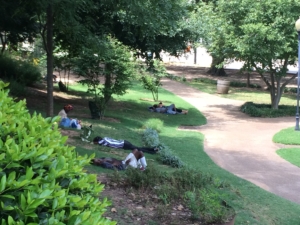 The UDC staff suggested that GSU offer social programs for the homeless. GSU responded that HOPE Atlanta will be handling those programs.

One issue that apparently remains to be resolved is how GSU will respond to programs for the homeless that already are underway – including an event titled Feed the Homeless that has been occurring for some time and is sponsored by With Love Global, founded by LaCrisha Saba, the 2017 titleholder for Mrs. Georgia America.

The next event is slated for Oct 20 and is to feature Halloween costumes and a “Superhero Theme,” according to its Facebook post. Saba accepts cash donations via PayPay and provides a menu for supporters to bring appropriate food items. The Oct 20 event calls for Halloween costumes and the menu theme is a taco bar, which calls for donations of beef and chicken, shredded cheese and other such items, according to the list posted on the event’s Facebook page.

Bibles, carrying bags and toiletries are always in demand, according to a request that states:

At least one church group has offered an outreach program in the park, on Sept. 29. Congregants of Lord’s House Community Church, in Norcross, posted photos on a Facebook page and observed of the event at Hurt Park: 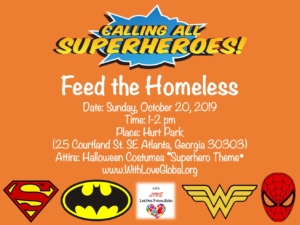 The next food program at Hurt Park sponsored by With Love Global, founded by Mrs. Georgia America 2017, is to a be a Halloween event with a superhero theme and a taco bar. Credit: facebook.com/WithLoveGlobal

The UDC staff report regarding the impact of the planned fence on the homeless included these observations. They speak to the ongoing issues regarding responsible outreach programs for individuals who, for whatever reason, don’t have an abode:

GSU and surrounds by Kelly Jordan