So said Barry Broome, CEO and president of the Greater Phoenix Economic Council.

Broome, who is one of the leading players in promoting economic development for Arizona’s largest metro area, has been the top business leader “fielding most of the immigration calls” from people outside the state.

When Arizona Gov. Jan Brewer signed a controversial bill regarding illegal immigrants last week, the state has been in the middle of a firestorm of negative national attention.

Half-jokingly, Broome said the legislature should allocate his economic development group $81 million for a branding campaign to counterbalance all the critical outcry.

“Arizona has a very tough brand,” Broome told a delegation of about 100 top Atlanta leaders. “It’s going to take a long time for Arizona to re-establish its brand. Even if you fix the law, it’s going to be very hard to put the genie back in the bottle.” 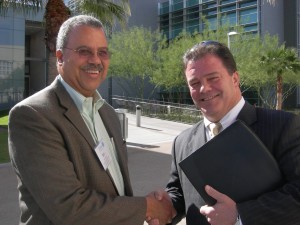 Despite the questionable actions by the Arizona state legislature and governor, Broome said Phoenix does have many factors in its favor. It has become a national leader in the development and manufacturing of solar technology and other renewable energies. In fact, Arizona State University has established a School for Sustainability.

Solar companies are finding their way to Arizona include a major one from China, and the state is embracing renewables as one of its best hopes for future economic development. 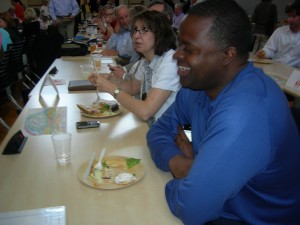 “From a sustainability standpoint, we are big innovators on construction,” Broome said, adding that when the housing market begins to rebound, more renewable energy alternatives will be incorporated.

Earlier in the day, urban expert Grady Gammage said Arizona is a state looking for its identity.

“This is the Wild West,” Gammage said. “We are very young, And we are very insecure (partly because it’s overshadowed by Texas on the east and California on the west).”

The identity crisis extends to the limited number of Fortune 500 headquarters in Phoenix.

“We don’t have a clear sense of who we are,” Gammage said. “The largest employer in Phoenix is Wal-Mart. We had Motorola, but they left. Intel is leaving.” 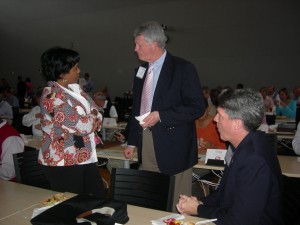 “Some of you must be asking why you came to Phoenix. Atlanta is a real city, a world-class city,” Gammage said. “By any measure, why would you want to come to Phoenix.” 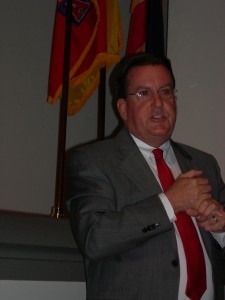 Broome, who spoke later in the day, acknowledged “that there’s some truth” to what Gammage was saying. But he added that it’s to Phoenix’s benefit that it’s not a Fortune 500 town because it is not so dependent on a handful of companies and can focus its attention on emerging technology firms.

Broome also disagreed with State Sen. Russell Pearce, who pushed for the stricter immigration bill because of public safety and he disputed the statistic that Phoenix has more kidnappings than any city other than Mexico City.

“There are not that many kidnappings going on,” Broome said. “I have no idea where (those statistics) come from. We are not chopping off people’s heads.”

Yet Broome admitted that he now has a tougher job in letting the world know that Phoenix is a safe city and now that the immigration law has been signed into law.

“On conventions, tourism and visitation, it will be pretty severe,” Broome said of the economic impact of a potential boycott of Arizona.

“We have been calling for some logic and some understanding,” Broome said. But part of Arizona’s appeal is its independence and its willingness to support laws that could have a detrimental economic impact.

As Broome said: “the Tea Party is almost a mainstream political party in Arizona.”