A manatee that's been rescued from a temporary shelter from cool water is to be loaded onto the boat on the first step of a journey to SeaWorld Orlando, and then back to sea. Credit:Clearwater Marine Aquarium Research. Rescue conducted under USFWS permit 770191.

Almost 12 years after a deadly explosion at a sugar plant near Savannah, the Imperial Sugar refinery is being commended for helping to rescue a manatee and her calf. The two animals were transported to SeaWorld Orlando for treatment and are to be released. 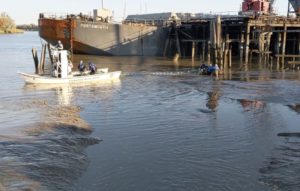 To rescue two manatees taking shelter from cool water near a warm-water discharge pipe at the Imperial Sugar refinery, workers stretch a net across the mouth of a waterway where the animals were sheltered. Credit: Clearwater Marine Aquarium Research. Rescue conducted under USFWS permit 770191.

The two animals had taken refuge from cool water temperatures by huddling around a pipe that discharges warm water from the Imperial Sugar refinery into the Savannah River.

The flow of warm water was scheduled to be shut off during a routine maintenance procedure that was to start on Thanksgiving Day. The company opted to minimize the work to be done and provided staff during the holiday to help the animals during the rescue procedure.

The statement from DNR did not include a comment from any with Imperial Sugar, nor does there appear to be a mention on the company’s website.

The mother manatee weighs 1,530 pounds and her male offspring weighed 425 pounds, according to DNR’s statement. Both were taken to SeaWorld Orlando. The calf began nursing as soon as the pair reached SeaWorld. The plan is to release them soon. 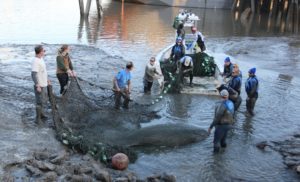 A manatee that’s been rescued from a temporary shelter from cool water is to be loaded onto the boat on the first step of a journey to SeaWorld Orlando, and then back to sea. Credit: Clearwater Marine Aquarium Research. Rescue conducted under USFWS permit 770191.

The two animals joined another manatee rescued from Georgia and taken to SeaWorld. A mother and calf were recovered a few days before Thanksgiving, by many of the same organizations, from a tidal pond on a golf course on St. Simons Island. The mother survived, but the calf died from the cold stress, according to DNR’s statement.

In 2008, the Imperial Sugar refinery was the site of what federal investigators described as a, “huge explosion and fire” fueled by, “massive accumulations of combustible sugar dust through the packaging building.”

The casualty list included 14 dead and 38 others who were injured, according to the report by the U.S. Chemical Safety Board, an independent federal agency charged with investigating industrial chemical accidents.

According to the findings:

Previous Article
Newly appointed Georgia senator: ‘You don’t have to be shrill to be tough’
Next Article
WarnerMedia renames Techwood in Ted Turner’s honor: ‘Never have I lived through something like this’