Behind this week’s announcement of an Atlanta-Fulton County “Repeat Offender Tracking Unit” is an effort to fix enormous criminal-record data gaps about such offenders. Maybe the biggest — a staggering backlog of 1.6 million felony-charge outcomes, not yet properly recorded, that has left repeat offenders underreported and many acquitted people still wrongly in the system.

The Fulton District Attorney’s office and the Metro Atlanta Chamber of Commerce are teaming on a new program to clear that backlog. And Fulton D.A. Fani Willis recently said it’s only part of an “unbelievable” case-records mess she inherited from predecessor Paul Howard.

Repeat offenders — defined as those with three or more felony convictions — have long been a target of police and prosecutors as essentially career criminals and outsized drivers of major crime. In Fulton, those authorities have long expressed concerns about judges giving lenient bail and sentences to repeat offenders, in part due to incomplete records that may not make their prior convictions obvious. The Atlanta Police Foundation (APF), a private nonprofit, has long focused on the repeat-offender issue and in 2019 issued a report from a study commission recommending stronger records and a crackdown approach. 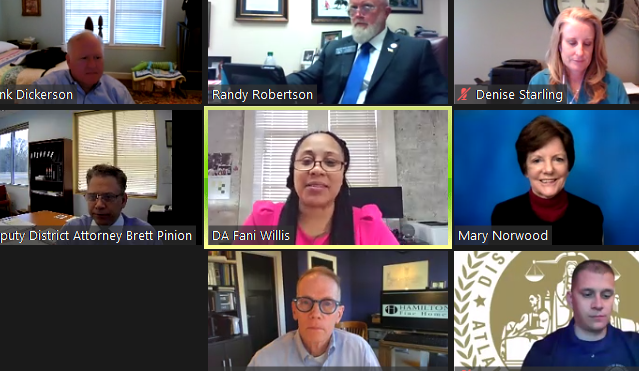 Fulton County District Attorney Fani Willis, in the highlighted box in the center, speaks at the March 24 virtual meeting of the Buckhead Public Safety Task Force, where she addressed the felony disposition backlog and many other issues.

The new Repeat Offender Tracking Unit is essentially a mechanism to coordinate such information-sharing. Its partners include APF, the D.A.’s office, the Atlanta Police Department and the Fulton County Sheriff’s Office. Describing the unit at a March 24 meeting of the Buckhead Public Safety Task Force, Willis said it would “put what I would call a scarlet letter” on repeat offenders throughout crime databases.

But what if the records are incomplete or incorrect? “This is one of those ‘oh boy’ moments,” Willis said of her discovery of Fulton’s 1.6 million-charge backlog after she took office in early 2021.

The issue regards what is called the “disposition,” or judicial outcome, of a felony criminal charge after the accused has gone through the court system: conviction, dismissal, acquittal and so forth. Each charge gets a disposition so that 1.6 million backlog involves some lesser number of defendants who faced multiple felony charges. The dispositions of charges for a defendant are recorded in the Georgia Crime Information Center (GCIC), a statewide crime database used by many local, state and federal criminal justice agencies.

Fulton’s backlog likely means that some repeat offenders are not recorded as such and that prosecutors and judges struggle to get accurate background information on defendants — Willis cited federal prosecutors in the U.S. Department of Justice’s Northern District of Georgia as among those complaining. The backlog also means that some people who were found not guilty are still listed as having felony cases pending — a big problem for background checks for such basics as jobs or rental housing.

The Metro Atlanta Chamber’s exact role in partnering on the backlog cleanup is unclear, but the organization cites those consequences as its reason for getting involved.

“The Metro Atlanta Chamber believes public safety is a business issue,” said Dave Williams, its senior vice president of public policy, in a written statement. “…Judges need to be able to see a complete and accurate criminal history for defendants appearing before them. Further, incomplete or inaccurate dispositions create serious workforce and housing barriers for individuals whose charges were dismissed or who were found not guilty.”

The backlog-clearing program will launch in early April, Williams said, and will include the design of training for criminal justice system officials to “streamline” disposition entries into GCIC.

Williams also pointed to legislation pending in the Georgia General Assembly, Senate Bill 441, that aims to standardize the use of GCIC. The language of that legislation cited a report that up to 7 million charges statewide may be lacking a proper disposition record.

To Willis, the disposition issue overlaps with her focus on gangs as a reputed primary source of violent crime and her attempt to improve the tracking of gang members. That effort has even more data holes and is fraught with more fundamental problems. Unlike the bright-line definition of whether someone got convicted for a felony or not, defining “gangs” and “gang members” is tougher.

Willis depicted the GCIC dispositions as just one of several major issues she encountered since defeating Howard in the 2020 election. Willis formerly worked for Howard, who left office amid scandals and controversies, most notably including a federal criminal investigation targeting him for alleged misuse of money from a nonprofit founded to combat gang violence.

Willis made it clear there’s no love lost between her and her former boss. She said “there was zero transition between me and the former district attorney. To this day, we still have not had a conversation.”

Among the surprises when Willis took office, she said, were “boxes and boxes” of case files crammed into various offices. “There were literally office doors you could not open,” she said. One consequence of the disorganization, she said, was another records issue: approximately 52,000 cases had not been properly closed in the D.A.’s system. She said all of those cases are now filed as closed.

The system of preserving evidence from cases was a “complete mess,” Willis said. She alluded to her recent successful effort to get the county to build a “state of the art” evidence facility. “This is not sexy, right?… But this is crucial to being able to prosecute cases accurately,” she said.

Willis also said she has established a “justice liaison” to connect her office with local police departments, describing the relationship under Howard’s latter years as “broken.”