There have been some theatrics involved — we’re about to talk about Louisiana, after all — but the nation should be paying more attention to what’s happening in Baton Rouge. It could be a warning for the rest of us. 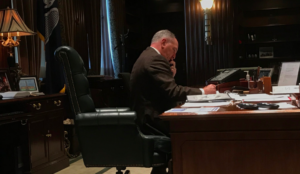 Last week, Louisiana Gov. John Bel Edwards sent letters to 37,000 Medicaid recipients, including 30,000 nursing home residents, informing them that they could lose their Medicaid money and face eviction by July, based on the budget passed by the Republican-majority Louisiana House.

Republican legislators protested angrily, calling the letters “an unnecessary political scare tactic,” intended to push GOP lawmakers into making a temporary tax increase permanent. Edwards maintains it was his responsibility to inform recipients in time for them to seek other assistance, and not at the last minute.

“This letter is scary, but it’s not a tactic,” said Edwards budget chief Jay Dardennes.

Last Friday, the Republican Louisiana Senate produced its budget, which patched the Medicaid hole left in the House budget at the expense of nearly everything else, slashing money for colleges, parks and law enforcement and eliminating the food stamp program. “I hate this budget,” one legislator said.

That’s the really scary part. Louisiana has evolved a complicated web of special sessions and stopgap measures to bridge its budgetary problems which involves a lot of drama like last week’s letter. But the impasse it has arrived at mirrors the great problems facing all the states, as an aging population puts increasing strain on the social safety net, and new tensions between young and old, rich and poor, and, as always, black and white.

Last year, U.S. Sen. John Kennedy, who is thinking of challenging Edwards in the next governor’s race, wrote the governor a letter suggesting several things he could do about the Medicaid problem. First among these was to implement a work requirement for able-bodied Medicaid recipients, an idea being pushed by the Trump White House.

The intention wasn’t to unfairly burden those who couldn’t work, Kennedy said, but to require work from “our colleagues, our friends, our neighbors who are able to work, but choose not to.”

In Kentucky, Michigan and Ohio, distinctions have been drawn between those colleagues, friends and neighbors which have raised questions of racial discrimination. All these states have come up with provisions exempting white, rural and predominantly Republican voting areas where unemployment is high, but not inner-city neighborhoods ringed by affluent suburbs, where the overall average is lower.

What these exemptions reveal is the essentially punitive motive for the work requirement, and the reluctance of legislators to allow the measure to reach its logical conclusion. Like the requirement to drug test food stamp recipients so popular in state legislatures, it’s based on the idea that the social welfare system is being overrun by a legion of the shiftless and dishonest. There are seldom any hard dollar estimates of what this cost might be, because requirements such as this really aren’t hard dollar ideas. They are grievance ideas.

Fraud is a grave danger to the Medicaid system, but the biggest exploiters of the system aren’t shiftless at all. They are downright industrious in their dishonesty, and very seldom are they the recipients.

Some Republicans have referred to the draconian Senate budget introduced last week as the “pretend budget” because no one really intends to make cuts that deep. Edwards’ letter was an obvious attempt to force the issue on taxes and the costs of the social safety net, and put an end to pretending,