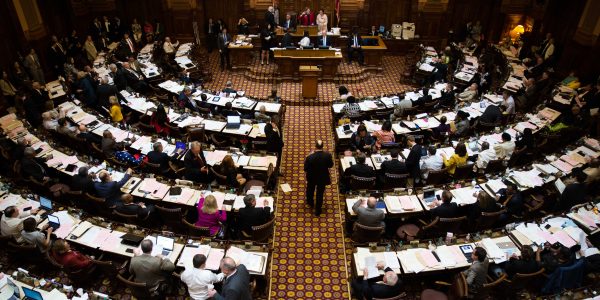 The legislative year hasn’t ended yet in a lot of states, and the evidence isn’t overwhelming. But based at least on the reduction in material they’ve provided late-night monologues, lawmakers around the country seem to be going about their business with significantly less posturing this election year.

Georgia, where lawmakers moved quickly on after demonstrating their NRA credos in the Delta flap, eventually pulled off a major accomplishment with the passage of a bill which envisions a truly regional transit system. It’s one of several states where legislatures have been up to more than baseline electioneering this year.

In a normal election year, we’d have seen more legislative stunts, designed to fire up the base in the fall. Maybe the commander in chief has consumed the appetite for stunts. There just may be a premium this year on politicians who take their jobs seriously.

In Utah, the Republican-majority legislature has passed a Medicaid expansion bill, something they wouldn’t be likely to do if they thought they’d be paying a price for it this fall. Social issues still carry a lot of weight in conservative states — Mississippi and Indiana have passed more restrictive abortion laws this year.

But the trend, in a year when Republicans will be facing challenges to their legislative majorities in 32 states, has been more pragmatic and less ideological. All 50 states have now passed laws requiring that their residents be notified with a specified time of data breaches involving their personal information, one way in which the states have begun to move past Washington as leaders in consumer issues.

This isn’t to say legislators have always been on their best behavior. The legislature in Alabama, which has been having a hard time keeping its politicians out of jail, has passed an ethics “reform” which sounds like an attempt to square the tables for the unethical. Not that they needed stricter guidelines, or anything. Late Monday, there was word the FBI has arrested another longtime Alabama legislator, the former chairman of the state Republican Party, and the CEO of a healthcare company in a bribery case.

All states are different, but it’s safe to say the biggest factor affecting the mood of legislators across the country this year has been the federal tax cut, delivered by Congress only weeks before many legislatures were gaveled into session. It gave lawmakers a windfall, but also the immediate job of adjusting state tax rates to reflect the changes.

And it was a foretelling of what’s ahead for state legislatures when the bill comes due for the massive hole blown into the federal deficit by the tax cut. House Speaker Paul Ryan has already targeted Medicare, Medicaid and federal poverty programs for reductions. That won’t go far this year, but state legislators who know what they’re doing have to realize that going forward they’re about to get the hard part of filling the hole. 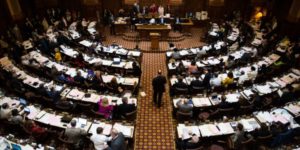 In a year when students marched around the country and in Washington for stricter gun laws, teachers have been marching on their state capitals in West Virginia, Kentucky, Arizona and Oklahoma. The teachers have made their voices heard: last week Oklahoma passed its first tax increase in 28 years so that teachers could get their first pay raise in a decade. Like Gov. Nathan Deal’s decision to fully fund Georgia’s K-12 education formula for the first time in a decade, this is a rollback from some of the most severe cuts made in the wake of the 2008 recession.

The wave of strikes are about the undervaluing of teachers generally, but inadequate health care plans have been a particularly galling concern. Frictions over the cost of care aren’t going to lessen over the next year. Behind the daily antics in Washington and what is becoming an increasingly volatile stock market, health care and how to pay for it remains government’s biggest problem, and nowhere more so than in the legislatures.

The struggle for control of Congress will be the focus of a tremendous amount of attention this midterm election year, but the future of both parties may rest in the races for state legislative seats. Perhaps that’s why the incumbents seem to be taking things just a little more seriously this year.