In north-central DeKalb County, my home is among thousands in the crosshairs of cityhood movements and proposed annexations. Count me among the otherwise sensible DeKalb County residents who rightly worry that a new city we’ve never heard of is going to take us over, or even worse, ignore us. 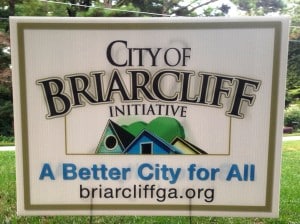 A yard sign promoting the city of Briarcliff. Prior to the incorporation movement Briarcliff was best known as a road.

No one wants to be an unincorporated island surrounded by cities. But lots of us are in a pickle. Our zip code (30033) is Decatur, but we’re not in the city proper, and it doesn’t want us anyway. If Atlanta, the city too busy to hate, doesn’t love our ranchburger vicinage, we’ll likely be scooped up by a municipality that does not exist yet, such as the proposed city of Briarcliff.

On one map it looks like a T-bone steak and shares the name of an insane asylum featured in the TV series American Horror Story. Just north of us, folks are similarly worried about takeovers by Tucker (not a city, just looks like one) and Lakeside (maybe you’ve heard the nickname “Fakeside”). The latest proposal is to merge Lakeside and Briarcliff into one two-headed creature.

Some of us would rather not go crazy over this.

In DeKalb County, the driving force behind these cityhood movements is the widespread belief that DeKalb County government and its school system are corrupt and incompetent. Can’t argue with that. But what I saw in a decade as an AJC reporter covering governments in DeKalb County and Gwinnett gave me a natural resistance to bandwagon movements, especially those that preach economic feasibility. The argument is: if re-aligning our neighborhoods into cities makes sense to our pocketbooks, why not vote yes?

Often these campaigns rely on research from places like the University of Georgia’s Carl Vinson Institute of Government. I remember how a Vinson study in 1997 helped boosters persuade DeKalb voters to pass a Homestead Option (HOST) penny-per-dollar sales tax hike. Based on the size of DeKalb County’s share of annual MARTA tax collections, the study predicted the tax would generate enough revenue to give homeowners a 100 percent homestead exemption on their property taxes, pay for $20 million in infrastructure improvements and provide a small tax cut for businesses.

The study didn’t take into account that a change in the state of Georgia’s computerized system of calculating revenue that was implemented the same day DeKalb’s HOST went into effect, would result in a steep drop in tax collections. County leaders scrambled. They still fulfilled the promised 100 percent homestead exemption for homeowners, but dropped the tax cut for businesses and slashed the amount of money set aside for infrastructure improvements. The money that the study concluded would be there simply wasn’t.

Despite what supporters of incorporation say, such proposals don’t always deliver what they promise.  In January, the city of Jurupa Valley, Calif., voted to begin disincorporation just three years after the city’s founding. Jurupa Valley is one of four new Riverside County cities, including Eastvale, Menifee and Wildomar,  that were saddled with huge debts and forced to slash services after Gov. Jerry Brown diverted state vehicle license fee revenue from local governments toward prison realignment. The cities had planned to use that money for incorporation.

Looking more broadly at the region and its history, I remain unconvinced that these new cities will be anything less than another layer of government with higher taxes, which will spend money for lawyers to wage border fights. I question whether these new cities will turn over the handling of applications for building permits, business licenses and court fine payments to private companies in other U.S. cities and abroad, as Sandy Springs did. In their craving for diversified tax bases, will they open more residential areas to commercial development?

Then there is the immense balkanization of Atlanta already. When we experience the next ice storm like the one that stranded thousands of metro Atlanta motorists on that horrible night last January, imagine even more local governments trying to coordinate disaster response. It will get harder, not easier.

But learning from history, and going forward with savvy expectations, are made even more unlikely because of the most volatile issue in this whole mess: race. The biggest critics of new or bigger cities in DeKalb say that this collective movement is part of a racist agenda to free affluent white enclaves from the control of majority black governments. Cityhood supporters have tended to react by plugging their ears and yelling,  “Na, na, na, na, na, na, na, na, na,na, Not listening! Not listening!” Race is such a dividing force that we ignore other political factors that would help us all be as informed as possible.

One of many maps of the proposed city of Lakeside. Lakeside, like Briarcliff, has no prior identity as a community of interest. It is known as a high school.

It’s also worth pointing out that these re-alignments are galvanizing as a major cleanup of unethical county leaders is well underway. When corruption indictments, trials or convictions end or suspend the careers of the county’s CEO, a commissioner, a school superintendent and a school chief operating officer, DeKalb County offers a fresh page of history. At this point, where can things go but up?

As the zeal to carve up our jurisdiction into multiple municipalities seemingly moves with all the fury of a splitting atom, I can’t help but wonder where it all ends. Will every subdivision have its own mayor and city council? Will neighborhoods inside these new or expanded cities begin to rebel when their local governments begin to let them down?

In the battle for hearts and minds, we’ve seen how rumors of cityhood and annexation have turned DeKalb residents into a bunch of perennial wallflowers panicking over a Sadie Hawkins dance. If this push won’t stop, let’s go for it.

I have in mind a city of my own. It lies just southeast of the VA Hospital and Clairmont Road on .56 acres, about half that when South Peachtree Creek rises. It is, more specifically, my house and the property attached to it.

Its five residents will enjoy enough municipal services to qualify as a city. It will have one orange hatchback designated for trash pickup and dumping at undisclosed locations at midnight on Saturdays. It will have its own zoning department to approve or deny, say, one young resident’s plan for a beekeeping operation within the city limits. Police services will be provided by the resident canine, a shepherd mix already on patrol. I call this imaginary city Suckatur.

It’s a ridiculous idea, isn’t it? But it points out where our current choices came from and where we are going: in DeKalb County, either we all hang together or we go our separate ways.

Ben Smith can be contacted at benzmyth@gmail.com.