In Decatur Sunday, over 100 people of all ages observed Indigenous Peoples Day at a rally calling for the removal of a monument from the Decatur Square – a cannon used in the U.S. war to remove the Creek Nation from Georgia. 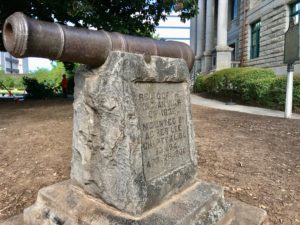 This cannon memorializes the U.S. victory over Creek Nation in 1836 and should be removed from the Decatur Square, a human rights group contends. Credit: Kelly Jordan

The group that gathered Sunday had wanted the cannon removed when DeKalb County complied with a court order to remove a Confederate monument from the square. That happened on June 18 – in an unheralded procedure just before midnight.

Like the Confederate monument, the cannon was placed near the historic DeKalb County Courthouse at the turn of the 20th century by the United Daughters of the Confederacy.

Unlike the Confederate monument, the cannon was not ordered removed from the courthouse grounds by DeKalb County Superior Court Judge Clarence Seeliger. Seeliger’s ruling addressed only the Confederate memorial, which city officials contended had become a threat to public safety amid the demonstrations related to the death of George Floyd while in police custody in Minneapolis.

The cannon memorializes expulsion of indigenous peoples following the Creek Indian War of 1836. According to a report by the National Park Service, the war was a consequence of the Indian Removal Act of 1830, which was staunchly supported by President Andrew Jackson. One passage of the report observes: 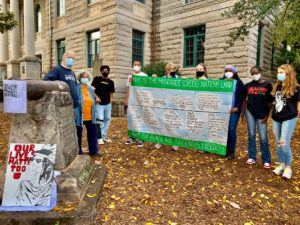 At an Indigenous Peoples Day commemoration Sunday in Decatur, advocates renewed their call to remove a cannon used in the war to drive Creek Nation from Georgia. Credit: Kelly Jordan

The Beacon Hill Black Alliance for Human Rights has been at the forefront of the effort to remove the cannon. Beacon Hill was established from a group convened by Elizabeth Wilson, then Decatur’s mayor and the first Black elected to the position. Wilson is listed as an “elder representative” to Beacon Hill on the organization’s website.

Beacon Hill sponsored a rally June 17 to, “demand removal of monuments to hate” at an event named, “Take it Down: No More Monuments to White Supremacy.”

The organization is sponsoring a petition on change.org a petition titled, “Removal of Genocidal Cannon in Decatur Square.” The petition has gathered 329 signatures of a goal of 500. The petition states, in full: 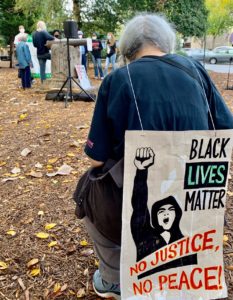 A dual message of support for Black Lives Matter and Indigenous Peoples Day was voiced Sunday in Decatur at an event sponsored by Beacon Hill Black Alliance for Human Rights. Credit: Kelly Jordan

One signature on the petition, posted Sunday and attributed to a woman in Decatur, commented, in full:

Another signature on Sunday, attributed to a woman in New Haven, Ct., commented, in full: 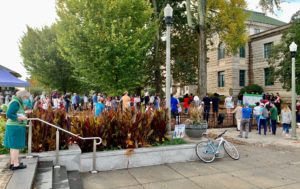