For the first time in 200 years, four tribal nations will come together to compete in an indigenous stickball tournament on traditional Muscogee Land in Atlanta this weekend. 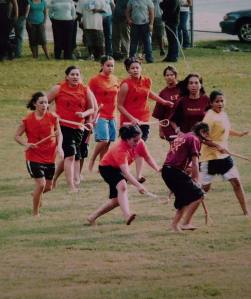 A game of indigenous stickball. Up until 2000, the sport was played by boys and men only. (Photo courtesy of Natalie Welch.)

Indigenous stickball is one of the oldest organized sports in America, dating to 1729, and holds great historical and cultural importance. Historically, the game has served as an alternative to war, a celebratory activity and type of recreation. Stickball is the precursor to lacrosse, with players using their sticks to advance the ball down the field and score goals.

The Southeast Woodlands Stickball Summit is on Saturday, Oct. 15 on the Atlanta BeltLine, organized by Atlanta BeltLine, Inc., Emory University and Chickasaw/Choctaw artist Addison Karl. The games will be hosted at the Historic Fourth Ward Activity Field along the BeltLine, which lies on the traditional homelands of the Muscogee and Cherokee Peoples.

Saturday’s event will begin with an opening ceremony by the Muscogee Nation, followed by three games and, lastly, a panel discussion about the history and cultural significance of the sport. Up to 60 players from the Eastern Band of Cherokee Nation, the Chickasaw Nation and the Mississippi Choctaw Nation will take the field between 10:45 a.m. and 3 p.m., each with a different variation of the sport.

“Atlanta is such a sport-loving community, they will embrace it with a whole heart,” said Miranda Kyle, Atlanta BeltLine Arts & Culture program manager. “It isn’t a typical sporting event.” 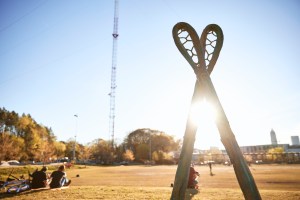 This is a story of coming together and the power of art. The summit was inspired by Karl’s Itti’ kapochcha to’li’, a six-foot-tall cast iron sculpture of stickball’s toli sticks that’s on display on the BeltLine’s Eastside Trail.

“The heart and soul of [the Stickball Summit] is [Karl’s] piece,” Kyle said. “We wanted to create an entire moment, a homecoming around what the sculpture represents.”

Karl’s artwork was inspired by his grandfather and his toli sticks that hung on his wall.

“I would stare and imagine these incredible games that our ancestors played based on the stories that my Grandfather told,” Karl wrote in an artist statement. “To think by creating this artwork, by inviting these four nations to join, I am somehow bringing that imagination alive. We are writing new stories now, based on thousands of years of stories that have been told.”

In addition to the three games, the Summit will also include a panel discussion at Emory’s Carlos Museum about the history and evolution of stickball. One of the six panelists is Natalie Welch, a sports management assistant professor at Seattle University. 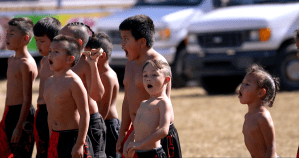 A scene from “She Carries On.” (Photo courtesy of Natalie Welch.)

Through her time learning about the sport and doing indigenous research, “a lot of men talked about how for them, playing stickball was a part of being a Cherokee man.”

Despite its significance, many people aren’t familiar with stickball and, holistically, Welch feels the greatest obstacle indigenous athletes face is lack of visibility.

“While a majority of natives now live in urban areas like Atlanta, they’re still really invisible,” Welch said. “I struggle a lot with the Atlanta Braves and the fact that our tribe supports them. There’s still a lot of ignorance around our people, everyone thinks of us historically and not in the present. I think that’s the biggest barrier for a lot of our people. We haven’t just survived, we’re thriving.”

This weekend’s tournament is a step in the right direction. Welch is most excited about the unity and community building that the Stickball Summit will offer, as a celebration between four tribal nations.

“[Native Nations] oftentimes stay siloed because we’re so focused on trying to take care of ourselves,” Welch said. “But I’m so excited to bring everyone together, show people that we’re still here and this is our land, we would still be here if it weren’t for all the things that had been done.”