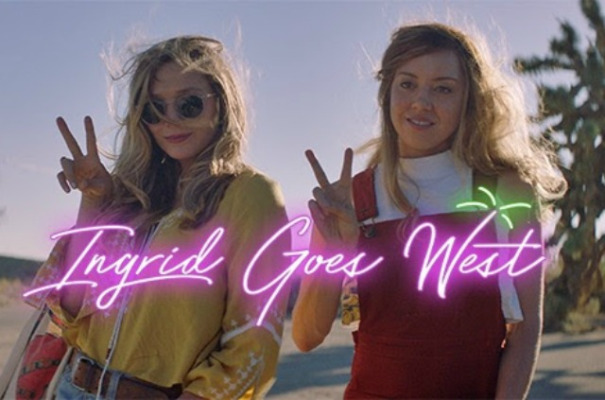 “Ingrid Goes West” is “All About Eve” for the Instagram era.
That’s not exactly a compliment. Or necessarily a put-down.  It’s merely an observation, with a soupcon of social sting.
In the Oscar-winning “All About Eve,” a young actress named Eve Harrington (Anne Baxter) insinuates herself into the life of an established Broadway star, Margo Channing (Bette Davis). Eve’s intentions are not honorable. 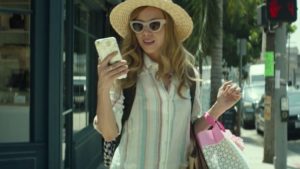 In “Ingrid Goes West,” a woman named Ingrid (Aubrey Plaza) insinuates herself into the life of a social media “influencer’ named Taylor Sloane (Elizabeth Olsen). Ingrid doesn’t want to supplant her; she just wants to become a part of her seemingly glamorous on-line life. To become integral to Taylor’s product placement, so to speak. (An influencer is someone who constantly posts about all the wonderful things she’s doing at this wonderful Brand-Name place, drinking this wonderful Brand-Name beverage, wearing these wonderful Brand-Name jeans.).
Both Eve and Ingrid are psychopaths. In fact, Eve is the more insidious of the two, but it’s Ingrid who is briefly sent to a mental hospital for cyber-stalking. It happens right at the beginning of the movie. We see Ingrid show up at a wedding, go up to the bride, then pepper spray her. We soon learn that Ingrid and the unfortunate bride have never met; the woman just happened to make a kind remark about one of Ingrid’s posts, which the lonely and unhinged Ingrid interprets as lasting friendship.
Released from the hospital, Ingrid returns home, scoops up the $60,000 she’s inherited from her recently deceased mom and, as the title says, goes west. Her new target is the shallow but essentially harmless Taylor who lives in L.A. with a bestubbled “sorta” artist named — what else? —  Ezra (Wyatt Russell). He, too, is shallow but essentially harmless.
Ingrid rents a place from Dan (O’Shea Jackson Jr. from “Straight Outta Compton”), a would-be screenwriter with a Batman fixation and manages to become Taylor’s new BFF. Well, at least for this week.
There are echoes here of “Single White Female” and, oddly enough, given Jerry Lewis’s recent passing, “The King of Comedy.”
But “Eve” is the movie “Ingrid” most closely approximates except…and this is why “Eve” will always be a classic and “Ingrid” will remain an interesting oddity. Bette Davis’s Margo is the real thing, an enormously talented performer with a body of work and a bevy of awards on her resume. Taylor is, at best, an approximate thing.  Aside from her energy and her sun-kissed good looks, there’s nothing especially creative or even fascinating about Taylor.  She’s a photogenic nothing, surfing on a sea of likes.  She is what she posts.
Filmmaker Matt Spicer is onto something here, something about what we aspire to pretend to be and what that “being” has become in the Banal New World of social media. And he’s got the vibe nailed: “Meet your new Girl Crush!” gushes an article on Taylor. 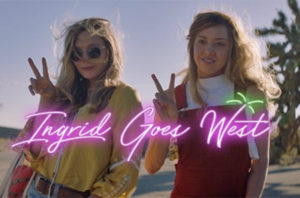 But his film too often sinks to the level of its subject. Ultimately, it, too, is essentially harmless and shallow.
Still many of his points are acutely made, and he’s gathered a stellar ensemble to put them across. Plaza has an offbeat charm, even when she’s being exceptionally creepy. Olsen virtually glows with, well, virtual charisma. And Jackson pulls off the near-impossible task of making film’s designated “ guy” someone we actually find, well, nice, not a patsy or a dope.
Decades ago in the Madonna documentary, “Truth or Dare,” the singer’s then-boyfriend, Warren Beatty, commented, “She doesn’t want to live off-camera much less talk. Why would you say something if it’s off-camera? What point is there to existing if it’s off-camera?”
“Ingrid Goes West” has some cogent things to say about being a struggling young …someone…struggling to be…a something… Maybe not so much “A Portrait of the Artist as a Young Man,” as “A Selfie of the Psycho as a Young Woman.”
To its credit, it almost works…until it doesn’t. But that doesn’t mean you shouldn’t give it a taste.
Share1
Tweet
Share
Pin
Pocket
WhatsApp
Buffer2
Email
Reddit
3 Shares
Tags: