Intuit + Mailchimp pledge to continue its support of the Atlanta community

Mailchimp, and its new owner, Intuit, held an afterparty in Atlanta Tuesday evening to reassure the local community that the technology company is not going anywhere.

Intuit, based in Mountain View, Calif., completed its $12 billion acquisition of Mailchimp on Nov. 1. 2021.

The invitation to the afterparty event, held at the Atlanta Contemporary Arts Center on Means Street, set the tone for how the company would operate under new ownership:

“Let’s come together over food, music and entertainment to introduce Intuit + Mailchimp as one team committed to Atlanta’s prosperity. We are excited to thank you for everything you do and kick start our future together as champions of Atlanta small businesses where we can deliver more together.” 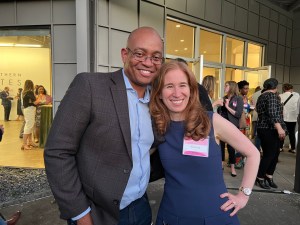 Sheldon Cummings, COO of Mailchimp, with Rania Succar, CEO of Mailchimp at the party on Sept. 20. (Photo by Maria Saporta.)

The afterparty also was an opportunity to present Mailchimp’s leadership to the Atlanta community — Rania Succar, CEO of Mailchimp; and Sheldon Cummings, the chief operating officer.

“I think this is the most inspiring event I’ve ever attended,” said Succar, who is spending half her time in Atlanta and half in California. During the event, Succar said she learned about the partnerships Mailchimp has had with the people in attendance. “Now I’m even more proud after hearing these stories,” she said.

Succar, who is of Syrian descent, also shared a personal story. She said the reason she joined Intuit seven years ago was because of its mission to empower prosperity around the world through its companies — TurboTax, QuickBooks, Mint and Credit Karma. She particularly has enjoyed helping small businesses solve cash flow issues and grow their companies.

Over the past decade, Succar also has built her own nonprofit focused on education “to ensure that we wouldn’t have a lost generation of Syrian youth. And so, we built this grassroots organization that has educated 10,000 people,” she said.

The event was meant to build on the foundation Mailchimp has built in Atlanta and help kick off the next chapter for Intuit + Mailchimp.

“We are so proud to bring Mailchimp into the Intuit family,” Succar said, adding the company can’t wait to accelerate “everything that MailChimp is doing. So, you’re going to see a lot more energy… We love the presence in Atlanta and the community that exists here. So, we’re going to continue and lean into that and hopefully you’ll just see the next chapter grow even further.” When Succar thanked Shakespeare for putting together the event, the audience gave a loud and extended cheer, seeming as a way of thanking him for connecting Mailchimp to Atlanta organizations.

“I’m really excited to be here,” said Cummings, who had served as Intuit’s chief diversity, equity and inclusion officer before becoming COO of Mailchimp. “We will continue the engagement and contribution with you.”

In a brief interview at the event, Cummings said he and his family moved to Atlanta about two months ago, and they live in the Chastain Park area.

As an example of Mailchimp’s continued commitment, Cummings said the company has had a partnership with Clayton State University, contributing about $300,000 a year. “We increased that to $1 million,” Cummings said. “Part of tonight is to say we showed up and participated before, and we will continue as we move forward.”

A native New Yorker, Cummings has lived in many places, including Switzerland, Chicago and California. 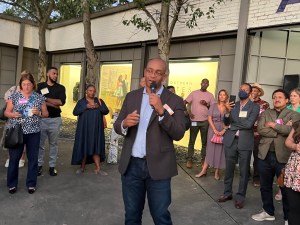 Mailchimp COO Sheldon Cummings talks to attendees of the afterparty at Atlanta Contemporary on Sept. 20. (Photo by Maria Saporta.)

“I’ve never lived in the South before,” said Cummings, who is looking forward to being more involved in the Atlanta community. “I know and respect what Atlanta has to offer. I think it has fantastic diversity. It’s culturally amazing. It’s a tech hub with great talent. I’m excited about what I can learn and experience here.”

Mailchimp was founded in Atlanta in 2001 by Ben Chestnut and Dan Kurzius — two experienced web designers. Eventually, Chestnut developed software to tap into email marketing to help clients reach customers through email. The founders were able to grow the company without amassing debt or taking on investors. Mailchimp relied on its increasing business model to grow the company through “bootstrapping.”

According to Wishpond.com, when Mailchimp was acquired by Intuit, it “was one of the fastest-growing businesses in the whole world.” It had revenue of about $800 million in 2020 and was expected to top $1 billion in 2021. At the time of acquisition, Mailchimp had 1,200 employees. That has now grown to more than 1,500 employees.

“Their bootstrapping approach paid off in a big way, leading up to the whopping $12 billion sale,” Wishpond.com wrote about a year ago. “This just shows you that it’s possible to build a massive tech company outside of Silicon Valley without any external funding. Atlanta is proud.”

Neither Chestnut nor Kurzius attended the afterparty event on Tuesday evening.