Invasive dove seen in Atlanta as Audubon counts 100-plus species

An invasive bird that is showing up in Atlanta traces its lineage to the Middle East. The Eurasian Collared-Dove made its way from the Bahamas to Florida in the 1970s and now is colonizing North America to the point that birds are spending the winter in Alaska, according to results of the annual Christmas Bird Count by the Atlanta Audubon Society. 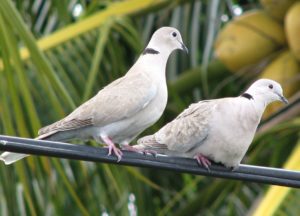 Spotted in Atlanta in December 2017, the Eurasian Collared-Dove is an invasive species that migrated from the Bahamas to Florida and now makes Alaska its home. Credit: projectfeederwatch.wordpress.com

In metro Atlanta, the Eurasian Collared-Dove made the list of “notable birds” reported by the group of 70 volunteers who spread out across intown Atlanta on Dec. 30, 2017 to count the number of species and birds they saw. Overall, volunteers counted some 40,500 individual birds representing more than 100 species.

The Eurasian Collared-Dove was not reported by other Audubon birders in the region, who were located in the Marietta, Peachtree City and Roswell areas.

The Atlanta team including the dove sighting in a description of, “hard-to-find-in-the-city birds.” Others that made the Atlanta list include the Wild Turkey, Wilson’s Snipe, American Kestrel, Eastern Meadowlark, Common Yellowthroat, and Peregrine Falcon.

Although the Eurasian Collared-Dove is an invasive species, it has not been identified as a threat to native species by the U.S. Fish and Wildlife Service. In fact, the FWS does not even track the harvest of the species. There is no bag limit on the species according to a 2014 report by denverpost.com, which quoted hunters describing the bird on a blog in these terms: “They are good eatin’. Better ‘n chicken.”

The Aububon’s Guide to North American Birds describes the species as a:

The species may even have a beneficial effect on native species, according to a report by Cornell University’s FeederWatch blog:

The Eurasian Collared-Dove wasn’t the only unusual bird to be spotted. And it was in a much broader flock spotted by a total of 159 volunteers who watched the skies as part of an Audubon tradition that dates to 1900.

That’s when ornithologist Frank Chapman, an early leader of the Aududon Society, proposed creating a holiday tradition of counting birds instead of hunting them.

“It was cold, but not nearly as rainy as in 2016 — thankfully, because it would have been snow! Our volunteers just put on an extra layer and counted the birds,” Belmonte said.

Here are results of the 2017 Christmas Bird Count in metro Atlanta:

Previous Article
Atlanta Jazz Festival to get $250,000 from city before first performer, event made public
Next Article
Mori Luggage & Gifts sold to a west coast company