Atlantan George Hirthler, who wrote the bid book that brought the 1996 Summer Olympic Games to Atlanta, today received one of the highest honors given by the International Olympic Committee (IOC) — the Pierre de Coubertin Medal — in a ceremony in Lausanne, Switzerland.

“It is very much a culmination for me,” Hirthler said in an interview before leaving for Lausanne. 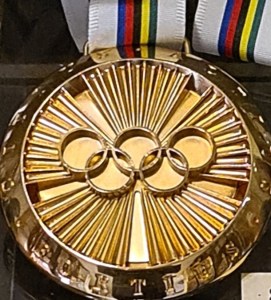 For the past 33 years, Hirthler has become one of the leading “Pierre de Coubertin specialists.” Hirthler has made it his life mission for Coubertin to become better recognized for his aspirations in launching the modern Olympic movement in 1896.

Hirthler first became acquainted with Coubertin in April 1989 shortly after he and designer Brad Copeland were selected to be the creative team for Atlanta’s Olympic bid.

They went to Lausanne, where they visited the Olympic Library to read all the bid books that cities had submitted in their quest to lure the Olympics Games.

Within 15 minutes of being in the library, Hirthler read a bid book that stopped him in his tracks.

“There was a picture of this old man with a mustache,” said Hirthler of his first encounter with Coubertin and his vision for the Olympic Games. “He wanted to unite the world in friendship and peace through sport. The word ‘peace’ jumped off that page. I realized the Olympics isn’t just an event. It’s a movement. From that moment on, I was all in.”

Hirthler, an antiwar protester in the 1960s, soon became a man with a mission to get to know the founder of the modern Olympic Games and share Coubertin’s messages with the rest of the world.

“It made me wonder why Pierre de Coubertin wasn’t more widely recognized,” he said. “I felt compelled to tell his story.”

It’s hard to list all the ways Hirthler has helped elevate the teachings of Coubertin. 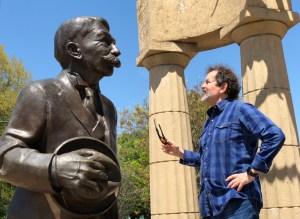 During his first visit to Lausanne, Hirthler began a detailed study of the Coubertin’s life. In 1993, Hirthler founded the U.S. Pierre de Coubertin Committee, which raised $500,000 to commission and install a statue of Coubertin at Centennial Olympic Park. Under Hirthler’s direction, the committee also translated 700 pages of Coubertin’s writings into English for the first time. That eventually was published by the IOC in the book called “Olympism” in 2000.

In 2016, Hirthler published a historical novel based on Coubertin’s life — “The Idealist: The Story of Baron Pierre de Coubertin.” The book dramatized milestones in the founding of the Games. The film rights to the novel were acquired by Oscar-nominated film producer, Mark Mitten in 2019, and the following year were purchased by a major motion picture studio, with details to be announced later in 2022.

Then in 2018, Hirthler published a daily commentary on 365 of Coubertin’s most inspiring quotes, creating a social media website — Coubertin Speaks — making his teachings accessible to anyone. The daily postings of quotes are currently translated into Chinese, Portuguese and Spanish and are being shared throughout the Americas.

At one point, Hirthler gave IOC President Thomas Bach a copy of “The Idealist.” 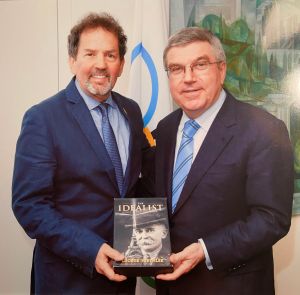 On July 15, 2020, Hirthler was on his exercise bike when he got an email from Bach that read:

“It is with great pleasure that I inform you that the IOC Executive Board, which took place today, has awarded you with the Pierre de Coubertin Medal for your outstanding services to the Olympics Movement.”

“I was thrilled,” Hirthler said. “My suspicion was that he had just finished reading my novel.”

Although he knew nearly two years ago that he would be getting the medal, the COVID pandemic prevented him from going to Lausanne to receive it — until now.

Bach wrote in a statement about Hirthler and his work.

“George Hirthler has put his creative skills at the service of the Olympic Movement for more than 30 years, and never more so than in “The Idealist,” his inspiring fictionalized biography of our founder, Pierre de Coubertin,” Bach wrote. “Even in fictional form, “The Idealist” captures faithfully Coubertin’s humanity and spirit. George’s work brings Coubertin to life and illustrates his genius, and this medal reflects George’s considerable contributions to our work and to keeping alive our founder’s legacy.”

The Pierre de Coubertin Medal, founded in 1997, is awarded by the IOC to educators, writers, sports executives, cultural figures, corporate leaders and others, including Olympic family members, who exemplify the Olympic spirit and its ideals through exceptional service to the Olympic Movement.

While Hirthler was embarking on his historical Olympics journey, he also made the Olympics a cornerstone of his career following his success with the Atlanta bid. 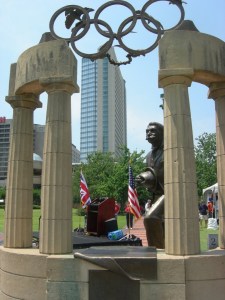 Statue of Pierre de Coubertin in Centennial Olympic Park – it was one of the most photographed spots during the 1996 Games. (Photo by Maria Saporta.)

Hirthler is not finished.

In 2020, he formed Atlanta Story Partners, a documentary production company in partnership with distinguished filmmaker, Bob Judson. They are just now restarting production of a feature documentary called “The Games in Black & White,” a comprehensive look at the 1996 Games featuring the relationship between Payne and Young.

Hirthler also is working on a nonfiction biography of Coubertin, a story that he hopes to produce as a new feature-length documentary. He hopes the new biography will be published before the 2024 Summer Olympics in Paris. The last Olympics overseen by Coubertin was during the 1924 Olympics in Paris — another centennial moment.

So why does he continue this mission to spread the Coubertin gospel?

“Every day, we read about division, and here is a guy who articulated an idea about uniting humanity,” Hirthler said. “I’m hoping that in the years I have left to be able to celebrate in an even broader way the values, the promise and the potential of the Olympic movement in the world.”