Isakson: A common thread in conservation of right whales off Georgia’s coast 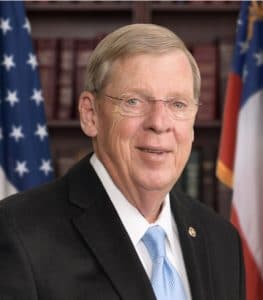 Sen. Johnny Isakson is the common thread between the two measures. Isakson retires from the Senate at the end of this month.

Isakson made a point about the right whales being special in Georgia when he co-sponsored federal legislation to provide $50 million, over 10 years, to help conserve endangered right whales. Isakson recalled legislation in the Georgia General Assembly, in 1985, when he said in a statement:

Kemp’s office didn’t make a fuss when the governor signed the proclamation, on Dec. 3. There doesn’t appear to be a statement, as typically is the case at such times. That means there’s no acknowledgement of Isakson’s apparent fondness for the gentle creatures as contributing in anyway to Kemp’s proclamation.

Further, wording in the resolution puts the governor firmly in support of right whales off Georgia’s coast. It reaffirms Kemp’s stated opposition to President Trump’s initial proposal to allow testing and drilling for oil off Georgia’s coast, and with it the seismic testing that’s been shown to endanger right whales and other seagoing creatures. 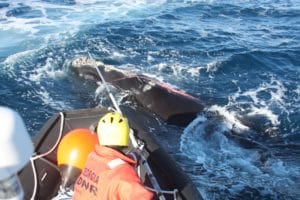 On Feb. 13, 2011, a state biologist prepares to cut a monofilament fishing net that was entangled in the mouth of right whale No. 3760. The rescue was attempted 20 miles east of St. Simons Island. Credit: Georgia Department of Natural Resources, NOAA permit #932-1905

The 1985 legislation reminds of the rapid trajectory of Georgia’s awareness of marine life. Just 34 years ago, a single generation, the presence of right whales off Georgia’s coast was viewed as a marvel to be protected. Now, environmental advocates have gathered to protect waterways flowing into Georgia’s coastal waters and, just in October, saw Mission Blue dedicate the Hope Spot marine conservation area.

Georgia in 1985 enacted two measures related to right whales: Georgia declared February 1985 as Whale Month and commended those who helped discover the presence of whales; Georgia named the right whale as the state marine mammal. 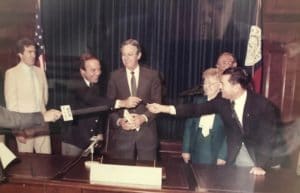 The resolution approved by the state House and Senate that declares the right whale as the state marine mammal reads: 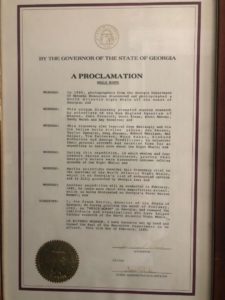 Georgia declared February 1985 as Whale Month to recognize the effort that located right whales off Georgia’s coast. Special to SaportaReport