It may not be broken, new report says of the way needy, rural Georgians are transported to critical destinations

Georgia has a new idea about how to contain the state’s burgeoning cost of transporting the poor, elderly and disabled in rural counties: Improve the existing system. 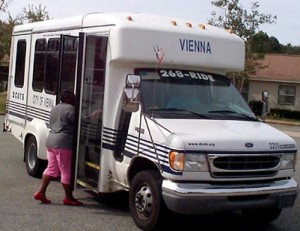 The Dooly-Crisp United Transportation System was cited in a USDA report as a successful transport program for needy and elderly residents. Credit: USDA

Initially, state officials were leaning toward a recommendation that Georgia consolidate the management and delivery of rural transport services. The new proposal suggests better management of the existing system, while continuing to examine the concept of bundled services.

The new plan will be available for public review shortly on the GRTA website. After the public comment phase, the final plan that includes public comment is slated to be adopted Aug. 14 by the Governor’s Development Council, which is the same board that oversees GRTA.

The final plan is due to the state Office of Planning and Budget by Sept. 1. OPB is to deliver its report to state lawmakers in January 2014.

David Cassell, GRTA’s program manager, has been working on the rural transport project for more than two years as part of his work at GRTA. He’s overseen analyses of how other states manage their programs in hopes of finding systems that would work well in Georgia.

All the initial indicators pointed toward significant cost savings through the bundling of services. 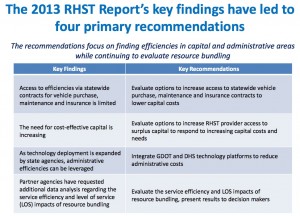 Click on the graphic to see a larger version. Credit: Governor’s Development Council

Services now are provided by the state Department of Transportation, Department of Human Services, and the Department of Community Health. This is thought to be an expensive system and costs are expected to grow substantially. More than two thirds of the cost, or 68 percent, is paid by the federal government, while state funds are used to match the federal dollars.

Cassell’s research has shown the number of Georgians who will rely on transport services to reach critical destinations is rising faster than the general population. Based on demographic projections, the cost of providing services in the existing fashion are forecast to rise by 31 percent by 2030 – from $142.3 million in FY 2012 to $187.6 million in FY 2030. That cost projection for 2030 is less than the $223 million that was cited in a report last year, but still represents a significant increase over current costs.

This outcome represents an evolution over the past few years.

In 2011, bundling appeared to be the panacea. One idea called for a network of regional managers to oversee programs in several counties. The regional managers would report to a statewide manager, who would ensure consistency in practices.

In 2012, bundling remained the likely recommendation after reviews of states including Florida and North Carolina showed the potential savings Georgia could reach through the format.