Georgia family with 14 children gives back through basketball fundraiser 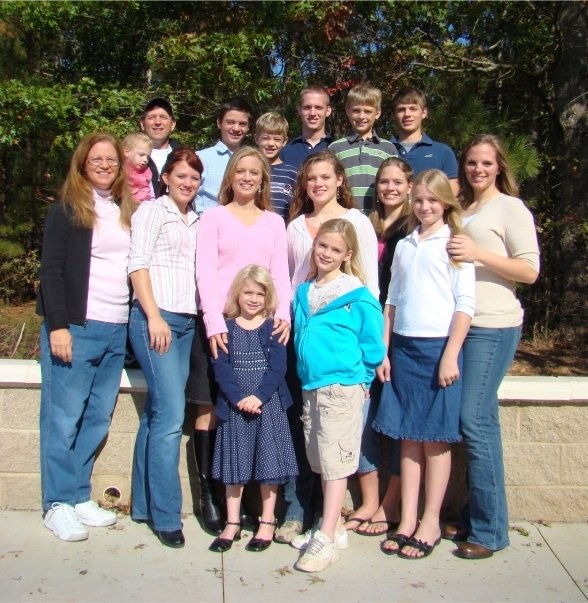 There are 14 biological children -- and no multiples -- in the Wexel Family of LIlburn, with mother Laurie (left) and father Daniel (back left)

Around Lilburn, the Wexel family is well-known for their 14 children – born one at a time to mom Laurie and dad Daniel. When he suffered a traumatic brain injury 11 years ago when a post fell on his head, she put her mind to finding support – and her search led to a fun and funny fundraiser this weekend. 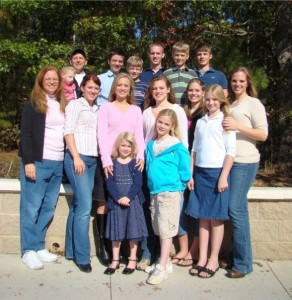 There are 14 biological children — and no multiples — in the Wexel Family of LIlburn, with mother Laurie (left) and father Daniel (back left)

For $10 a ticket (online at www.sidebysideclubhouse.org or at the door) on Saturday at 7 pm at St. Pius X Catholic High School gymnasium, you can see a team of local lawyers show up on a different court against a squad of Atlanta doctors with a prescription for winning.

The game, billed as “Jawbones vs. Sawbones,” will be played the weekend before the ACC college basketball tournament in Philips Arena. March Madness kicks off with a bit of March Malpractice.

“I hope their cardiologist brings his paddles,” one lawyer joked in an email.

The proceeds benefit Side by Side Clubhouse, a day program for people who have experienced traumatic brain injury – a population that has swelled with returning troops. Brain injuries have also become more publicized through athletic concussions.

“A lot of times you can’t tell that someone has fallen off a ladder or gotten banged up in a game,” said WXIA-TV sports anchor Fred Kalil, who as a brain tumor survivor will appear in a video at halftime of the fundraising game. “For me, even after 11 years, every day is a ‘new normal.’ ” 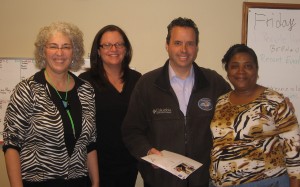 WXIA-TV sports anchor Fred Kalil, a survivor of a brain tumor in 2000, supports the Side by Side Clubhouse, which serves people who have experienced traumatic brain injuries. From left, Clubhouse executive director Cindi Johnson, Laurie Wexel and a clubhouse member. (Photo courtesy of Laurie Wexel).

More than raising money, this event shows the ripple of impact set off when neighbors – on a basketball team, in a community, in a courtroom or hospital – step up and serve. It’s about how people form teams and make key assists for the quiet cornerstones of our families and society – those who are caregivers.

The Wexels were partners in caregiving until Dan’s accident. Starting 10 months after they married in their mid-20s, they birthed and raised nine girls and five boys. With 14 kids, they were one shy of fielding three Wexel basketball teams.

“Consistency and being a united front,” Laurie Wexel said about their priorities as parents. “Being in sync has been the key for us.”

When Dan Wexel had his mild traumatic brain injury (MTBI), the family suddenly had to take care of him and themselves. Nothing was ever the same, even though from the outside, everything looked unchanged.

“If you met my husband, you’d never know he had a traumatic brain injury,” Wexel said. “He still has short term memory issues, and the accident made him dyslexic. It affected his sense of taste and smell, and he has chronic headaches…. He’s always been entrepreneurial and owned his own business, but now he’s no longer able to work.” 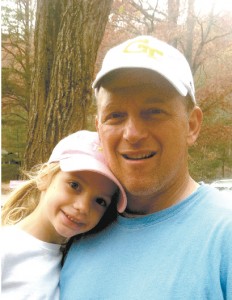 Daniel Wexel with his youngest daughter (Family photo). The father of 14 suffered a mild traumatic brain injury 11 years ago which left him unable to work.

Their neighbors in Lilburn pitched in with food, gift cards and other assistance. In nearby Stone Mountain, the Wexels found a place Dan could go each weekday – Side by Side, which offers vocational rehab and other services for adults with brain injuries. Only 25 places like this exist worldwide.

“The biggest thing for him as a high achiever was to acknowledge his new limitations, to embrace those and concentrate on his strengths more than his deficits,” said Laurie Wexel, 53. “That is a huge part of what goes on at Side by Side.”

Grateful for what they had received, the Wexels pitched in at Side by Side. Laurie also joined the GFWC Lilburn Woman’s Club, a civic group that works in many ways to build a stronger community.

As she assumed the presidency of that club, she also found out that Side by Side wanted to raise funds and awareness through a signature event. “Let’s put our heads together,” Laurie Wexel said to her club, and out of the brainstorming came Jawbones v. Sawbones, named and patterned after a similar event in Augusta.

At this point, she contacted Terry Ingwersen of the nearby GWFC Stone Mountain Woman’s Club, which meets near and also supports Side by Side. The two clubs agreed to a collaborative promotion of the basketball game. Helping brain-injured people helps their family members, too, because caregiving is so demanding. 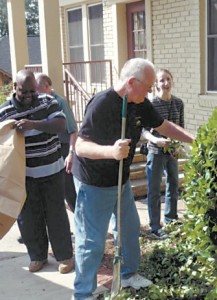 The Jawbones vs. Sawbones basketball fundraiser helps people like Dave Hess, who survived a brain aneurysm in early 2011. Hess found support at Side by Side Clubhouse, which serves people who have suffered brain injuries. (Photo courtesy of Side by Side)

In January 2011, Stone Mountain club member Barb Hess had gotten a life-changing phone call. On a business trip to Chicago, her husband Dave had suffered an aneurysm. “His neurosurgeon told us that [he] had suffered a dissecting aneurysm at the base of his brain, and he never had a patient survive,” Barb Hess wrote later. “It was a day-to-day watch.”

He returned home after months of hospitalization and treatment, needing more than she could give. “We have friends who would come visit and help with various complications… but Dave still needed something more,” his wife said.

Side by Side became an important resource for them as he recovered long-term memory and physical skills. The woman’s club was a huge support for her. The Hesses were surrounded with comfort and community.

“I am constantly sending out messages for prayer, and a long list of them went out for Dave Hess,” said Pat Sartain of the Stone Mountain club.

Sartain, in turn, was volunteering because the club had helped her, too. She had joined in 1994 after retiring, just as her mother, suffering with dementia, moved in with her.

“I became ‘cheer chairman’ for the club because it was something I could do on the computer even when I couldn’t participate outside my home,” Sartain said.

Their stories of getting and giving help show the ripple of meaningful gestures that foster strong community. They embody the mission of the General Federation of Women’s Clubs (GFWC), which was founded in 1890 as one of the largest and oldest nonpartisan, nondenominational women’s volunteer service groups.

Trash talk has already been flying before Saturday’s fundraising basketball game between lawyers (“Jawbones”) and doctors (“Sawbones”). Proceeds benefit the Side by Side Clubhouse, which serves people who have experienced brain injuries.

According to its website, GFWC “includes more than 100,000 members in affiliated clubs in every state and more than a dozen countries [who] work in their own communities to support the arts, preserve natural resources, advance education, promote healthy lifestyles, encourage civic involvement, and work toward world peace and understanding.”

Sartain, a native of Stone Mountain, pointed out that “the name and notion of a woman’s club may be old-fashioned, but the things we do in support of what is good, both in our area and internationally, is relevant and important today.”

The basketball game will showcase some lawyers who specialize in workers comp, and advocate for fair settlements for those who were brain injured on the job or by negligence. These lawyers will take on doctors who know how to dribble as well as perform brain surgery.

The proceeds will help Side by Side possibly double the 50 people served currently each month. More importantly, Jawbones v. Sawbones creates awareness of community backbone. Laurie Wexel described the ultimate give-and-go play : “I want to bless others the way I have been blessed.”