Jeff Galloway: For health and success, schedule frequent breaks — and there’s an app for that 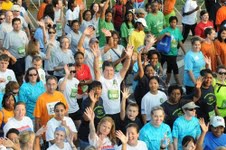 Walkers in the Kaiser Permanente 5K event, scheduled Thursday at 7 pm. Downtown streets will be blocked off.

Traffic alert: On Thursday at 7 pm, 16,000 people will run and walk 3.1 miles of closed streets in downtown Atlanta.

Productivity alert: They’re following (whether they know it or not) an Atlanta guru who preaches that getting ahead depends on making frequent stops.

But the growth of this event paralleled that of Galloway’s path from elite runner to widely traveled motivational speaker and corporate coach.

After the 1972 Olympics and winning the first Peachtree Road Races, Galloway’s reach and impact widened as he focused on the deceptively simple key to running and achieving any long-range goal.

“There’s a lot of burnout and breakdowns because people are not designed to run continuously,” Galloway said. “People hit walls, and they need a catalyst that will help them breakthrough to do, even in their 70s and 80s, what they never thought was possible.”

As a schoolboy required to join a sports program at Westminster Schools, Jeff Galloway joined the cross-country team, expecting to walk in the woods out of the coach’s sight. The team turned him from reluctant jock to Olympian and motivational guru who gets people moving through the use of frequent short breaks.

His core belief in the power of rest was no gimmick; it was like a seed or flame that grew bigger and stronger over time, and applied to more than road mileage. (His methods even recently made it to the App Store – but pause that thought while we cover the basics.)

To keep going, change the pace

Rest, Galloway preaches, is a key to achieving any goal. You must care of yourself along the way. At 67, he is literally walking the talk as he recovers from his only major injury, a hip fracture suffered not in running but of a misstep at home.

His belief in his message – and his charisma as arguably one of Atlanta’s all-time extroverts — pushed Galloway’s career past his elite running peers. He went on to motivate thousands of couch potatoes and others whose lives were stuck on “pause.”

“We want to take the excuses away,” he said in a recent interview after his return from a marathon in Alaska, which he completed with a pattern of alternating running and walking every 15 to 20 seconds. He cut an hour off his previous marathon time, his first after the hip fracture. This concept is so much a part of his identity that his email address starts with “runwalkrun.”

The Galloway pacing challenges the Protestant work ethic that persists in our idioms, clichés and daily decisions: being as busy as a bee, keeping one’s nose is to the grindstone, completing each rung of the ladder, because surely there is no rest for the weary.

For Galloway, success is more turtle, less hare – especially given our country’s crisis of obesity and diabetes. His followers trust that the Galloway way is the best way forward to the finish line.

Stan Zaslau of Pittsburgh, whose goal is to run a marathon and half-marathon in every state, credits Galloway with helping him get to 12 states without an injury (and 36 states for half-marathons). Frequent breaks help his body recover, so he can move faster during the running intervals. Slowing down is the only way for him to keep up healthy running and a busy practice as a urologist.

“I feel much stronger and cover more distance,” said Zaslau, 46, in a phone interview about his frequent walk breaks. 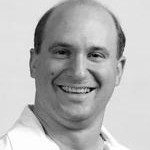 The Galloway philosophy of using frequent short breaks en route to success has spread far and wide through his book on running, smartphone apps and “e-coaching” on the Internet. Marathon runner Stan Zaslau, a urologist in Pittsburgh, credits Galloway’s app and e-coaching with helping him progress to running a marathon and half-marathon in every state.

From May to July, he finished three marathons, including one alongside Galloway in Montana.

“I’m a professional who likes to run marathons, which can be painful. Injuries are not pleasurable. I don’t want to beat myself up through running, and I don’t want it to break me apart. This method allows me to run and recover, and be a husband and father.”

Would this simple idea be as effective with a different messenger? Take away Galloway’s persona and chirpy Georgia twang, and would people accept the advice to slow down and let others pass them?

“That’s a tough question,” Zaslau said. “If it was anyone else but Jeff, it would all depend on how much you believe in that person. If you didn’t identify with him, you wouldn’t take him as seriously. With the app, I hear him as if he is right there with me.

After years of trial and error, Galloway now stars on three apps that use smart phone technology for pacing. Gone are the days of multiple watches and wrist-monitoring. The Easy 5K With Galloway program ($3.99) features Galloway’s tips and encouragement along your route (same price for the 10K format; $14.99 for the half-marathon version).

As a bonus, your own music can play when he’s not talking, and the app syncs the music to your walk or run pace. A GPS feature indicates how far you have traveled.

Now one of the most popular fitness options in the App Store, Galloway’s apps are still getting some of the kinks are still getting worked out. Positive reviewers say that this technology is doing what Galloway has always done: take away the excuses. 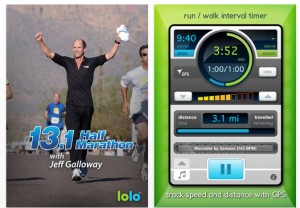 Atlanta running guru Jeff Galloway’s latest platform is a $3.99 smart phone app for training for a 5K (or 10K). He has helped people get moving and stay injury free through the use of frequent short breaks. His half-marathon app is $14.99.

“I am an almost 44-year-old, 100-pound overweight woman who never expected to run anywhere without being set on fire,” wrote one online reviewer on Aug. 8. “I always quit any workout program, but I think I will stick to this one [for] the very gentle push it gives me.”

Pausing in the work day

Outside of running, other Atlantans have discovered the power of a personal time butler. Interlude is one app that will interrupt you at a given time and remind you to slow down; another is called Pauses.

Shira Miller, who runs her eponymous public relations firm, blogs at The Lighter Perspective and is writing a funny book about life after losing 50 pounds (eliminating Oreos as her primary food group) a decade ago, uses the 5-Minute Meditation app to help her keep going by making her stop.

“When I was interviewing a local nutrition expert, Cheryl Howlin, for my book, she said that often people ate too much when their minds were full and short meditations like this were good for mental health,” Miller said. “So I decided to try it for overall performance in work and other habits, and found it works.”

Miller describes herself as a survivor of divorce, career changes, parental death, economic nosedives “and the resurgence of shoulder pads,” all of which taught her that  no matter what challenges arise, people can overcome them with a positive attitude, determination and a sense of humor. 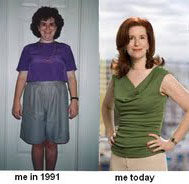 Shira Miller used short work breaks to aid in achieving goals, such as losing 50 pounds. She is a public relations communications professional in Atlanta and a lifestyle blogger.

Each day, Miller uses the meditation app to keep her philosophy from getting lost in every day static. The app helps her  “clear out the chaos, get refreshed and focused,” she said. “That little break has been making a world of difference; I instantly feel refreshed and my productivity skyrockets.”

Fittingly, Galloway’s app is rooted in a running career that only got going because he figured he’d take a powder. He was a lazy 8th grader forced, as were all Westminster students, to pick an afterschool physical activity.

“I heard that I only had to jog 200 yards up the trail and in the woods, the coach couldn’t see me walk,” said Galloway, whose fate changed when older runners began coaching him. As moving his body changed his life, he wanted others to experience the same transformation. His blog is subtitled, “Running and Walking Until You’re 100.”

In our interview, Galloway finally paused from his rapid, excited pace of conversation. Does he use the app to coach himself? Because who better to tell Galloway to slow down than Galloway himself?

“I do listen to myself, but I love the free form of running,” he said. “I have the ability to put myself on cruise control, to get into my right frontal lobe, and that just restores me and I just feel so much better. I like to let my internal equipment engineer the circuits in my brain.”

That inner wiring tells him what he preaches to others:  the only way to push through is to frequently stop pushing at all.