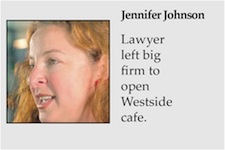 Had Jennifer Johnson not spotted an advertisement seeking restaurant franchisees while sitting in a café with her weekly book club in the early 2000s, Atlanta may be missing out on two delicious dining establishments: West Egg Café and The General Muir. A six-year associate at King & Spalding law firm at the time, Jennifer had always dreamed of working in the hospitality industry. Seeing the flyer in the window reignited that flame of passion and ultimately propelled her to make a dramatic career transition.

“I started to think back to the dreams I had and the things that really fueled me creatively when I was younger,” Jennifer recalled in our accompanying HD Moments video.

Those dreams were to provide great customer service and to pursue her interest in urban planning. Jennifer thought she could mix the two together and achieve both by developing a comfortable and inviting community-gathering space – the type of place she used to seek out as a college student.

Jennifer was working hard in her position at King & Spalding before her Moment, but felt she hadn’t discovered her “highest and best use” in life. The Moment she saw the advertisement displayed in the window ultimately gave her the courage she needed to take a risk to leave the security of her job to work in an area where she believed her talents would better serve the community. With that courage she picked up the phone, dialed the number, and jumped head first into the restaurant franchising business, leaving the legal field behind.

After working as a franchisee for a year, Jennifer realized there were some developing communities in Atlanta with great potential that were underserved by restaurants – one of those areas being the ever-blossoming Westside around Howell Mill Road. She decided to venture out and open her own restaurant, West Egg Café, on that side of town in 2004. The café is named after the new-money neighborhood in F. Scott Fitzgerald’s novel “The Great Gatsby.”

When the new restaurant first began serving customers, there were just five employees. Jennifer remembers staying from open to close to ensure operations ran smoothly during that crucial launching period. Demonstrating her commitment, she would stay late and make banana bread and muffin batter for the following morning.

Seven years after opening its doors to the public, West Egg Café relocated a few doors down Howell Mill Road to a bigger location in the White Provisions development, where the restaurant is currently located. The bustling business now employs 50 people.

“We have an incredible staff,” Jennifer said. “They keep me young and being around them is a great energy.”

Jennifer and husband/business partner Ben Johnson (who also left his position as a lawyer to enter the family’s restaurant business) recently opened The General Muir on the opposite side of Atlanta with partners Shelley Sweet and Todd Ginsberg. The Johnson’s were approached a couple years ago to open “East Egg Café” on that side of town, but decided instead to take a risk on a concept they’d contemplated trying for years. It would have been a safe bet to recreate West Egg and plant it on the east side, but the prospect of introducing a new dining experience to the city proved too exciting an opportunity to turn down.

They love the “hunting and gathering” side of conceptualizing and building an idea from the ground up. “Part of the thrill for us is the creative aspect of it,” Jennifer said.

The General Muir opened in January 2013 at Emory Point, a new retail and residential development directly across from the Centers for Disease Control. The restaurant is a gourmet take on a not-so-typical New York Jewish deli, named after the ship that brought Jennifer’s mother and grandparents, all holocaust survivors, to New York in 1949.

Jennifer’s dramatic career jump from practicing law to opening her own café came with very different responsibilities, but proved to be just as challenging and exciting.
“It is never the same thing every day. You are always faced with new challenges,” she said. “It’s very lively. You really feel like you are part of a vibrant community.

“Looking back, the day that I sat down with my book club members in that café and noticed that sign and made the call: that was my Moment,” Jennifer said. 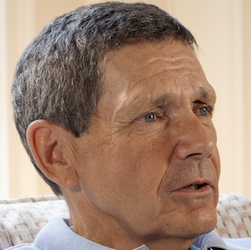 Next week in Moments’ Finale: Jay Smith, former AJC publisher, who learned a management lesson for life as a young reporter after he learned his father was diagnosed with terminal cancer.