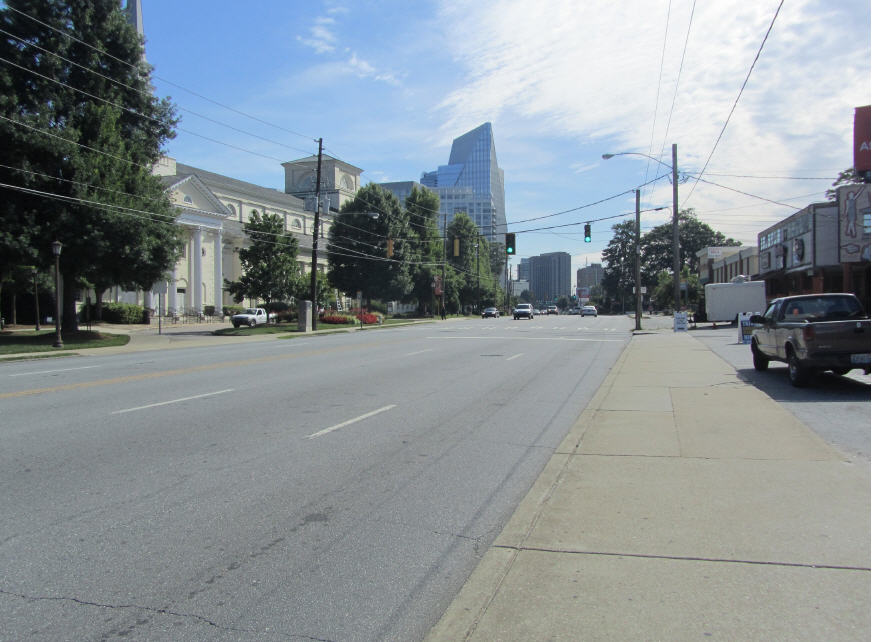 “Peachtree Road – The Facts, and Nothing But the Facts”

I thought the points he made were so important that I needed to post it right away.

Thank you for reading and for being engaged in our community.

“Peachtree Road – The Facts, and Nothing But the Facts”

What began as an opportunity to improve the Peachtree corridor has devolved into a highly politicized referendum on cars versus bicycles.

Emails have been forwarded to me, written by people encouraging neighbors to oppose the Georgia Department of Transportation’s recommended alternative, that have been filled with misinformation, mistrust, fear and anger.

Many of those with whom I have spoken about the plan to restripe Peachtree have asked me to provide factual information about the proposal to compare with what they have been hearing from their neighbors. This post will do just that – give the reader good information upon which to base an opinion. 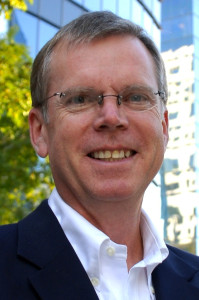 Peachtree, between Deering Road just north of Midtown Atlanta and Pharr Road in Buckhead, is an extremely inefficient road in terms of utilization of the available capacity and processing of traffic.

How does this inefficiency manifest itself?

Georgia DOT has monitored existing conditions and determined that there is only 15 percent use of the far left lane. Why is this? Because there are very few center left turn bays to allow people who wish to turn left off of Peachtree to get out of the far left lane so that others can continue straight ahead.

And there are very few traffic signals that give left-turning vehicles a green arrow. So most people avoid the far left lane because they don’t want to get stuck behind someone who wants to turn left, but has to wait for three lanes of oncoming traffic to clear.

Why is this a problem? Weaving is the biggest result, where cars are darting in and out of lanes to try to take advantage of a mostly empty far left lane or to get out of that lane to avoid a stopped car because someone is trying to turn left.

Because of this weaving, acceleration and deceleration, there have been many crashes – 801 in the past five years, according to Georgia DOT’s complete records. This is not a safe corridor. Nor is it a reliable corridor, in terms of being able to count on how long it should take you to get from one point to another.

If you can improve safety by reducing crashes, not only does the public benefit from reduced damage to person and property, the public also benefits from decreased congestion due to crash incidents. Restriping Peachtree to provide a center left turn lane and left turn arrows on traffic signals where turning volumes warrant them is the best way to improve safety, as well as corridor reliability on Peachtree.

OK, so why not widen Peachtree to add a center turn lane and be done with it? Because to do so would require severe property impacts, above ground and below ground utility relocations, and it would have environmental impacts that, combined, make this option a non-starter. So whatever will be done will have to take place between the existing curbs as they are today.

The predominant lane configuration that is on this stretch of Peachtree today is three 10-foot lanes in each direction – 60 feet from curb to curb. If 60 feet is what you have to work with, and you begin with the goal of having a center turn lane, you don’t have room to put back three lanes in each direction. The question now becomes what to put back on either side of the center turn lane.

As mentioned earlier, Georgia DOT monitored existing conditions, which included doing what is called traffic counts – how many cars travel in what direction during specific times of day and days of the week. They then looked at developments proposed and under construction along the corridor and just off of the corridor in Buckhead and estimated additional future traffic from those developments.

They then added additional future traffic from regional growth. They input all of these traffic data into a sophisticated computer traffic model in order to simulate traffic operations performance for different lane configurations. 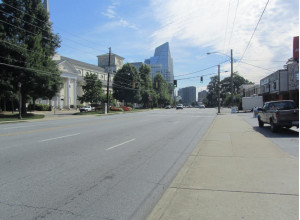 Georgia DOT modelled how traffic operations would perform under these various scenarios, in terms of travel time, delay at intersections and vehicle throughput (number of vehicles road could handle). They compared the results and weighed the relative benefits against their stated goals for the project: safety, traffic operations, and pedestrian and bicyclist safety and access (especially to the BeltLine, which will cross Peachtree north of Piedmont Hospital).

What are the benefits of adopting this alternative?

Vehicle traffic operations performance is maintained in the corridor for the foreseeable future. In fact, Georgia DOT anticipates that the restriped road will be able to handle up to 10,000 more vehicles per day and that delays at intersections and travel times will improve for the corridor as a whole, especially in the afternoons.

Traffic flow will be better regulated than it is today. Crashes will be reduced (Georgia DOT expects a 20 percent reduction). Bicyclists will have dedicated and safer spaces with access to the future BeltLine. Where the bike lanes are present they provide an effective four-foot buffer between pedestrians and vehicles, and a reduced crossing distance for pedestrians.

I know it is counterintuitive that traffic operations will be improved by removing a lane or two, but when you consider 15 percent utilization of both inner lanes and the lack of a center turn lane as well as a reduction in crash incidents, it makes sense.

Did Georgia DOT consider that MARTA has the 110 bus that operates in this corridor? Yes.

Would motorists have to be careful not to hit a bicyclist in a bike lane when they need to turn right? Yes.

Will bike lanes make it safer for the bicyclist that uses Peachtree today? Yes.

Will traffic get so bad on Peachtree after the changes are made that neighborhoods will see increased cut-through traffic from cars escaping Peachtree? No.

The modeling indicates traffic improves on Peachtree, and it can handle more cars than it does today.

Anything else that I can think of writing is strictly my opinion. My goal was to better inform yours. I hope this helps.

Note to readers: If you want to share your thoughts about this topic, you may send your comments via email to the Georgia Department of Transportation through Monday, Nov. 9 at the following address: peachtreeproject@dot.ga.gov.