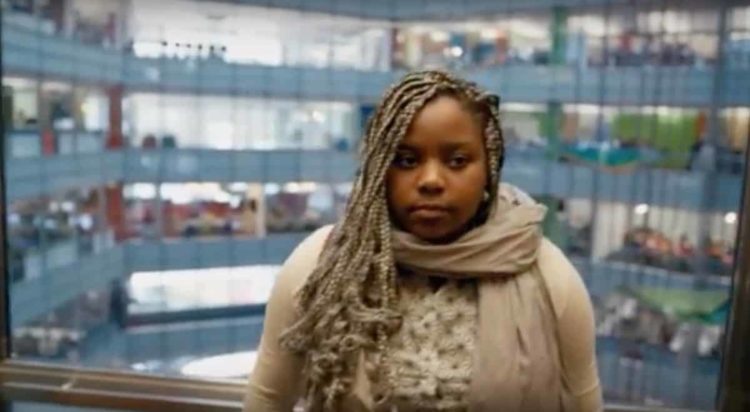 MIT graduate Dextina Booker is working with a start-up in Detroit that manufactures watches. Shinola's website states, 'of all the things we make, American jobs might just be the thing we're most proud of.' Credit: generationstartupthefilm.com, shinola.com

Metro Atlanta ranked 10th in the nation in the proportion of jobs created by start-up companies in 2014, according to a Census report that was overlooked initially, and then overshadowed by another report showing an increase in real household income. 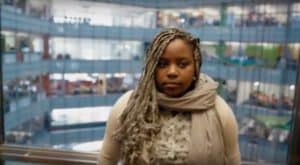 MIT graduate Dextina Booker is working with a start-up in Detroit that manufactures watches. Shinola’s website states, ‘of all the things we make, American jobs might just be the thing we’re most proud of.’ Credit: generationstartupthefilm.com, shinola.com

The overlooked Census report showed that 2.4 percent of metro Atlanta’s employment in 2014 was attributable to start-ups. The total metro employment was 2,189,512, according to the report.

This data point is significant in metro Atlanta. The region’s economy has benefitted from the long-time trend of entrepreneurs moving to Atlanta with a bright idea, opening up shop and hiring at least a few folks to help make the dream come true.

The City of Atlanta has double-downed on its effort to attract entrepreneurs. Invest Atlanta, the city’s development arm, agreed to provide up to $70 million in construction costs of an innovative 230-apartment building dubbed, “Tech Square Tower (The Entrepreneur Dorm)”.

The concept is to provide turn-key housing for students who hope to develop some sort of innovative idea, as well as for entrepreneurs who have an office at Tech Square. Residents are to mingle and brainstorm and have access to an on-site mentor, according to the presentation made in 2014 to the board that oversees Invest Atlanta.

A new movie about start-ups chronicles the experiences of six recent college grads who try to make a go of it in Detroit. “Generation Startup” is directed by Academy Award winner Cy;nthia Wade and award-winning filmmaker Cheryl Miller House. The website includes a positive statement by Arianne Huffington and a call-to-action button that urges viewers to, “Join the Movement.” 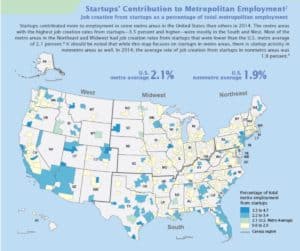 Start-up companies are providing significant numbers of jobs in the South and West. The rate of job creation by start-ups remains far off the pace of pre-Great Recession years. Credit: Census

Like so much news about the economy, the rosy figures for 2014 don’t put the story in context.

The Census adds some data that show the growth remains fairly lackluster compared to years going back to 2004.

Job creation from start-ups in 2014 showed signs of improvement compared to prior years.

But at 2.1 million jobs nationwide, the number is far below the 3.5 million jobs created by start-ups in the pre-Great Recession year of 2006.

In another vantage point, there’s good news in the fact that about half the nation’s cities marked an increase in the number of jobs due to start-ups. This is an increase from the 40.7 percent figure recorded in 2013. But it’s still far below the pre-Great Recession level of 71.6 percent, recorded in 2005.

The final data point observed that the South and west provided the greatest growth in jobs created by start-ups. The metro areas with job creation rates due to start-ups, of 3.5 percent or higher, were all in outside the rust belt. Most metro areas in the North and Midwest had levels below the national metro average of 2.1 percent.

The ranking of metro regions showed the first two slots went to greater Minneapolis and metro Miami, respectively. Both were listed as having 3.3 percent of jobs attributable to start-ups.

The Census report that garnered more attention, including in the presidential campaign, showed that real household income increased 5.2 percent nationwide in 2015, compared to 2-14. The earnings were $56,500 and $53,700, respectively.

Household income was significantly lower in the South, the region that includes Georgia.