JERMYN, PA. – My parents are buried on the banks of a river that passes near Joe Biden’s childhood home in Scranton. 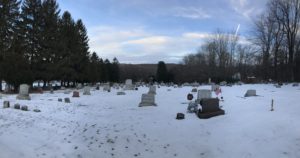 The Jermyn Cemetery is a non-sectarian burial ground on the banks of the Lackawanna River. The author’s paternal family is buried here. Credit: David Pendered

My Dad’s entire family is buried in this cemetery, next to the Lackawanna River. I might end up here, as well.

My Mom’s family is buried down river, in a few other cemeteries that flank the Susquehanna River. The Susquehanna is said to be the longest river on the East Coast, and it provides at least half the water in the Chesapeake Bay. Some of that water comes from the Lackawanna.

I can’t speak to Biden’s ties to Scranton. He calls the place home. In November, he wrote a message on a wall in the still-occupied house where he visited his Mom’s parents after his family had moved to Delaware. The house is walking distance to the Lackawanna. The message reads: “From This House To The White House With The Grace Of God, Joe Biden, 11/3/2020”

I can say that I felt an overwhelming sense of home when my flight approached Scranton on the trip to bury my father in nearby Jermyn, in 1988. I hadn’t been there in 11 years. The sight of ridge-and-valley in the great Wyoming Valley filled places I didn’t know were empty. This is anthracite coal country, hard coal, the fuel of the nation’s Industrial Revolution. 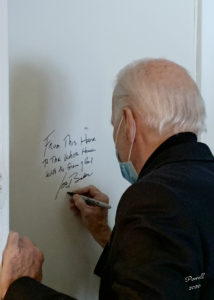 Joe Biden writes, ‘From This House To The White House With The Grace Of God, Joe Biden, 11/3/2020’ on a wall in his childhood home in Scranton, on election day 2020. Credit: © Gigi Holmes/Powell Studio

Marie Antoinette was supposed to find shelter in these hills. She was guillotined in 1793 before she could be spirited out of France to a French refugee settlement. The queen is named in an historic marker on an overlook of a horseshoe bend of the North Branch of the Susquehanna, northwest of Scranton near Wyalusing: “It was hoped that Queen Marie Antoinette might here find safety.”

Scranton today has the settled look of old money earned in the mining, rail and textile industries. Chiseled stone is the common building material in homes, university buildings and Scranton City Hall, the Victorian gothic revival structure built in 1888. Coronavirus refugees from New York are buying up what they can of the homes, according to a neighbor of the old Biden place. Newcomers may help revitalize a region that hasn’t really found its footing since its world ended on Jan. 22, 1959.

That was the day the Susquehanna River burst into a mine shaft and 12 men died. The Knox Coal Co. had ordered the mine beneath the river to be illegally excavated, and the ceiling was within 19 inches of the river bottom when the weight of ice and water broke through the thin layer of rock and flooded a network of shafts. The collapse occurred near Pittston, a dozen miles south of the old Biden place and a mile south of the confluence of the Lackawanna River and the Susquehanna River.

The Knox Mine Disaster ended deep mining in the region and left a mark that lasts to this day. Locals commemorate the anniversary every year, and a TV news report of this year’s event, on Sunday, features footage of the disaster and an interview with Pat Wesley, the daughter of a miner who died in the collapse. The obituary of the last survivor used the word hero in the headline to describe Bill Hastie, to honor his efforts to help save the lives of 69 men during the disaster. Hastie was 101 when he died Nov. 7, 2020. 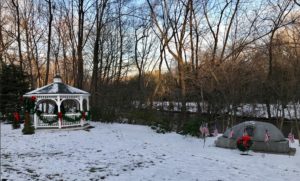 Near the Jermyn Cemetery on a bank of the Lackawanna River, the World War I Veterans Park honors 12 of the burough’s sons killed in the ‘war to end all wars.’ The memorial includes 12 trees and a monument inscribed: ‘Peace is dear but mother is sorrowful.” Credit: David Pendered

From Scranton toward Jermyn, U.S. 6 travels a ridgeline to the south of Meyers and Cary mountains and past the renown Archbald Pothole, created at some point between 11,000 years and 30,000 years ago, during the Wisconsin Glacial Period. The hairpin turn toward Jermyn is the next right. At the foot of the hill, a right turn on Rushbrook Street leads to Chapman Lake. Left goes into Jermyn.

The cemetery isn’t hard to locate, even through the mist of 12 years since Mom was interred here. Jefferson Avenue will lead past my father’s parents’ last home and then it’s a left to Washington Avenue and a few roads down a slight incline toward the Lackawanna River and the cemetery. The stand of trees that marks the spot to park is where it’s supposed to be. The gravestone is not. My sister answers her phone and we wayfind my way to a second stand of trees. The gravestone is there, dusted with snow and sharing the hillside with stony names of those I miss and those I never got to meet. 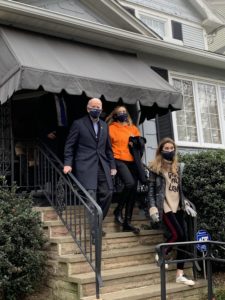 Joe Biden and two of his granddaughters depart his childhood home in Scranton on election day 2020. Credit: © Gigi Holmes/Powell Studio 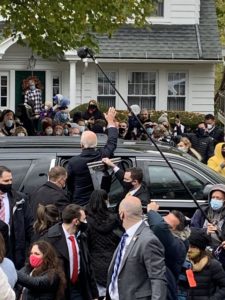 Joe Biden greets well-wishers during his visit to his childhood home in Scranton on election day 2020. Credit: © Gigi Holmes/Powell Studio 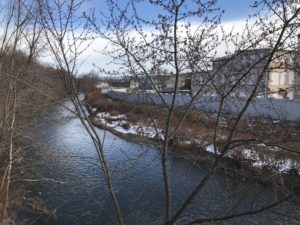 The Lackawanna River rises in northeast Pennsylvania, near the border with New York, and passes Jermyn and this neighborhood of Scranton on its way to join the Susquehanna River. Credit: David Pendered 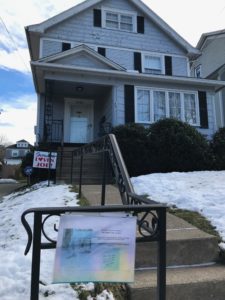 A sign on the front of Joe Biden’s childhood home was placed there by the son of the owner, an elderly woman who welcomes visitors while asking them to respect her privacy. The sign reads: ‘YES, this is the childhood of President-Elect Joe Biden. He lived here until he was 10 years old. Ambrose Finnegan sold the home to the current owner in 1962. You are welcome to take photos from the street or sidewalk. Tag them, (indecipherable).’ Followed by the words Biden inscribed on election day 2020: ‘From This House To The White House With The Grace Of God, Joe Biden, 11/3/2020′ Credit: David Pendered 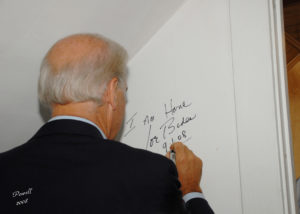 Joe Biden signs his name on a wall of his childhood home in Scranton in September 2008, after he’d suspended his 2008 presidential campaign. © Gigi Holmes/Powell Studio

Previous Article
James Carville: Georgia pulled off the most significant statewide election in the country
Next Article
In this inaugural week, we have not yet come down where we ought to be