Joel Babbit isn’t sure he even believes in Moments, but finally picked a Mother of one 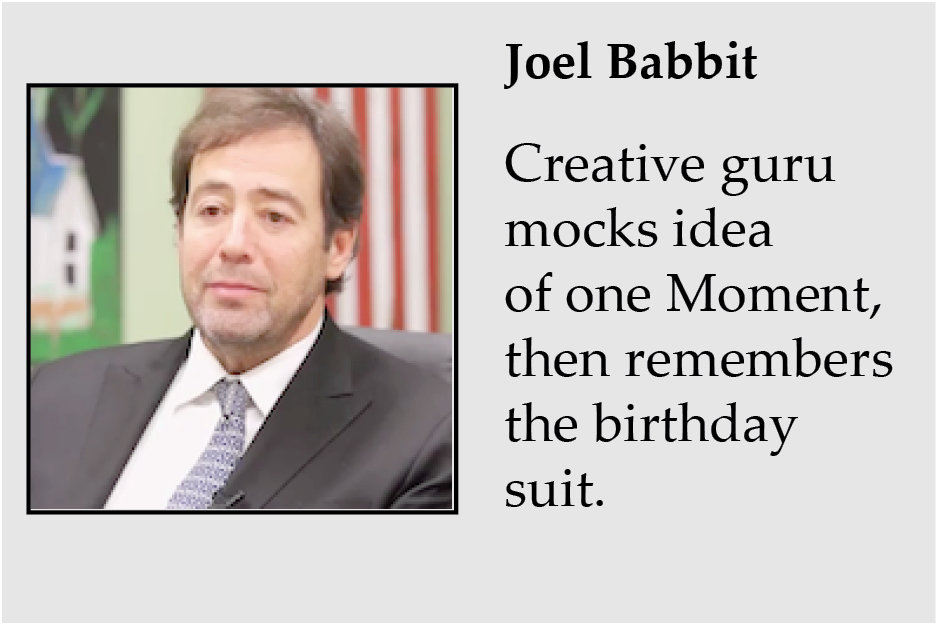 Having now published a dozen installments of Moments, it seemed an appropriate time to visit with Joel Babbit, the ever-inventive viceroy of Atlanta’s creative scene.

Perhaps Joel – who was branded during Atlanta’s run-up to the 1996 Olympics with random ideas such as shining logos from the sky and wrapping stray dogs with advertising or selling corporate naming rights for parks and streets – would share with us a Moment that sent him to the funny side of the street. Joel didn’t disappoint, but a Moment such as that wasn’t what he had in mind. The visionary who co-founded the Mother Nature Network website took us on a metaphysical inquiry of the very Nature of Moments themselves. That’s all I’ll reveal about our accompanying video of Joel’s Moment … your enjoyment of his Mother of a Moment is a mere click away.

The first time I met Joel he had just summoned me to his new advertising agency, then named “360” in Buckhead. In my previous life as a neighborhood newspaper publisher, my merry band of startup pranksters had dreamed up a way to proclaim the launch of our latest journal, Atlanta Downtown: We slipped our inaugural edition in a bag with our Virginia-Highland and Buckhead editions together with advertising rates and some bagels and cream cheese and dropped them on the desks of agency leaders before they opened their office doors. Later that morning I picked up the phone and the man on the line merely said, “This is Joel Babbit, come see me.” As I drove to Buckhead from our office in Downtown’s Flatiron Building, I wasn’t altogether sure we hadn’t offended him by entering his office without permission.

“I spend my life trying to get people’s attention,” he told me when I stood on the other side of his desk. “You’ve now got my attention.”

“Great,” I said. “Would you like to buy some advertising?”

“Actually I was thinking of buying your newspaper group and then my advertising agency will have a vehicle in which to showcase our clients,” he said. As usual, Joel was way ahead of me.

As it turned out, we didn’t sell much advertising in our newest edition and Joel’s partner discouraged him from buying our papers as it might have presented a conflict of interest to his team’s client media recommendations. Yet, a few months after Joel first planted the idea of someone else owning my fledgling, self-mortgaged newspaper company, I realized he had again been prescient. As I started to pinch pennies to keep the papers publishing, I remembered Joel’s offer and soon sold half – and later all – of my interest in the firm to commercial real estate mogul Tom Cousins.

Deciding then to step into public relations, I discovered Joel was already in that space and doing very well. After he grew 360, Joel had picked up the phone one day to find New York-based Grey Advertising on the line. It needed a Southeastern partner to pitch the BellSouth account and Joel’s firm just happened to have handled a small bit of work for the telecom. The partnership stunned the agency world, winning the BellSouth account away from a New York agency that had handled it for decades. So Grey bought 360 and made Joel President of GCI, one of the world’s 10 largest public relations firms with 40 offices in 22 countries. Soon enough, Grey was bought by a British firm and Joel hit the financial jackpot, again.

I once had a client named Frank Argenbright who asked me after we had been working together for a year, “Chris, I’m sure you are the best PR guy in town, but if I was to meet the next best PR guy in town, who would that be?” I knew Frank liked to associate with marquee names so, of course, I introduced him to Joel Babbit over drinks at the Lobster Bar in Buckhead. (This was before I met PR maven Bob Hope, who eventually won Frank’s business, for a little while.)

One day, Joel hatched another great idea: to start an environmental website that would not only be an informational resource for the growing green movement but would cover the industry with news and feature reporting. By the end of that day in 2008, Joel not only rounded up $10 million in investment with a few phone calls, he landed a co-founding partner in Georgia tree farmer, environmental advocate and Rolling Stones keyboardist Chuck Leavell. He gave notice at GCI the next day. The MNN website opened in January 2009 – just a month or so ahead, of course, of SaportaReport’s launch – and it has grown into the number one for-profit environmental site, gaining on non-profit sites such as NOAA and the National Park Service. It just passed the EPA site.

Joel grew up in and went to high school at Druid Hills, earned a journalism degree at Georgia and then at age 33 opened a new agency with Joey Reiman called Babbit & Reiman. It grew into one of the hottest agencies in town before the two sold it. Babbit took his earnings, went to work in New York, returned to Atlanta to work for Mayor Maynard Jackson and eventually opened 360.

Joel had fun resisting our attempts to pin him down on just one of his Moments. Perhaps that’s because he believes his best Moment is yet to come. I’m looking forward to following him then, as I always seem to do, wherever he leads us.

Next week in Moments: To ring in Easter week, an uplifting spiritual Moment with Interior Design doyenne Joyce Fownes of Perkins+Will.

Share
Tweet
Share
Pin
Pocket
WhatsApp
Buffer
Email
Reddit
0 Shares
Tags:
Previous Article
Next Steps for Sprout Space
Next Article
Inside the loop: A look at who’s behind the push for a transportation sales tax