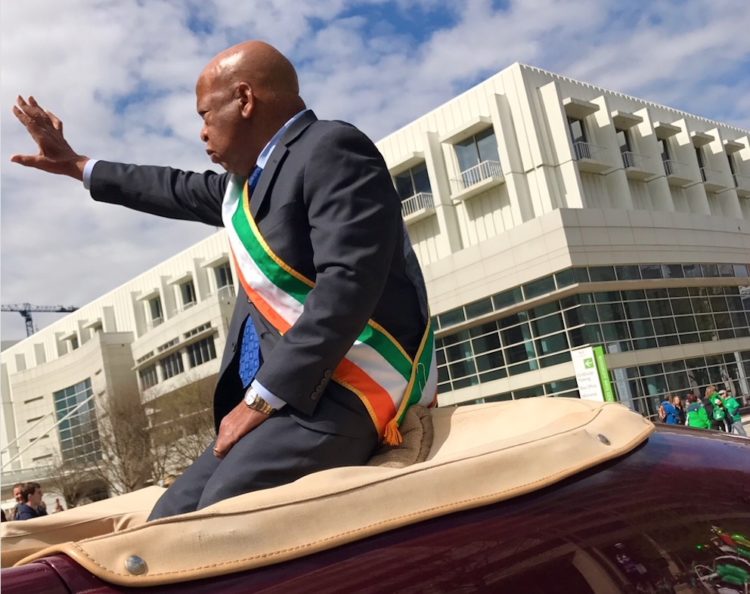 Editor’s note: This story has been updated to correct the name of John Lewis’ co-author.

Atlanta’s tributes to John Lewis are already taking place, with his name being added to East Freedom Parkway and a committee formally announcing its plans for three other tributes to the civil and human rights leader, and Atlanta’s congressional representative since 1987. 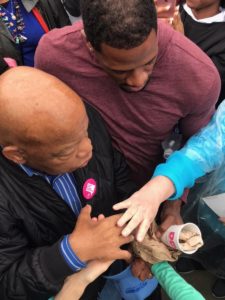 A week after John Lewis said President Trump is not a legitimate president, Lewis was surrounded by supporters as he joined in the Atlanta March for Social Justice and Women. Credit: Kelly Jordan

Lewis earned praise from the dean of the Atlanta City Council, who also served as Lewis’ campaign manager during a run for Congress. Councilmember C.T. Martin spoke during his last regular council meeting. Martin is leaving the council after losing his bid for council president. He has represented a portion of southwest Atlanta since 1990.

“The fortunate work of John Lewis continues on because he lives on, and the enduring spirit of his work,” Martin said. “He was a lovable guy, one of the nicest persons you’d have to deal with, to work with. He had a big heart, a strong heart. This world is better off because John came through here.”

Of note, the council voted to name the natatorium at Adamsville Recreation Center in honor of Martin.

The council voted on one – adding Lewis’ name to Freedom Parkway. The portion of the road between Boulevard and Ponce de Leon Avenue is to be known as John Lewis Freedom Parkway.

After approving the name change, the council voted to deliver the legislation post haste to Atlanta Mayor Kasim Reed. The expedited delivery will get the paper on the mayor’s desk very quickly, which will enable Reed to sign it and notify other governments of the name change.

The Georgia Department of Transportation has already agreed to work swiftly to change the directional signage that is posted above the Downtown Connector, Dickens has said previously. The work is to be completed in 2018, Dickens said. 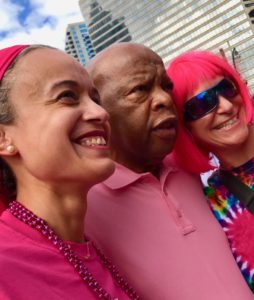 Dickens said the committee worked for eight months to reach its final recommendations. Along the way, members toured Atlanta to see the current tributes to Lewis’ contemporaries. Members collaborated with representatives of the Atlanta History Center and Georgia Tech.

A permanent installation is to be installed in the Atrium of Atlanta’s airport. It will be located on a wall across from an existing presentation on the Civil War, Dickens said. Funding is to be provided from the city’s arts budget.

“That recommendation came out from us wanting to do something big in the world’s biggest, and most efficient, airport, the gateway to the South,” Dickens said. “It’s also going to have digital interactivity that Tech will bring to it – whether in the airport or online.”

At Freedom Park, a display to the Freedom Rides is to be developed with funding from a grant from KaBOOM! The non-profit organization helps fund parks for children, particularly those living in poverty, according to a report on its website.

A story about the Freedom Riders by pbs.org describes Lewis in this way:

The Atlanta History Center is to install a museum-quality tribute to Lewis, Dickens said. 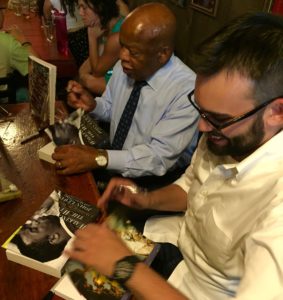 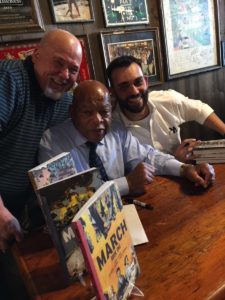 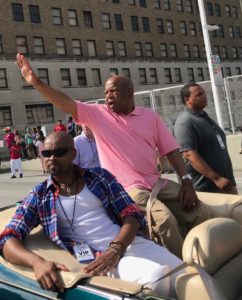 John Lewis is joined by local staff during his ride in the 2017 Pride Parade. Credit: Kelly Jordan 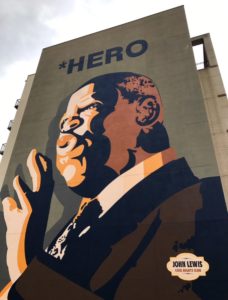