“John Lewis: Good Trouble” isn’t a remarkable documentary, but it doesn’t have to be.

It’s about a remarkable man and that’s more than enough. 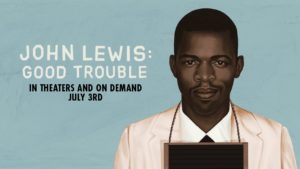 “John Lewis: Good Trouble” – the poster of the recently-released documentary

Part hagiography (writing about the lives of saints), part history lesson, the movie is at its best when it trots out vintage footage – some familiar, much of it not – of the early days of the Civil Rights Movement. Much of what makes it so startling is how recent it is.

It’s the early ‘60s. The Beatles are just a few months away. “To Kill a Mockingbird” has already won Oscars.  Dallas isn’t synonymous with assassination.

And Black people can’t sit at the same lunch counters as everyone else. There are such things as colored rest rooms. It’s nuts – and it’s just, well, the way things are.

“Good Trouble” pays tribute to a generation in general and one man in particular who insisted that’s not how things should be. The film does a fine job of filling us in on Lewis’s past – his Alabama boyhood, how he first became involved with Martin Luther King, Jr., his work as a Freedom Rider, his early political career and, of course, a certain fateful march across a certain fateful bridge in Selma, Alabama.

Something else the documentary does exceptionally well: showing us Lewis at his most off-the-cuff charismatic. In footage of him addressing Congress – familiar from a zillion news clips – Lewis often comes across as stiff, saying pretty much exactly what we expect him to say. 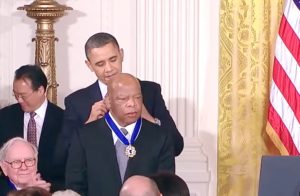 A scene from “John Lewis: Good Trouble” of when President Obama awarded him the Presidential Medal of Freedom in 2011

However, when the camera is just following him around – in one amusing segment, merely walking through the airport takes forever as one admirer after another stops him – we witness his unique presence, his compassion, his sense of humor, his effortless embodiment of something historic and important.

Timing may not be everything, but it helps. Lewis, of course, has just passed away, succumbing to pancreatic cancer.  That makes it easier to accept how uncritical “Good Trouble” is. (Testimony from the usual suspects, such as Nancy Pelosi and Alexandria Ocasio-Cortez doesn’t help).

Still, the present-day politicized footage doesn’t add much. And there’s not a single mention of Andrew Young, which is disappointing and makes one wonder if there’s an untold story there.

If so, that’s probably best saved for another time and another film. Which, hopefully, there will be. For now, “Good Trouble” is the right film at the right time. About a truly righteous man.

Previous Article
Resilience During the Pandemic: The Center for Puppetry Arts Continues Its Storytelling Magic
Next Article
A tragic end