How to find and hike Atlanta’s hidden forests

When it comes to living close to nature, Atlanta rarely measures up to a city like Portland, home to one of the nation’s largest urban nature preserves. Jonah McDonald and his hiking shoes are reinventing our deep-rooted image of a traffic-choked city smothered in asphalt and concrete. 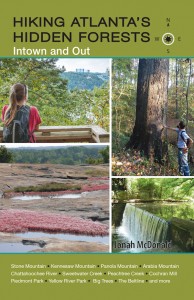 McDonald says it only takes a step into the woods beyond our backyards to begin a genuine pilgrimage into the natural world—yes, here in Atlanta, Georgia.

The outdoorsman points the way for fellow metro Atlantans in “Hiking Atlanta’s Hidden Forests: Intown and Out” (Milestone Press), a reference guide to 60 close-to-home urban forests worthy of exploring. All are located within 30 miles of the Georgia Capitol.

The 330-page paperback, now in its second printing, is a local hit. His session and book signing at last month’s Decatur Book Festival was standing room. The book has also sold upwards of 4,000 copies.

He’s even concluded that hiking in the ATL is better than in Portland, Oregon, where he used to live. “That’s a radical statement. I know,” said McDonald, of his comparison.

McDonald told me this as we walked on a recent Saturday through Ira Melton Park and Mason Mill Park—my woods, which I’ve written about before in this column space.

He pointed out jewelweed, a yellow flowery plant that can be used to treat poison ivy. He identified the giant trees rising up from the banks of the South Fork of Peachtree Creek. They’re river birches, he said.

McDonald also took to me on a path I’d never followed before: a one-mile route that runs along a hill on the opposite side of the CSX line and never intersects itself.  He calls it the Labyrinth Trail. 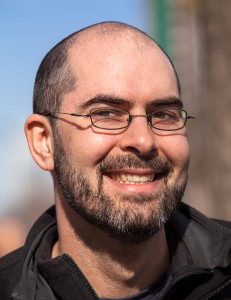 As we walked it, McDonald, 35, told me of his own circuitous journey to find a sense of purpose in life.

At age 22 he felt a drive to change the world. As a young Quaker, he wanted to help fight injustice and inequality. He just didn’t know what that should be.

“I could not waste a single moment,” McDonald said. “If I took a step and it was not in the right direction, I would have wasted this time.”

In that uncertain time in Portland, McDonald worked in a bookstore, and recalled he “kind of stagnated.” To snap out of this malaise, McDonald decided to hike the Appalachian Trail—a pilgrimage to discover how he might make the world better.

About 400 miles into the hike, McDonald said he was getting nowhere.

“One day I just got grumpy, “McDonald said. “I said to myself, ‘I’m not learning anything. I’m just walking on top of this mountain. I don’t want to do this. I’m just going to sit down.’”

McDonald started reading about Mildred Lisette Norman, the “Peace Pilgrim,” who started walking in 1953 to teach peacefulness and continued do so—crossing the U.S. at least eight times—until her death in 1981.

“Be in the moment,” McDonald recalled reading from Norman’s Steps Toward Inner Peace.  “Just focus on the one step in front of you.”

Her words came to him a revelation.

“All I had to do is to take that one step,” McDonald said. “And if I trust that that step has been taken with integrity as where I should be going in my life, then when I’m finished with that step, the next step will be revealed.”

McDonald said he began bounding down the trail like a monk suddenly slapped awake and unaware of his physical discomfort on this grueling journey on foot. In this moment, McDonald said he felt a clear voice from outside himself calling.

After leaving the trail, McDonald stayed on the East Coast. He became a guest lecturer talking about his experiences in the woods, and later a history teacher and director of a wilderness program at a private school.

When McDonald was finished with teaching he founded Sure Foot Adventures, a company that leads hikes and backpacking expeditions in north Georgia and the Southeast.

When he realized that taking kids on a two-hour bus ride to hike wasn’t the best use of time, he began “piecing together” places to hike closer to home, places that made him feel like he was on the AT again. He scoured trails websites and blog posts and consulted Google maps to find any green place. He returned to each trail multiple times.

At the time, he and his wife were expecting their first child.

“Every time I got home, I’d say, ‘This is the best trail in Atlanta,’ and she would roll her eyes and say, ‘That’s what you said last time,’” he said.

The book is his effort to change Atlanta. We don’t go to places we don’t know about. They can even be sacred places to connect to our deeper selves. He has lifted the veil.

He sees himself, and all of us, as part of a big change: “A radical transformation of our city from being thought of as one way to be possibly considered to have other values.”

“People are saying this city is more about just its streets and clubs and the restaurants… I believe we could rebrand ourselves into the city of waterways and a city of forests, really a city within a forest.”

The book and personal story show how much we can discover if we only pay attention to what is in and around us.

“It’s all been guided by taking this one step, and then waiting and seeing what happens,” McDonald said.

He invites you to do the same.

Atlanta housing bond: Investors may buy, but at what price for city taxpayers
David Pendered May 15, 2020 12:30 pm