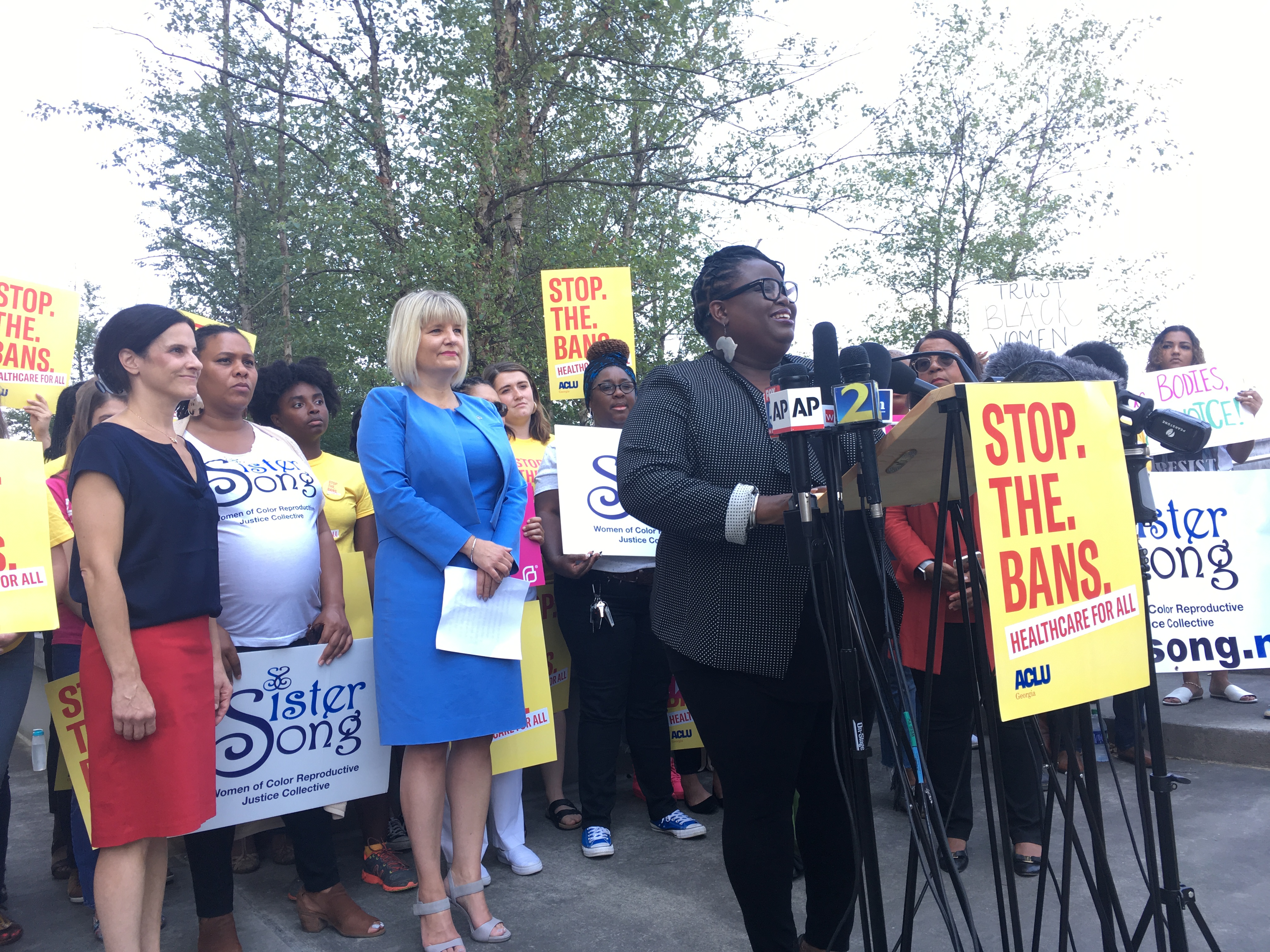 A federal judge in Atlanta says that there’s got to be a day in court for a law that would nearly close the door on abortion in Georgia. 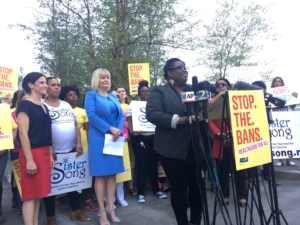 Monica Simpson, executive director of SisterSong, outside the federal courthouse in Atlanta on June 28, the day they and others filed suit against the new law. File/Credit: Maggie Lee

The judge’s order suspends a law a signed by Republican Gov. Brian Kemp in May that would have taken effect on Jan. 1. The new law would have set the cutoff for abortions at about six weeks into pregnancy, with exceptions for cases of rape, incest, a threat to the life of the mother or the viability of the fetus.

The new law would define an embryo at roughly six weeks of gestational age as a person — even allowing a family  claim a personal tax exemption for a child.

Current Georgia law restricts abortion after 20 weeks; and that’s what stands for now.

Opponents headed by ACLU attorneys and SisterSong Women of Color Reproductive Justice Collective sued soon after the law was signed. They argued many points, including that six weeks isn’t enough time to confirm a pregnancy and schedule an abortion. Therefore, they argue, the law amounts to an unconstitutional ban; and is vague anyway.

“The Court also notes that several lower and intermediate federal courts have uniformly and repeatedly struck down similar attempts to ban abortions prior to viability,” reads part of a preliminary injunction order by U.S. District Judge Steve Jones.

He wrote that plaintiffs have established a substantial likelihood of success in their case.

Jones joins federal judges in Ohio, Mississippi and Kentucky who have paused similar laws in those states in 2019 alone.

ACLU of Georgia Legal Director Sean J. Young said in a press release after the ruling: “This case has always been about one thing: letting her decide. Everyone is entitled to their own opinion, but every woman is entitled to her own decision.”

SisterSong tweeted that “We are excited that the court has sided with the women of Georgia. This is about pushing back on attacks on abortion access, but it’s also about reproductive justice and the power of women of color coming together to say we control our bodies and our futures.”

Kemp’s team is reviewing the order, said Candice Broce, the governor’s director of communications and deputy executive counsel, in a statement yesterday evening..

“Despite today’s outcome, we remain confident in our position. We will continue to fight for the unborn and work to ensure that all Georgians have the opportunity to live, grow, and prosper,” Broce said.

The Georgia Life Alliance, a National Right to Life affiliate, supports the new law. On Twitter, GLA called the ruling yet another act of judicial activism against innocent life.

“We will continue defending House Bill 481 to prevent Planned Parenthood Southeast Advocates and the ACLU of Georgia from turning back the clock on human rights in Georgia,” the tweet reads.

The “six weeks” is a rough measure mentioned in House Bill 481, the 2019 bill that set up the new law. Technically, it speaks to a date of “cardiac activity,” by which it means contractions coming from the clump of embryonic cells that will go on to form the heart.

Pregnancy is uniformly measured by doctors from the first day of the patient’s last period, therefore technically, a full-term pregnancy maxes out at 40 weeks, not “nine months.”

Some Georgia district attorneys have said they would not prosecute violations of the new state law, suggesting that it’s ambiguous or unconstitutional.