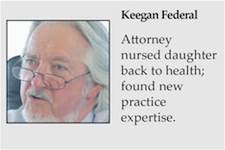 On October 21, 1989, Keegan Federal received a call from Northside Hospital that would change not only his entire family’s life, but would ultimately lead him to add a new specialty to his law practice. His sixteen-year-old daughter, Megan, was in the emergency room, in a coma, with a severe brain injury she had sustained in a car accident. The doctor told him that the prognosis was grim.

“I met with the neurosurgeon late that night around midnight and I asked him how she was doing and he said, ‘We frankly don’t expect her to live,’” Keegan recalled in the filming of our accompanying HD Moments video.

After three days in the hospital, the doctors began to think she might survive, but told her father there was a 95% probability she would be in a “persistent vegetative state” for the remainder of her life. Keegan took several months off from his law practice to help Megan recover. Each day, he stayed at her bedside, held her hand and repeated the same words: “Megan, if you can hear me, just move your finger.”

Eventually, after many weeks, she did move her finger. “At that Moment, I was as proud of her as if she had won a silver medal in the Olympics,” Keegan recalled. He was entirely focused on the medical aspect of her situation and, even as a lawyer, admits he didn’t focus on the legal aspects of her case until months later. All he cared about was her survival and ultimately her rehabilitation and recovery. Today, he urges everyone who might be in a similar situation to stay focused on the recovery, but also to consult a lawyer immediately after an accident to ensure that photos are taken, witnesses are interviewed, and all the evidence is properly collected before it disappears.

As a new driver, Megan Federal loved the thrill of taking her VW bug out for a spin. She had a date with a new boyfriend the afternoon of October 21, 1989, and, in her words, she decided she wanted to impress him, so she offered to be the one to drive.

It had been raining that day and Megan was driving, “probably going too fast” she says, along a wet and winding road, Spalding Drive in north DeKalb County, trying to show off in front of her date. She hit a slick spot in a curve and the convertible began to spin out of control. Recalling what she had learned in driver’s education, she decided to not press on the brakes and she spun full force directly into the trunk of a tree.

Although her passenger was relatively unharmed, Megan spent two months at Northside Hospital, in a coma, before being transferred to Emory’s Rehabilitation Center. (The Shepherd Center had not yet opened its now world-renowned brain injury rehab facility.)

After graduating from Emory Law School in 1966, at age 22, Keegan practiced trial law with Marvin Shoob’s firm for two years. He was called to active duty in ‘68 and defended court martial cases in Fort Gordon, Georgia, and then in Vietnam. Following his service, he practiced law in downtown Atlanta, and eventually started his own trial practice in Decatur.

In 1976, at age 33, Keegan was elected as a Superior Court Judge in DeKalb County. He was the youngest Superior Court Judge in Georgia. He spent the next eight years presiding over felony criminal trials, family law cases, and all types of civil lawsuits. At the end of his second term, he chose to return to private practice and joined Dow Lohnes & Albertson, representing WSB Television and The Atlanta Journal-Constitution, among other clients. After a few years, however, he decided he preferred having his own trial practice firm and opened his offices in 1987.

Keegan’s firm, now styled as Federal & Hasson, LLP, is a trial practice boutique, handling all types of civil and criminal cases including business disputes, real estate cases, family law, and insurance claims, but with a special emphasis on the recovery of monetary damages for clients suffering from catastrophic brain and spinal cord injuries, thanks to his experience dealing with his daughter’s horrific injury and subsequent long-term rehabilitation.

Further demonstrating his commitment, Keegan founded the Brain Injury Family Assistance program in the early ‘90s, which later was transferred to the Brain Injury Association of Georgia. “It’s a first responder support group or support team, manned by volunteer family members of other brain-injured individuals, folks who have already ‘been there, done that’ themselves,” Keegan said. 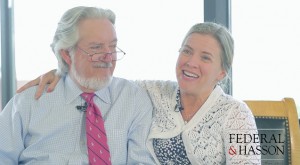 Keegan and Megan last month, a week before her wedding

Fortunately, Megan’s story is now one of hope. Keegan passes that hope along to the people he represents in brain and spinal cord injury cases. Not only did Megan graduate from high school and college after her tragic accident, but just last month married Tom Slipper, a man she met while participating in Toastmasters, an international speaking organization. “Now when people ask me how she’s doing, I’m able to say that ‘Megan’s happier than I’ve seen her since she was three years old,’” Keegan explained.

“Part of my role in representing people in the legal cases involving a loved one with a brain injury is to give them hope and let them know that there is indeed a future even after a very severe brain injury,” said Keegan. “I frequently refer to my daughter Megan as an example of why they should continue to have hope even long after the injury, because my daughter got married recently to a wonderful man.”

Keegan Federal and his daughter Megan made the most of a tragic situation. The Moment that disrupted their family’s life ultimately served as a catalyst for the beginning of a new area of law specialization for him, and an opportunity to make a positive difference in the lives of others dealing with the same issues.

“The Moment that changed my life was when I got the call from Northside Hospital Emergency Room on October 21, 1989,” Keegan said. 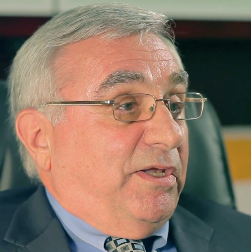 Next week in Moments: Lee Katz, turnaround expert, on an important business lesson he learned as a youngster selling peanuts at Georgia Tech and Atlanta Crackers games.