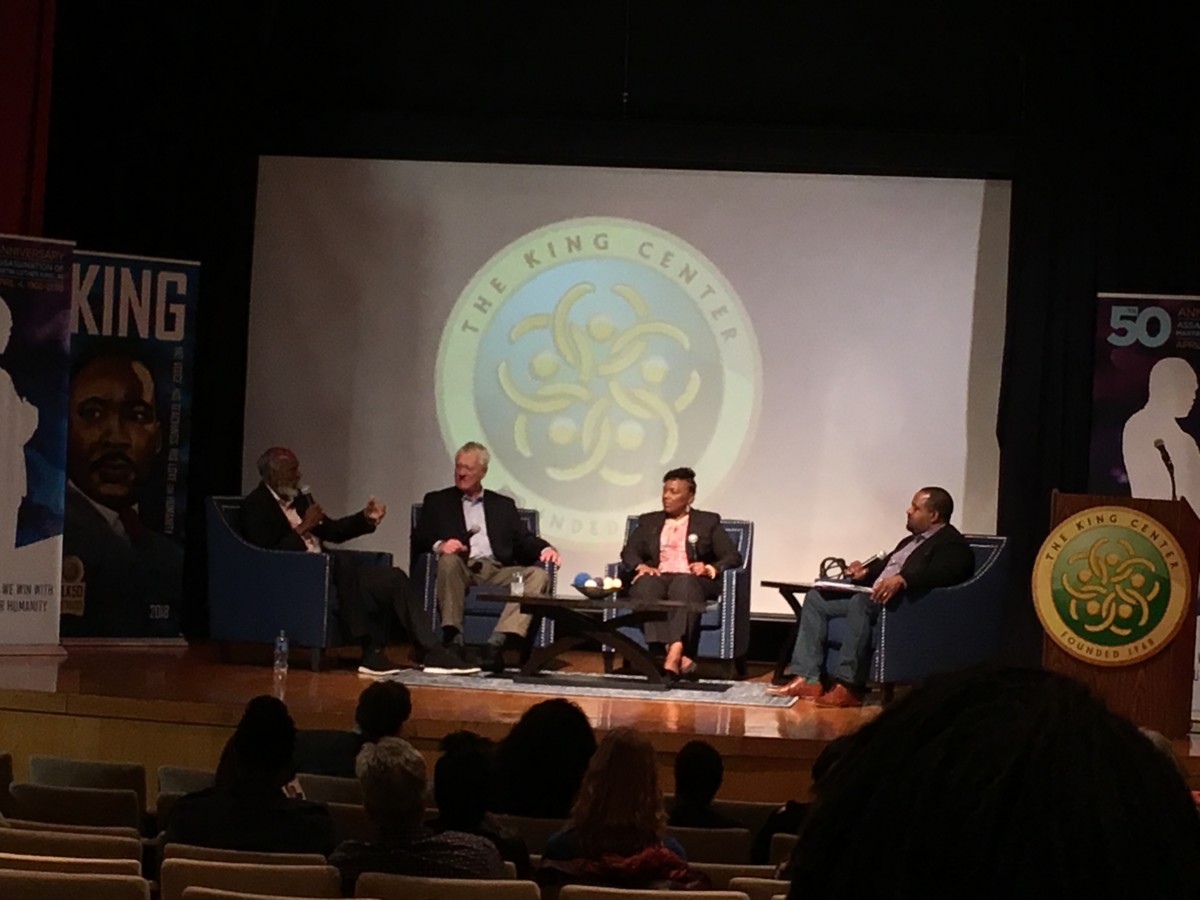 When Bernice King took the stage Thursday night at the center named for her father, she said it’s been a busy week.

But the night was set aside for conversation, one of countless events nationwide marking the 50th anniversary of the assassination of Dr. Martin Luther King Jr.

And there’s a lot to do and to learn, said the panelists gathered at the King Center for Nonviolent Social Change. Their topic: winning together over racism, poverty and militarism. 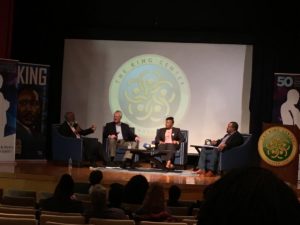 In his last book, “Where do we go from Here: Chaos or Community?,” the late King talked about those “triple evils,” three things he felt threatened peoples’ humanity.

“He knew that if we did not deal with the issue of how we see each other, and how we treat each other, it would be very difficult to overcome those evils,” Bernice King told an audience of perhaps 60 people plus many more watching online.

“He said we must learn to live together as brothers and sisters or together we will be forced to perish as fools,” King said.

And that’s how she introduced a roughly 90-minute forum, one of an ongoing series of Beloved Community Talks. (The video is online.)

She handed off a mic to Joshua DuBois, who led the White House Office of Faith-based and Neighborhood Partnerships under President Barack Obama. DuBois, an author and now CEO of Values Partnerships, a consultancy, moderated the subsequent discussion. It included King, plus George Lakey, a sociologist whose career as an activist and organizer for peaceful social change began in the 1950s. It also included john a. powell, the Director of the Haas Institute for a Fair and Inclusive Society at UC Berkeley.

DuBois asked the panel what people often miss about MLK, about what they should remember. 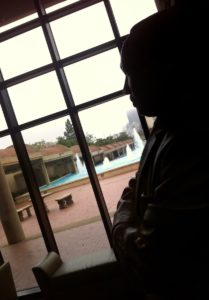 For Lakey, it was King’s edginess, as in, he stepped outward, expanded, looked at where to go next. For powell, it was King’s depth and complexity, that he brought teachings that perhaps even now, people aren’t ready to learn. For Bernice King, it was that her father was a truth-seeker in the process of learning, and understanding the value of learning new things from outside of one’s own tradition.

The topic though, was those three evils. DuBois asked the panel to evaluate how the fight against the three is going.

“I think that’s emblematic of where we are. I say to people, if people of color, young people, women, if we get out there we can turn things around,” said powell.

Lakey was arrested just last week in Philadelphia, as part of a nonviolent campaign to get the local power utility to use solar power, installed first by local workers in high-unemployment areas.

He said he’s seeing potential manifested by women, by groups like the Parkland teens campaigning for tighter gun laws.

“And I think we need to get strategically sharper if we’re to make the most of those opportunities,” Lakey said.

“For example, it’s made such a difference in Philadelphia, we framed our campaign regarding the electrical utility that we’re targeting and turned it in an intersectional way, so that our demand combines economic justice, racial justice and climate justice at the same time. And that is making such a difference to the character of the campaign.”

He also said it’s “sustained” campaigns that deliver the goods.

As time was running out for the forum, King simply said “ditto” to what Lakey said about strategy, saying that it’s severely lacking today.

But earlier in the evening, she had mentioned a contemporary movement.

She said that one of the ways that the country is going to be able to overcome divides that it’s facing, particularly over race, is to have some difficult and courageous conversations.

“We have historically sought to avoid these kinds of conversations,” she said. “But I thank God for the Black Lives Matter movement for really forcing us to look at this issue, to force us to do what daddy said to deal with the last vestiges of racism. One of those areas just happens to be one of the most critical areas, has to do with institutional and systemic racism.”

Official King Center commemorations of the assassination continue this weekend and with the March for Humanity on Monday.