A world-famous and quite wealthy mystery writer named Harlan Thrombey (Christopher Plummer) has been found dead. Apparently, it’s a suicide. His throat has been slit. His hand is on the bloody knife.

And besides, who could take another minute with the gaggle of greedy relatives gathered downstairs for his 85thbirthday party? 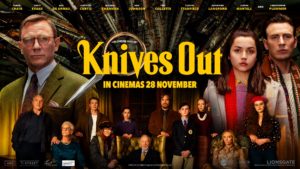 Movie poster of “Knives Out”

‘Knives Out,” which is now available on various streaming devices, insists that murder will out, but in its own way and at its own pace.

Writer/director Rian Johnson (“Looper,” “The Last Jedi”) knows the classic tropes: the aforementioned circle of suspects, the gigantic isolated mansion where they’ve all gathered, the assortment of motives (well, money, money and more money) But while the film initially suggests the jauntiness of “Sleuth,” with its assortment of weird knick-knacks scattered about the family manse, the movie is actually a lot closer to the slightly more serious musings of Agatha Christie.

Not that it’s a “serious” movie – Daniel Craig, as Southern-fried detective Benoit Blanc, is having too much fun for that, as are several of his co-stars. But the picture takes its most sympathetic character and puts her in jeopardy from the get-go.

She’s Marta (Ana de Armas), Harlan’s loyal and kind-hearted nurse. She’s “just like family” according to the others, though none of them can seem to remember if she’s from Paraguay or Uruguay or Costa Rica or, well, one of those places. In fact, she’s so much like family that somehow, she wasn’t invited to the funeral. 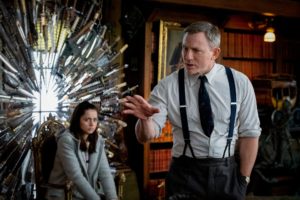 A scene from “Knives out” movie

These sort of social grace notes interest Johnson as much as who actually dunit. And that’s what gives the film its spark and originality. That, and a crackling good supporting cast that ranges from Jamie Lee Curtis’ granddame to Toni Collette’s loopy on-line entrepreneur to Michael Shannon and Don Johnson, both slimily inept. Chris Evans, as the cleverest of the family, may simply be too clever for his own good.

To her credit, Armas, in the difficult role of the Good Person, holds it all together, more perhaps, than is immediately evident. But the donut hole at the center of the donut hole (it’s gobbledygook straight from the movie) is, hands down, Craig.

We are absolutely going to miss him as Bond, but perhaps he’s trying out a new franchise under the unlikely name of Benoit Blanc. I certainly wouldn’t mind.