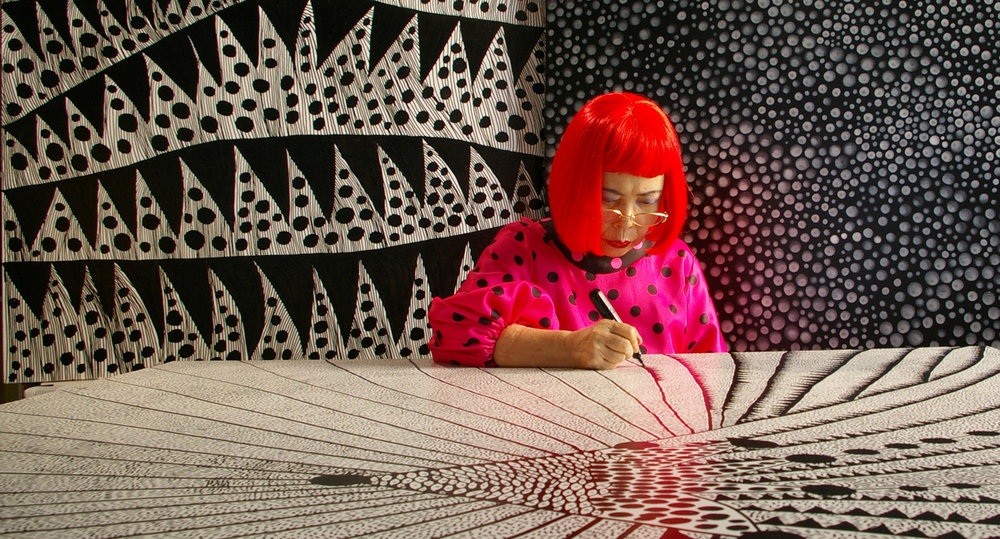 A scene from 'Kasama: Infinity'

To echo the old saying, I don’t know much about art, but I know what I like. However, I know even less about artists, so I had no inkling that I would fall so hard for “Kusama: Infinity,” an extraordinary documentary about Yayoi Kusama, whom I’d never heard of.

Shame on me. She’s the world’s top-selling living female artist. And deservedly so. As Heather Lenz’s movie makes abundantly clear, Kusama is an astonishing original. Trying to describe her work is beyond me —polka dots, for a start (lotsof polka dots) and an artistic vision that borders on hallucination. Howard Finster comes to mind, but minus the tinge of religious ecstasy. 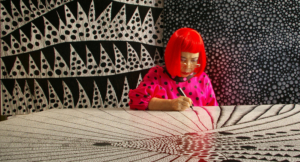 A scene from ‘Kusama: Infinity’

Born in 1929, Kusama grew up with a critical mother and an adulterous father.  She began making art when she was only 10, but no one was interested. She was supposed to marry a wealthy man and that would be that. After her mother took away her drawing materials, the teen wrote Georgia O’Keefe who encouraged her to move to America and “look for opportunities.”

Unfortunately, the New York art scene of the late ‘50s and early ‘60s wasn’t overflowing with opportunities for a young Japanese woman. Even a gorgeous one more than willing to try any and all sorts of outrageous behavior to grab the art world’s attention. Rather, she was ripped off by Claes Oldenburg, who appropriated her soft sculptures, and by Andy Warhol, who helped himself to her concept of repetition.

It all proved too much — even for an artist who typically, when she attended art events, brazenly asked if there was an important man there she could meet. In the mid ‘60s, she was brash enough to crash the Venice Bienniale. Her mirrored balls, sold outside the official exhibition, invited visitors to “buy their own narcissism” (a pre-selfie selfie?).  When officials shut her down, she protested. Why couldn’t she sell her art like ice cream or hot dogs? 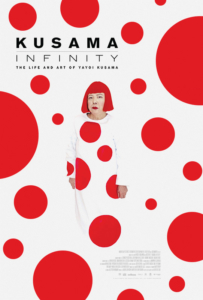 Perhaps inevitably, she attempted suicide, jumping out of a window. But she landed on a bicycle instead of her head.  And she returned to Japan, checking into a psychiatric hospital where she still lives. It’s only two blocks from her studio, where she still works.

The bare bones of her biography are compelling in themselves. After all, who doesn’t like a suicidal artist?

But that’s not what grabs you about “Kusama: Infinity.”  Like her work, the film sneaks up on you. The pieces move from interesting to mesmerizing. True, the broken look in her gaze is disturbing. Yet somehow, it isn’t creepy. At 89, decked out in a red-orange wig, she remains committed to her particular vision.

A major Kusama exhibition has been touring the United States (it opens in Atlanta in November at the High Museum).  It goes without saying it is not to be missed. Neither, for that matter, is “Kusama: Infinity.”

Previous Article
Our debt of gratitude
Next Article
In healthcare debate, words matter, in their connotations and their number